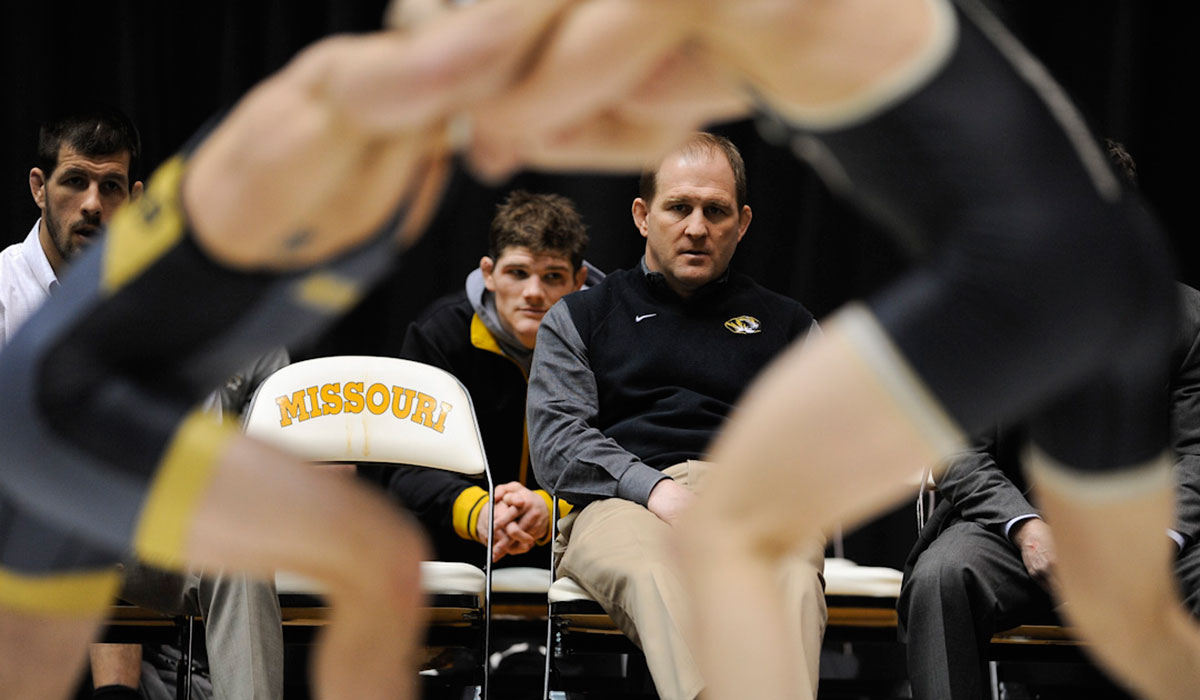 After winning the Missouri Regional Feb. 17, the MU Tigers wrestling team continues its quest to become the 2013 NWCA National Duals Champions this weekend at the University of Minnesota in St. Paul. The Tigers will need to grapple past top-ranked Oklahoma State, No. 4 Minnesota and No. 5 Ohio State if they want to be crowned champions in this year's event. The NWCA Cliff Keen National Championship features eight of the nation’s top-10 teams.

MU faces Ohio State at 6 p.m. Friday, Feb. 22. The second round begins at 1 p.m. Saturday, Feb. 23. The event will conclude with a championship final and a consolation third-place match at 7 p.m.

After winning the Missouri Regional Feb. 17, the Tigers continue their quest to become the 2013 NWCA National Duals Champions this weekend at the University of Minnesota. They will need to grapple past top-ranked Oklahoma State, No. 4 Minnesota and No. 5 Ohio State if they want to be crowned champions in this year's event. MU faces Ohio State at 6 p.m. Friday, Feb. 22. The second round begins at 1 p.m. Saturday, Feb. 23. The event will conclude with a championship final and a consolation third-place match at 7 p.m.

Junior Alan Waters, ranked No. 4 nationally at the 125-pound weight class, shows off his black-and-gold mouthpiece while defeating Purdue's Camden Eppert 15-3 in the opening match of the Tigers' second dual Feb. 17 at the Hearnes Center.

Mizzou's Alan Waters headlocks Purdue's Camden Eppert for three near fall points in the third period of the match.

About 700 fans showed up at the Hearnes Center to cheer on Mizzou at the regional round of the National Duals. A 27-13 win against Maryland set the Tigers up for a match against Purdue, whose wrestlers defeated Wyoming in their first dual.

Senior Nathan McCormick jumps rope after receiving a forfeit in the 133-pound division.

Purdue's Brandon Nelsen shows his hands to the referees against Nicholas Hucke in the 141-pound weight class.

Mizzou fans and wrestlers watch as sophomore Drake Houdashelt, ranked No. 15, scores a technical fall against Frankie Porras in the 149-pound weight class.

Junior Kyle Bradley, ranked No. 16 in the 157-pound weight class, struggles to stay on his feet in a 9-5 loss against Tommy Chuchard.

Sophomore Trevor Wiest faces off against Pat Robinson in the 165-pound division.

Wiest and Robinson pummel for inside control and a chance at a takedown.

With only two dual losses this season, to Central Michigan and Oklahoma State, the Tigers hold on to a No. 6 ranking as they head to the National Dual Finals.

Purdue wresters watch their teammates compete in their second match of the day.

Sophomore Johnny Eblen takes Andrew Wiseman back to the mat and wins 15-2 in the 184-pound division.

The No. 6-ranked Missouri Tigers take a weekend road trip to the University of Minnesota in St. Paul, Minn., Feb, 22-23 for the NWCA Cliff Keen National Championship Meets, featuring eight of the nation’s top-10 teams.

Bradley blows a kiss to Mizzou fans after wrestling his last match at the Hearnes Center. Bradley, a perfect 30-0 on the season, finishes his college wrestling career with an undefeated record at home. The last time Bradley lost in Columbia was in 2004 as a high school freshman at Blue Springs. Bradley is now just four wins shy of joining the 100-win club as a Tiger grappler.

Defeated, Purdue's wrestlers pack their bags and head back to West Lafayette, Indiana.

For the second time in as many days, the Tigers topped a higher-ranked opponent. Saturday night the No. 2 Iowa Hawkeyes fell victim to the No. 6 Tigers in the third place match of the 2013 NWCA Cliff Keen National Duals. Mizzou trailed by seven with three weight classes remaining, but wins by seniors Mike Larson, Brent Haynes, and Dom Bradley propelled the Tigers to victory. Top-ranked Hawkeyes Matt McDonough (125) and Derek St. John (157) both lost to No. 4 Alan Waters and No. 19 Kyle Bradley, respectively.

Junior Alan Waters capped off a fantastic weekend in Minnesota with a win over the No. 1-ranked McDonough. Waters got on the board early with a takedown 30 seconds into the bout, which was all Mizzou's leadoff man needed. Waters added an escape in the second and a riding time point after two minutes of advantage over the top-ranked 125 pounder.