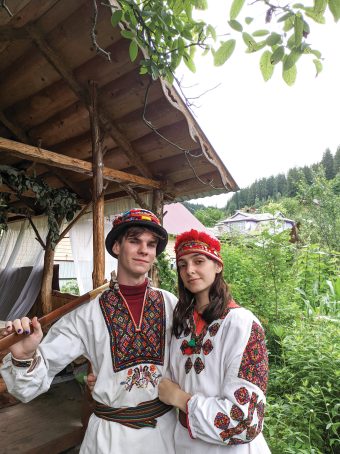 Mizzou students Vlad Sazhen and Alina Rohulia in the Carpathian region of Ukraine in 2021. In late August, Sazhen picked Rohulia up from the
Columbia Regional Airport with a bouquet of flowers and tears in his eyes. Photo courtesy Vlad Sazhen.

When Vlad Sazhen left his hometown of Kharkiv in Ukraine in January 2022, he thought he’d be back in four months. Sure, he’d miss his family and girlfriend, but he was eager to study aerospace engineering at Mizzou through an undergraduate exchange program — one of his professors had worked on a space shuttle!

Then, late one February night, he was sitting in his residence hall, discussing the differences between the states with his roommate, when his phone buzzed. He knew something was wrong before he read the text from his girlfriend, Alina Rohulia: It was only 5 a.m. in Ukraine.

We are getting bombed. We are running to the shelter. I will text you later.

Russia had launched a full-scale invasion of Ukraine. Forces were moving into densely populated areas, including residential districts in Kharkiv. Rohulia and her family sheltered for a week in their basement.

“That whole week, I woke up trembling because I didn’t know what to expect when I unlocked my phone,” Sazhen says. “I could have easily received a message from my mother saying that Alina’s house was bombed and they’re dead. That’s what happens to a lot of Ukrainians. Why should I be an exception?”

More than 5,000 miles away, Sazhen couldn’t just wait for updates. He and fellow student Tori Copto organized a fundraiser on campus and collected donations from local businesses to support the nonprofit United Help Ukraine. Sazhen also requested support to bring Rohulia to MU and to extend his stay on campus. With the help of MU’s International Admissions and International Programs offices, Sazhen and Rohulia were awarded three-year, nonresident tuition scholarships. They also received financial support from the university’s Ukrainian Emergency Fund, to which the Veterans United Foundation made a $103,282 donation this summer.

In late August, Sazhen picked Rohulia up from the Columbia Regional Airport with a bouquet of flowers and tears in his eyes. “It was so surreal,” he says. “I couldn’t believe it.” At Mizzou, Rohulia is majoring in biomedical engineering. The two spend a lot of time at the College of Engineering, where Sazhen works managing the front desk at the Advising Office. When they’re not studying thermodynamics (him) or differential equations (her), they’re at Laws Observatory experimenting with astrophotography.

Office of International Admissions Director Ryan Griffin says it’s been moving to watch the students return to class and campus after such a challenging semester: “They’re inspiring in their persistence in doing everything that they can to try to get their lives back on track, resume their studies and look toward their future careers.” Sazhen says it’s easier to focus on his education now that he and Rohulia are reunited, but they constantly worry about friends and family in Ukraine.

Sazhen’s parents and sister are in Kyiv. Rohulia’s mom is in Poltava, and her dad and brother are in the Ukrainian military.

“Even though our bodies are here, our minds are still in Ukraine,” Sazhen says. “What keeps us going is we compare ourselves to Ukrainian citizens — our brothers and sisters who are actually under shelling and who can’t just close the news app and feel like, ‘Oh, I’m done for the day. I’ll read more tomorrow.’ They are in all of this every day, every second.”