The University of Missouri’s campus is again bustling as students arrive for the new semester. For freshmen and transfer students and their families, move-in day can bring a mix of nerves, excitement and, of course, lots of sweat.

Read on to meet a few new Tigers and learn about where they’re from, what they brought and how they’re ready to make their mark on Mizzou. 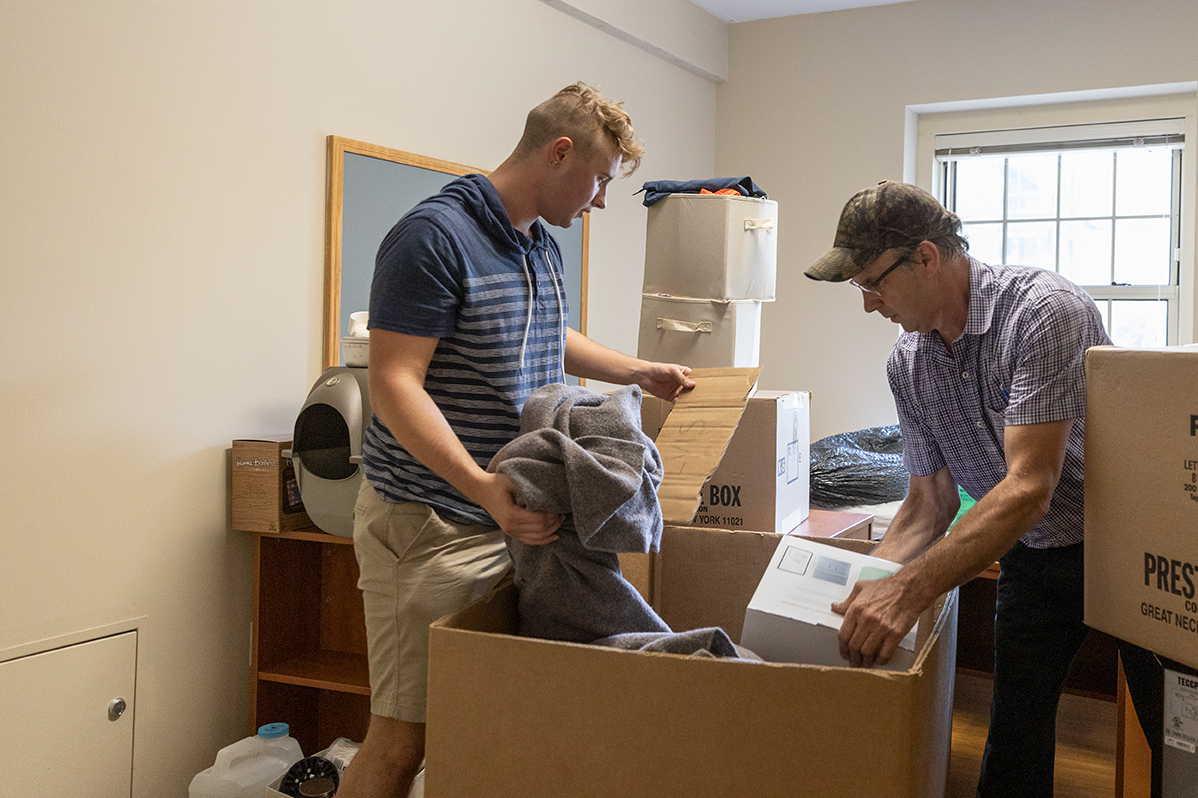 The cardboard carts were piled high, but Tevis Edmiston had a plan. “I’ve mapped out where everything is going to go,” he said. “I’ve already moved the bed.”

In the shade of a side entrance to Defoe-Graham Hall, Edmiston was excited to share why he chose Mizzou. “A lot of places have classes, but not the whole program,” he said about his double major in psychology and women’s and gender studies. “It’s the only thing I’m this passionate about.”

Edmiston is in a single room near the end of the hall. A perfect situation, he said, for someone from a small town getting used to things on a big campus. Along with all the move-in essentials, Edmiston was sure to bring his collection of jewelry and a mirrored cabinet to store it all. “It’s got a light in it,” he said.

As the semester starts, Edmiston said he’s particularly excited for a mythology class. The instructor already sent out some materials and a bit of it was in Latin, a language Edmiston taught himself. Other than that, Edmiston said he’s also eager to find his place at Mizzou. 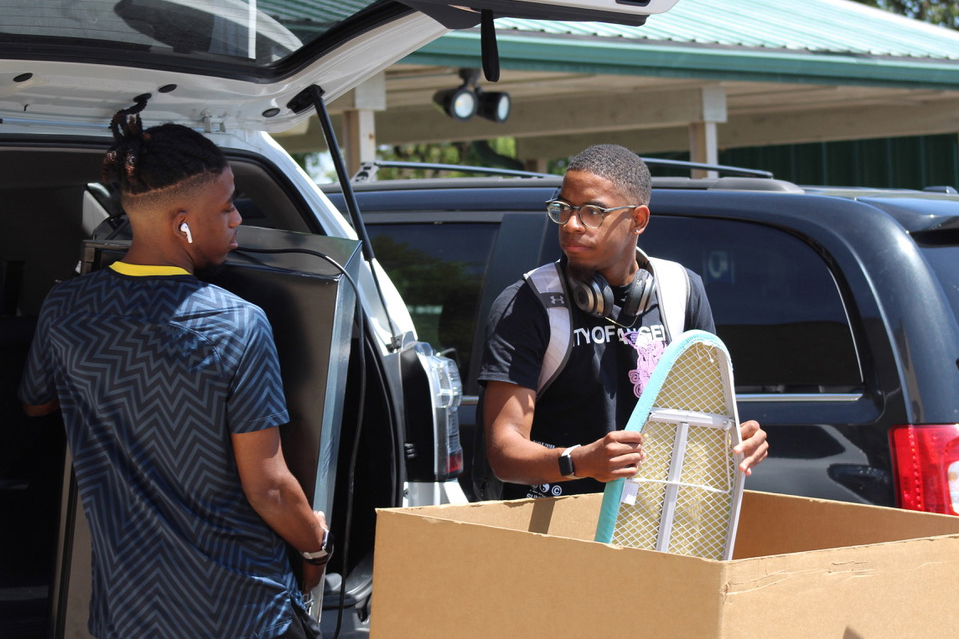 Kamryn Grant might not have started his college career as a Tiger, but he’s set on ending it as one. Grant, a junior transfer student in the College of Engineering and a trumpet player in Marching Mizzou, said visiting his younger cousin on campus and experiencing Mizzou’s atmosphere is what drew him to transfer. “The tours at Mizzou made me feel at home as soon as I got here.” Grant said. “I knew that this is where I wanted to finish my degree.”

Grant was joined for move-in day by his parents and twin brother, Kelly. He said move-in was smooth, just like his transition to Mizzou. “The College of Engineering was so helpful and understanding when helping me pick out my class schedule and figuring out what I needed to finish my degree,” he said.

Even though he only has two years at Mizzou, Grant is looking to make the most of it by meeting new people and getting involved in whatever ways he can. “Marching Mizzou is a family atmosphere that I just knew I had to be a part of,” Grant said. “I’m looking forward to playing in front of fans on Saturdays and also getting involved in rec sports, community service, study groups and more.” 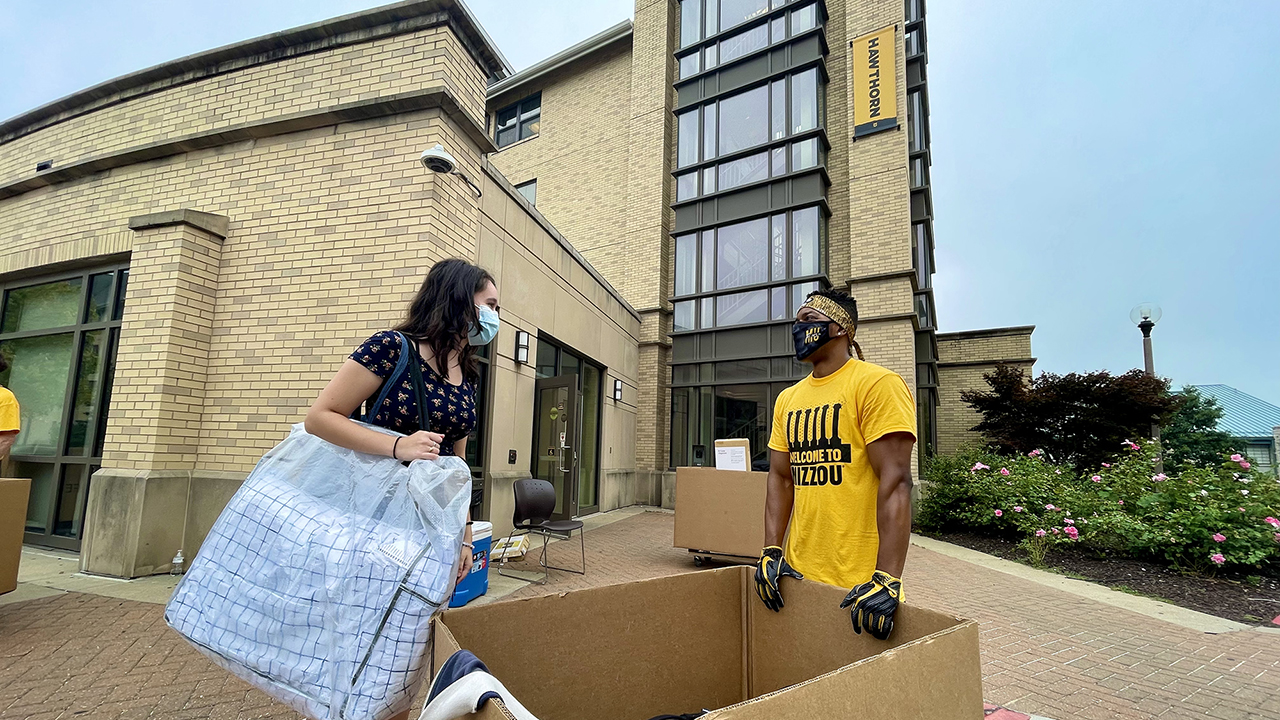 Monica Johnson (left) get helps from a volunteer.

Journalism major from Irvine, California
Hawthorn Hall
It took a week of driving (with a few stops in-between), but Monica Johnson and her family made it safely from California to Columbia. Despite an early move-in slot on Aug. 19, she was ready to hit the ground running.

“I want to make a big impact on the world,” said Johnson, noting she was eager to get involved in campus activism. “As someone who is biracial, it’s important to me to support people of color and the LGBTQ+ community.”

With a background in theater, Johnson has the tools — and stage presence — needed to make a difference. She said she’s also comfortable in front of an audience — a valuable skill that will help her future work in the J-School. Months ago, while on a campus visit, she learned about the opportunities to work at KOMU, Mizzou’s NBC affiliate.

“When I was able to see all the facilities and opportunities I would have access to for broadcast journalism and more, I knew that Mizzou was the best option for me,” she said.

Johnson’s roommate is also from California. They found each other on Instagram and had a chance to meet over the summer. “It’ll be cool to have our own ‘California’ in the dorm,” she said.

Because she attended an arts high school with no sports, Johnson said she’s ready to get out to football games and cheer on the Tigers. “It’ll be crazy to have my first football experience,” she said. “It’s a great opportunity to get involved.” 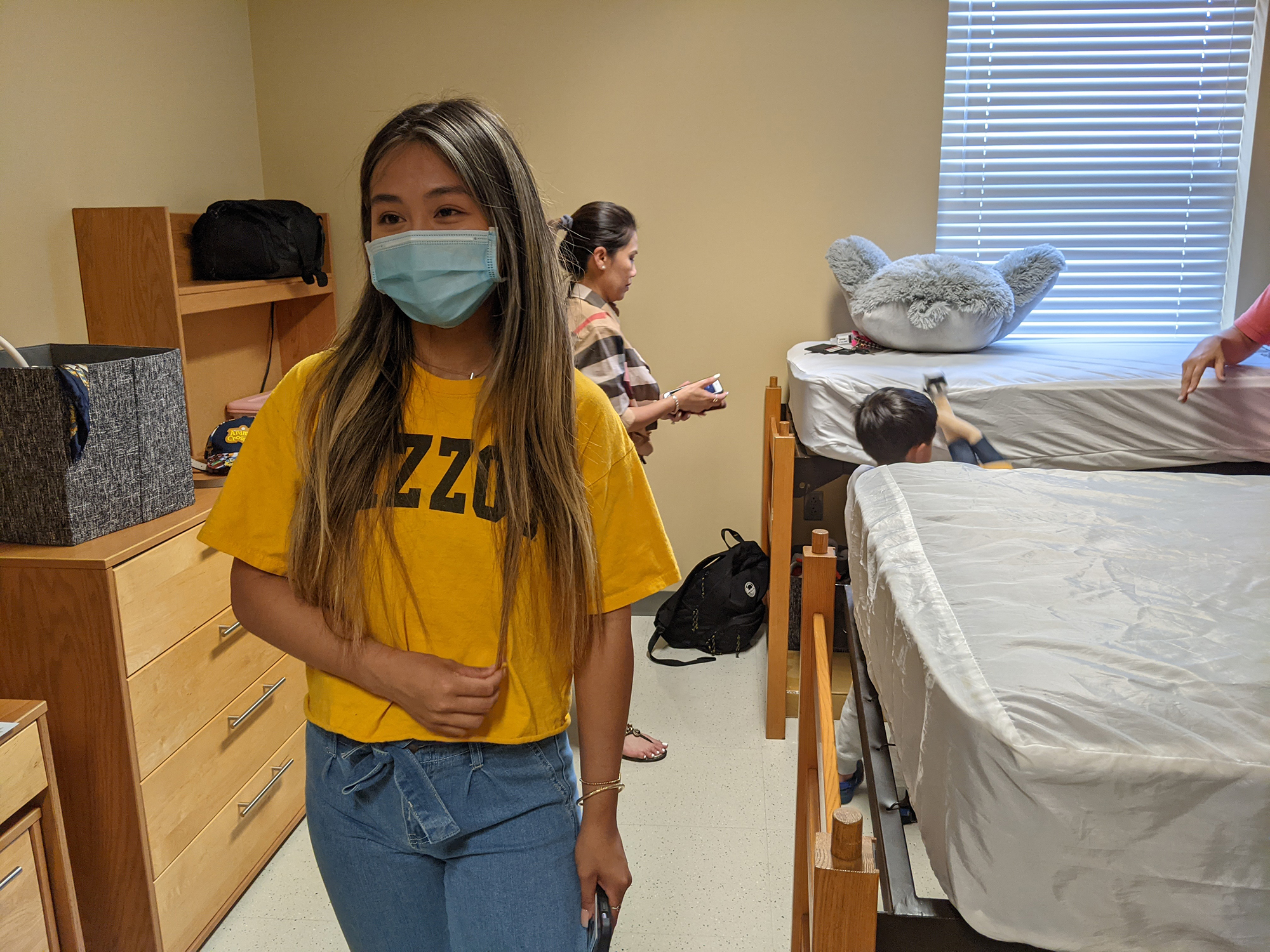 Lena Nguyen had five members of her family on hand to help with move-in.

As one of five siblings, Lena Nguyen said it’s important to set expectations — both for herself and her younger family members. “They want to follow in my footsteps,” she said as her family helped her move into College Avenue Hall on Wednesday, Aug. 18.

Before move-in, Nguyen’s family had only seen photos of Mizzou’s campus. Now, she might have started a Tiger tradition. “They love it here,” she said. “Seeing the Quad is jaw-dropping.”

Nguyen said she’s excited to learn more about her roommate. Though from very different size towns, she said they talked over the summer and have a lot in common. They also settled on a theme for the room: A calming mix of blues and neutrals.

As her half of the room quickly came together, Nguyen said she is excited to see all Mizzou and the surrounding community has to offer.

“Columbia is what you think of when you imagine a college town,” she said. “It’s so homey.” 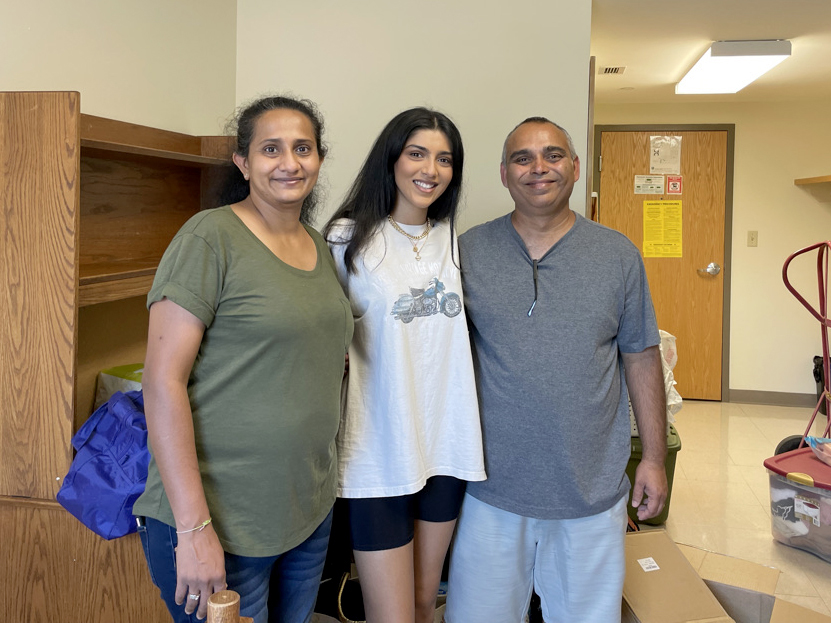 A warm day didn’t put a damper on Gehana Patel’s excitement to move into her new home in Excellence Hall. Patel and her parents made the one-hour drive from Macon, Missouri, to Columbia as part of early move-in on Aug. 14. Patel is a freshman and plans to rush a sorority.

“We got here early because we didn’t know how traffic would be,” Patel said.

In less than 30 minutes, Patel had all her belongings up in her room and was already starting to set up her coffee cart. “Unloading was really quick and easy because there were so many people helping us,” she said.

Patel said she’s most excited about the college environment and meeting new people. “My suitemates and I met up at Summer Welcome, and I’m so excited for them to move in,” she said. “I also can’t wait for rush — I’m excited to go through the entire process.” 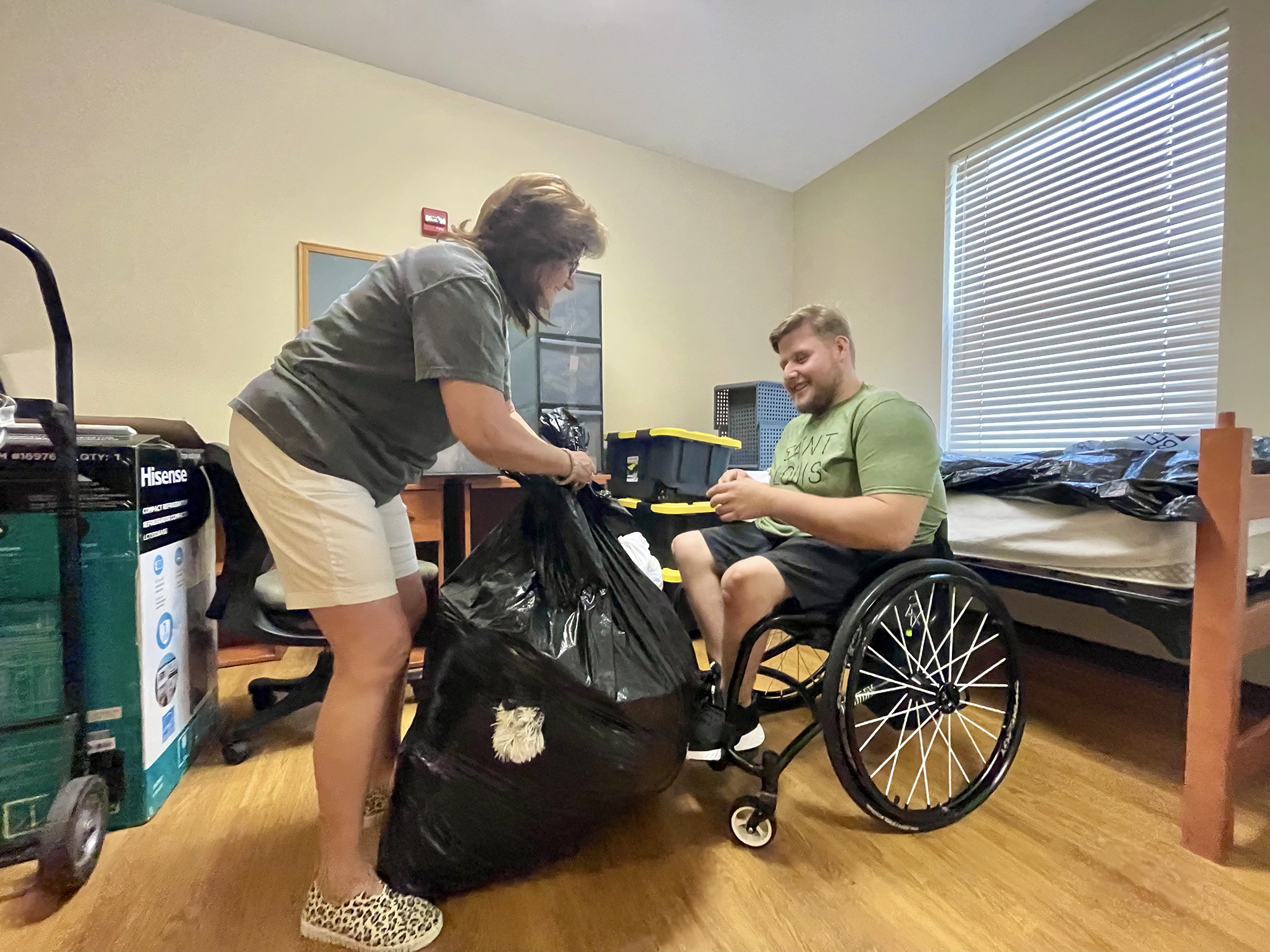 He might be a first-year student, but this isn’t Mack Reed’s first time in Hawthorn Hall. For the past six years, he’s participated in wheelchair basketball camps at Mizzou hosted by Coach Ron Lykins. The first few times, he stayed in Hawthorn and got an up-close look at campus landmarks such as MizzouRec and Plaza 900.

When it came time to choose a school and take his own game to the nextlevel, Mizzou was on the short list. “I came for an athletics visit in March and met all the guys on the team,” Reed said. “I felt good about coming here.”

In the long run, Reed said he wants to start his own adaptive athletics program. But first, he’s eager to spend some time getting to know his teammates and learning more about all that Mizzou has to offer.

“Coach is really school-oriented,” Reed said. “Practice doesn’t start for two weeks, to give us time to figure things out.”