Video gaming experience isn’t a prerequisite at the University of Missouri, but it turned out to be a valuable skill to have for junior Nate Beattie.

When he came to Mizzou, the computer science major and Marching Mizzou tenor saxophonist never thought he’d be controlling a robotic dog in a first-of its-kind halftime show. But that’s exactly what happened at Saturday’s football game — putting Marching Mizzou in the national marching band spotlight.

While Spot’s main purpose is to provide hands-on learning experience for students working on industrial application research, his fluid movement and lifelike charisma lend themselves to artistic expression.

It’s a perfect blend of art and science.

“At Marching Mizzou, we love creativity and being leaders for collegiate marching band activity,” said Amy M. Knopps, director of Marching Mizzou and associate director of bands at the University of Missouri School of Music. “We are proud to partner with the College of Engineering to highlight Spot and the technology available at Mizzou — using this technology to create something that has never been done before at the collegiate level!”

Assembling all the players

Plans for the performance began in June, only a few months after Spot arrived on the MU campus. To help announce the collaboration, Kristofferson Culmer, an assistant professor of professional practice in the College of Engineering’s IT Program, brought Spot to band camp and showed off some of his moves. He then asked for volunteers to help operate the robot during the show.

“I immediately went up after the presentation,” Beattie said. “As an engineer who also has a background in marching, this seemed like the perfect fusion of my interests. I hadn’t worked with Spot before but was eager to try something new.”

The engineering and Marching Mizzou teams worked closely to plan the performance. Beattie would be responsible for marching Spot’s dot — a term used to denote a player’s location in marching drill sheets — for the first and third songs in the show. Information technology student Mason Jenkins would help pre-program a choregraphed dance for Spot to perform with the Golden Girls during the second song. 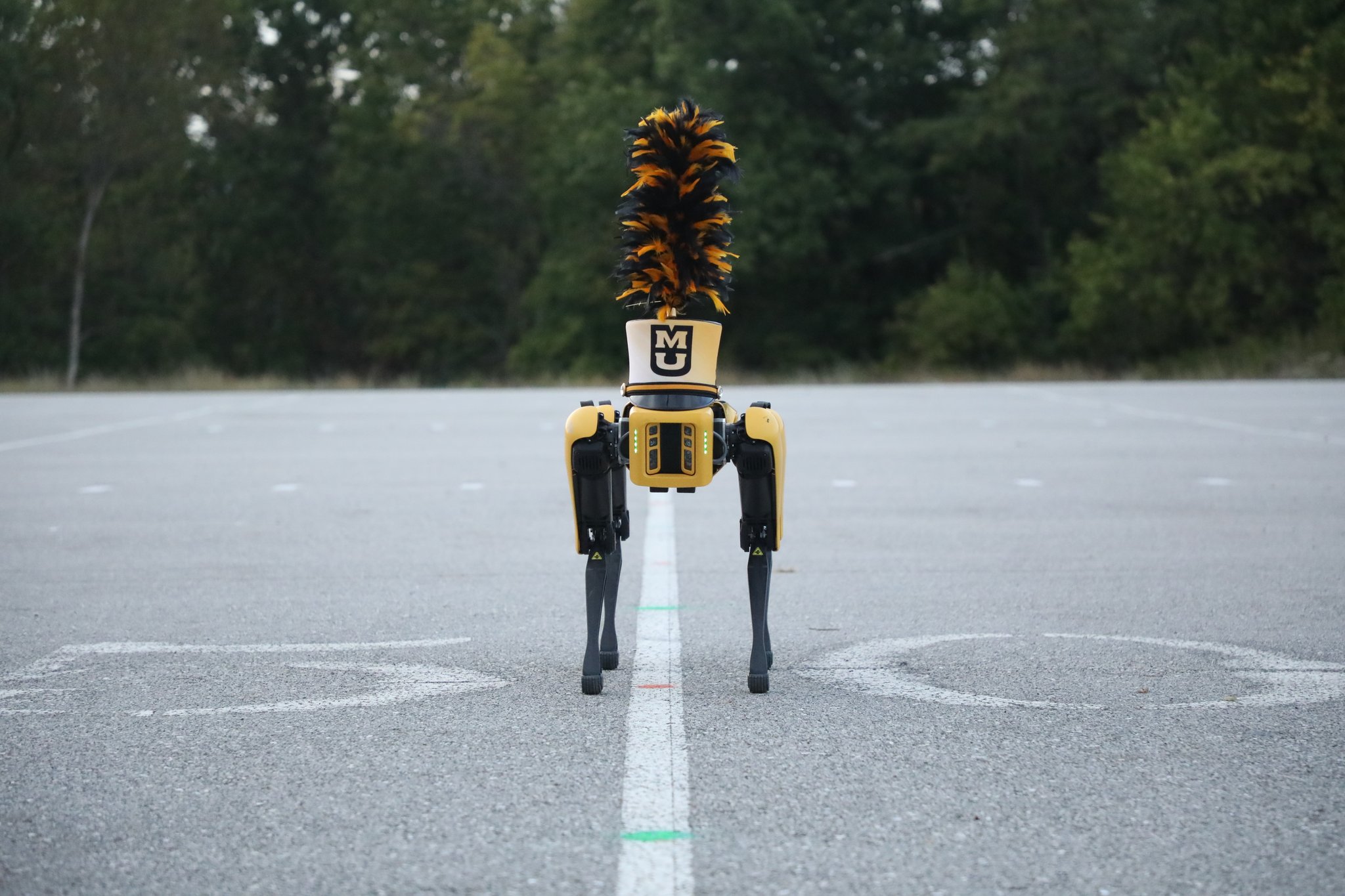 Although Spot's debut marching performance showed off his artistic side, the robot's primary purpose is in the classroom — providing students hands-on experience with emerging technologies.

With all of the players in place, the Marching Mizzou team once again turned to visual designer Josh Boyer to create the drill. Boyer serves as the assistant director of Ohio University’s marching band and writes drills for about 20 bands per year. Although he had never written drills that included a robot, Boyer said he enjoyed the challenge and getting to learn what Spot is capable of.

“I’ve written hundreds of drills over the years, but none quite like this,” Boyer said. “It was exciting to learn what Spot can do and to find ways to incorporate those movements into the performance.”

After listening to the music, Boyer brought the drills he envisioned to life on his computer. “We couldn’t design the drills too early because I have to know exactly how many people are going to be in the show,” he said. “And, because this is a first-of-its-kind performance, we had to get creative about how we programmed Spot’s dot.” All the challenges aside, Boyer worked with Knopps and the engineering team to design two drills over the course of a week.

When it came time to learn the drills, Beattie said his Marching Mizzou experience helped him learn his dot quickly and focus on making sure Spot could hit his mark. Beattie’s experience playing video games also came in handy, as Spot’s controller is much like the ones Beattie grew up playing on. “Learning where I was supposed to go and moving Spot around came pretty naturally,” he said. “It definitely took some adjustment, though, to watch Spot’s position through the cameras on his head — I’m so used to being able to look over my shoulder and see the person next to me.” 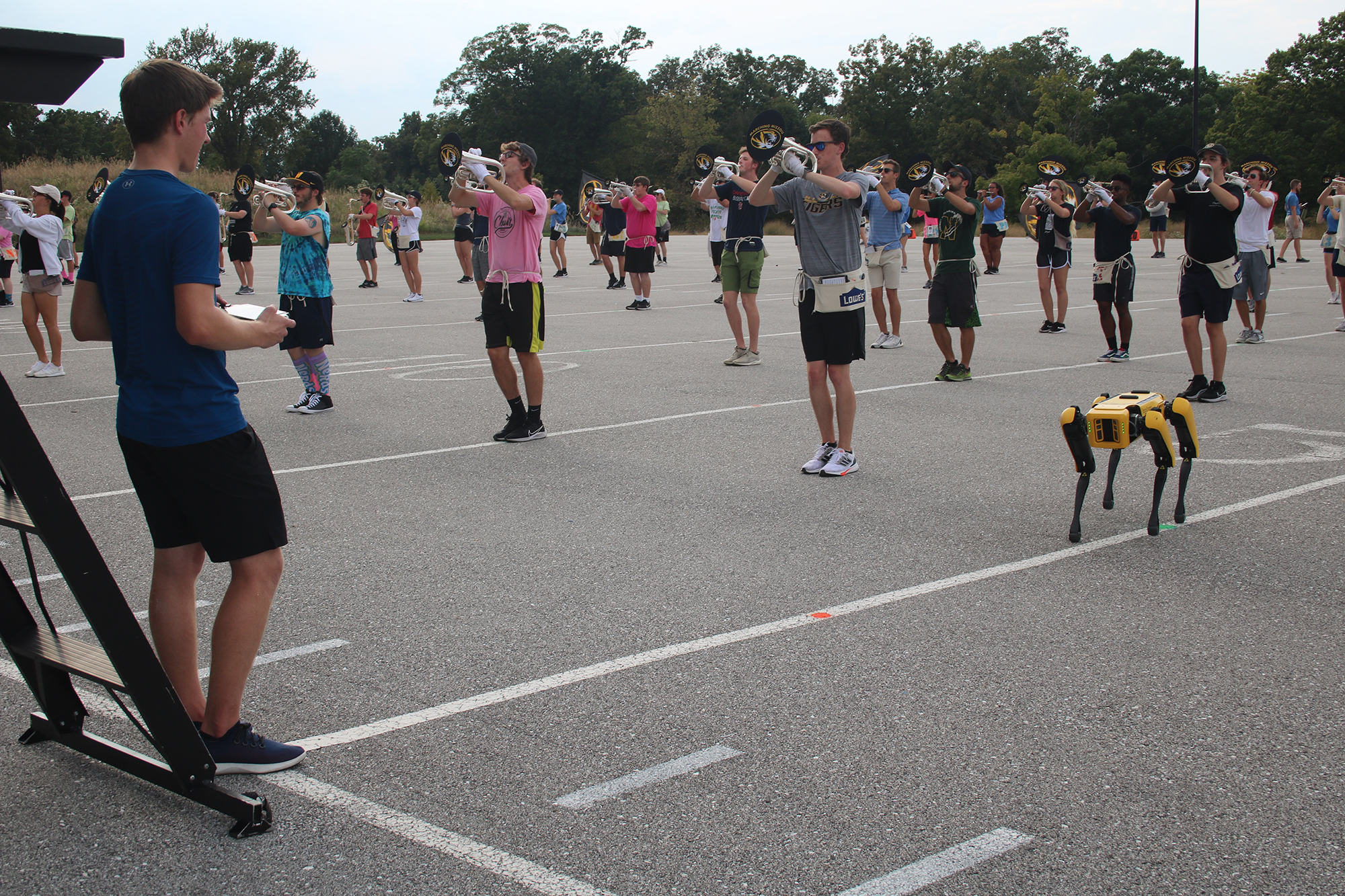 While Beattie focused on getting the marching portion of the drill down, Culmer and Jenkins worked with Golden Girls coach Cayla Timberlake to choreograph a dance for the show’s second song, Dancing Machine. “It was eye-opening to work with the engineering team and to see them code in real-time,” Timberlake said. “It really made me appreciate the research that they’re doing with Spot outside of this performance.”

While a normal routine takes anywhere from two to six hours to choreograph, Timberlake said the routine with Spot took weeks to create and many workshops in the Autonomous Systems Lab. “There was a lot of trial and error involved — a lot of patience,” she said. “But nothing like this has ever been done before and it was wonderful collaborating with a campus entity we’d not normally overlap with.” 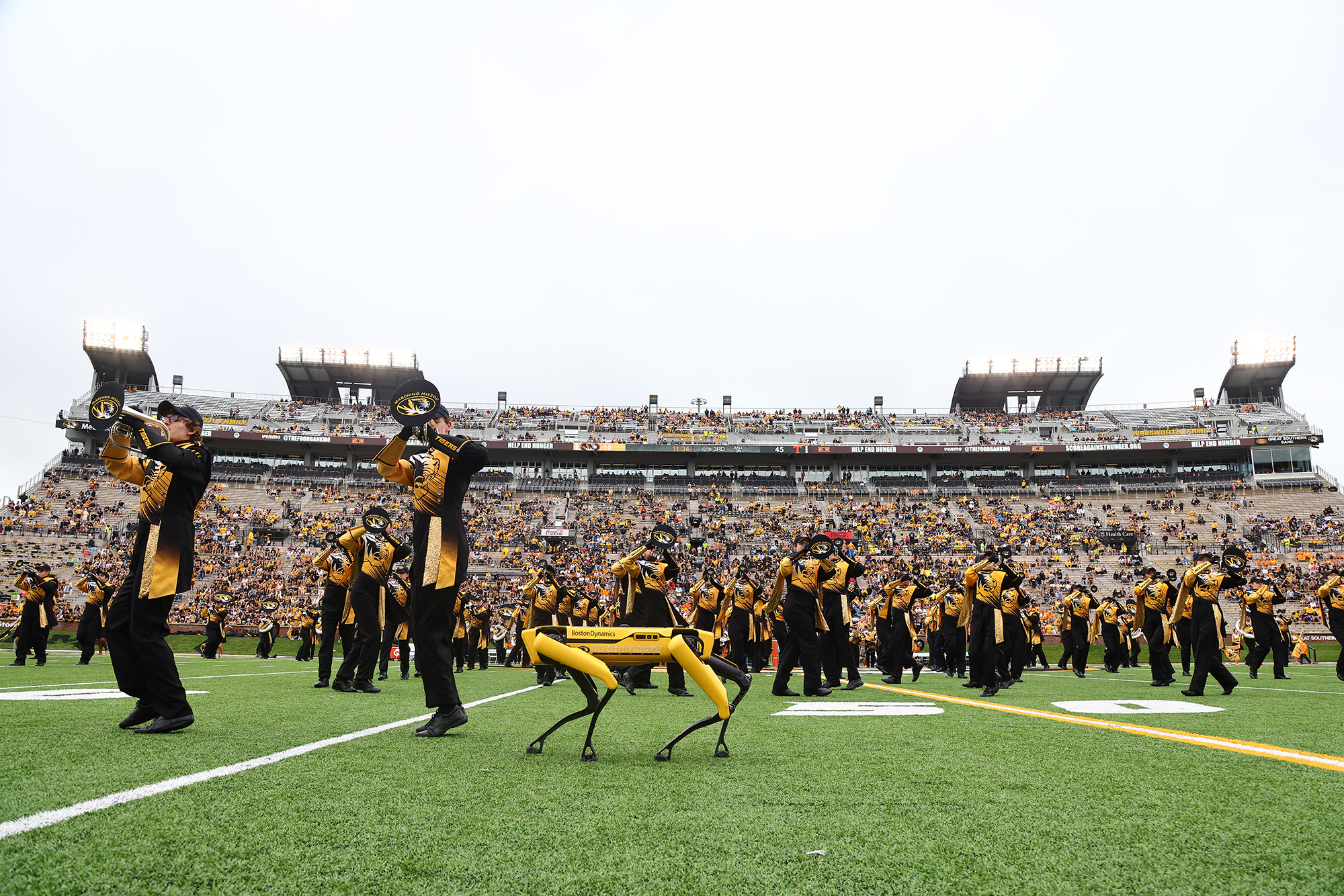 The future of marching and autonomous systems

After months of collaboration, problem-solving and patience, Spot — and Marching Mizzou — made history by becoming the first collegiate marching band to perform a halftime show with a four-legged agile robot. It received national attention, including coverage in outlets such as CollegeMarching.com and ESPN.

“Because our world is becoming more technologically integrated, we’re going to see a melding of hard sciences with the arts and humanities,” Culmer said. “We are grateful to Marching Mizzou for the opportunity to collaborate on this performance and we hope we’ve piqued people’s interest in autonomous systems and Spot’s real-world applications.”

As for Beattie, he said this is a performance he won’t soon forget. “I came to Mizzou for these types of opportunities,” he said. “Being a part of this has given me such pride in Mizzou, the College of Engineering and Marching Mizzou. I can’t wait to see what collaborations Marching Mizzou will come up with next.”