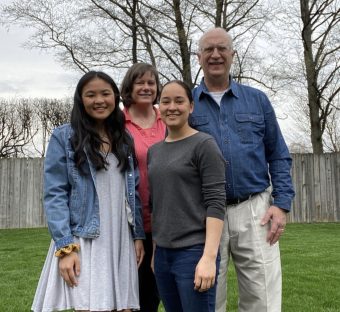 The impact of COVID-19 hit home for Anna Freeman, a sophomore majoring in architectural studies and minoring in business, when the University of Missouri notified her in mid-March that classes would be remote for the rest of the semester.

“This is serious,” Freeman said. “This isn't just a couple cases in California. This a pandemic. I realized how important and essential the medical professions are, and even people who work at grocery stores and supermarkets.”

Returning home to Naperville, Illinois, Freeman and her family decided to turn their concern into action and reach out to front-line workers. While in quarantine, they’ve been sending encouragement by mail to nurses and restaurant workers who have been affected by the pandemic.

For Freeman, adjusting to her online, architectural classes has been a challenge since she’s used to drawing sketches and collaborating with her peers in a studio. However, the architectural professors have been “phenomenal” at helping the students through the adjustment.

“I think the thing they’re most focused on is how our stress levels are doing,” she said. “They care about us and how we're doing mentally before they care about our schoolwork. That’s amazing because when we feel that our professors care, it's a lot easier to be able to produce the work that they would like us to give them.”

“I love having Anna home with me from college,” he said. “It's been really, really nice being together with my family.”

With everyone studying and working from home, the Freemans have been able to show how much they appreciate the people who are still working directly with the public. The nurses in the Edward Hospital Intensive Care Unit enjoy their burritos from Jalapeño Grill that the Freemans sent to them.

The idea of reaching out to the front line started when the family began reading social media posts from local health care workers detailing their struggles. Anna Freeman realized how intense the hospital environment was when she saw pictures of exhausted health care workers, their faces heavily creased from hours of wearing protective masks.

Around the same time, one of the Freemans’ neighbors, who owns a restaurant called Jalapeño Grill, shared that their business was being negatively affected by the virus.

Mary Freeman, Anna’s mother, hatched the idea to help both health care workers and the restaurant at the same time by purchasing burritos from the grill and sending them to the nurses in the Edward Hospital Intensive Care Unit.