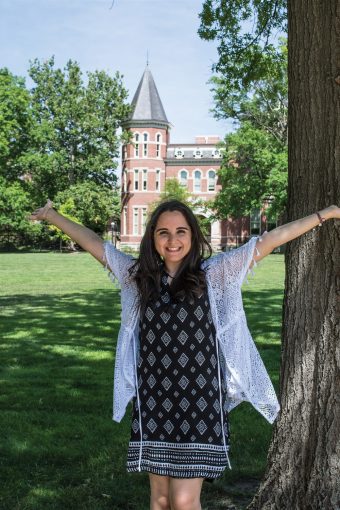 Exchange a few friendly words with Dina Ahmed and you’ll notice she radiates enthusiasm and confidence. But she wasn’t always that way.

Coming to Mizzou as an international student from Cairo, she learned to “get outside of her comfort zone.” That notion turned into a mantra, which then became her life’s theme.

“I like to tell Mizzou freshmen to try different things,” says the junior chemical engineering major. “It won’t only affect your personal life, it will also improve your academics. It makes you learn how to be independent.”

“Mizzou does a great job of reaching out to new students,” says Ahmed, who also has a summer internship as a research assistant. “I spend a lot of time at the MU International Center, and I try to reach out to freshmen, too.”

Now she has countless international and American friends, and her bestie from China even joined her in fasting for Ramadan 2018, Ahmed’s first away from Egypt. She worships at the Islamic Center of Central Missouri.

“At first, I was anxious about not fitting in or having a community,” says Ahmed, who is here on a USAID scholarship for Middle Eastern women pursuing careers in science, technology, engineering and math. “I had an urge to prove myself without losing my identity.”

Ahmed misses her tight-knit family, especially her twin sister, Donia. But Columbia has become a second home — and a home base for further exploration. She has spent time in Washington, D.C., and Chicago, and she has plans to visit Colorado and beyond in the near future.

“Columbia’s location in the middle of the U.S. is perfect,” Ahmed says. “You can travel anywhere inexpensively with good accommodations. I would tell incoming international students to explore other things, explore yourself, explore your culture and your religion. I love that word — explore!”