It was 100 years ago today that the University of Missouri’s Combined Cooling Heat and Power Plant (CCHP) began supplying the energy required to support the educational, research and health care missions of the university.

The history of energy innovation at MU began in 1882 when Thomas Edison gifted then-University President Samuel Laws an electric dynamo and incandescent lamps. MU Professor Benjamin Thomas and his students installed the electric lights and dynamo in Academic Hall, powered by a steam boiler in the basement, making the MU campus the first to display and operate Edison’s electric lighting west of the Mississippi River. 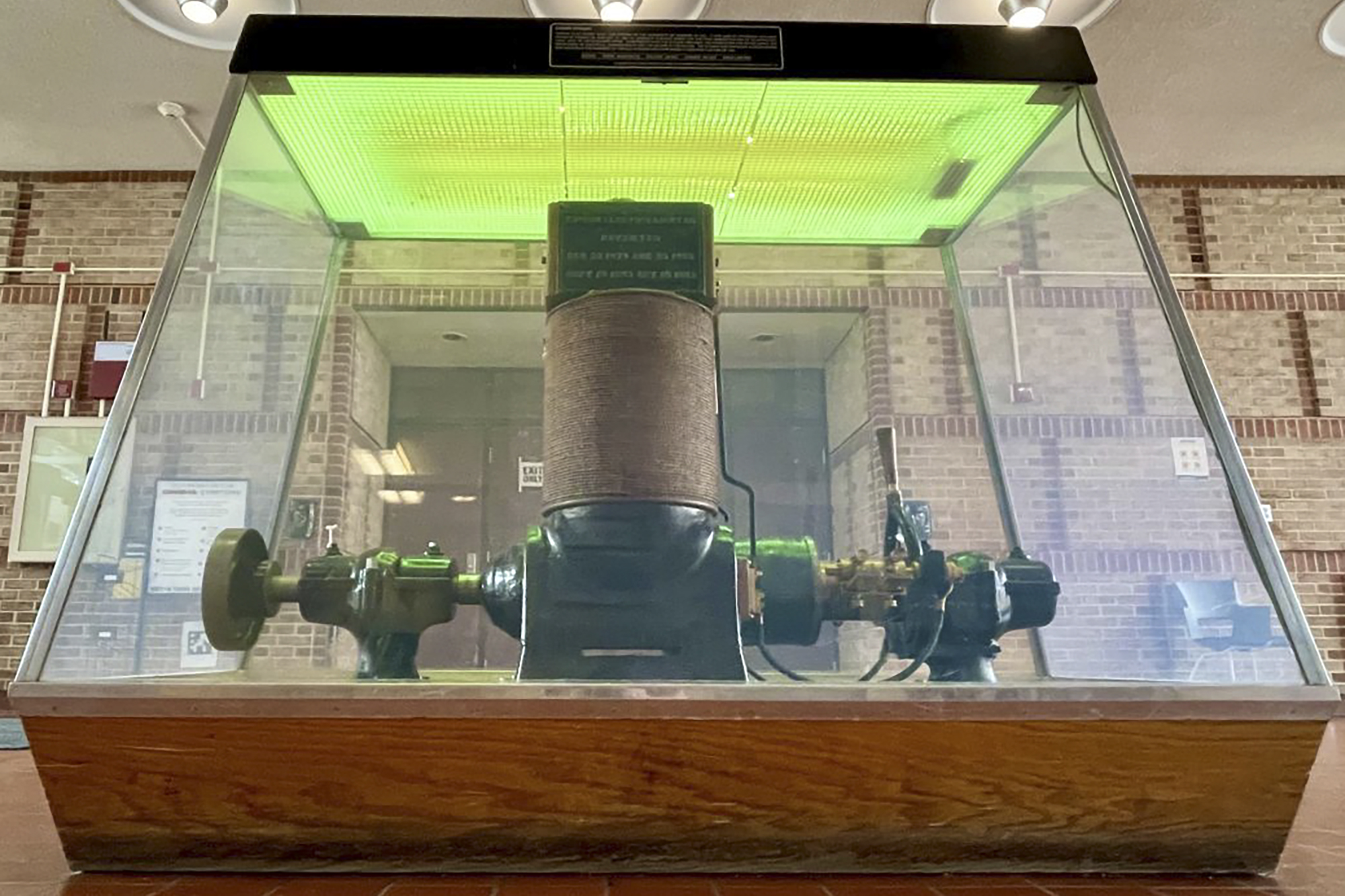 The University of Missouri’s original electric dynamo is on display in the College of Engineering’s Naka Hall.

Following the historic burning of Academic Hall in 1892, the University’s Board of Curators adopted a campus master plan for six new buildings to be erected in its place along the quadrangle. One of the six new buildings was a central powerhouse, equipped with a boiler and engine used for heating and power purposes. This first centrally combined heat and power plant provided heat and electricity to the quadrangle of buildings which included the new Jesse Hall.

In the early years, CCHP was fueled by coal as the primary source of energy. Over the years, the plant has transitioned to cleaner and sustainable fuels of natural gas, biomass and wind. Biomass was first introduced as a fuel source in 2005, and a new 100% biomass boiler was constructed in 2013. This shift in energy sources and the installation of new technologies have made the MU CCHP one of the EPA’s Green Power top on-site generation partners and number 22 among the EPA’s Green Power top 30 College and University Partners in October 2022.

The CCHP also provides an on-campus opportunity for researchers to experiment with different biomass products to find new renewable energy sources. The plant has experimented with corncobs, used tires, waste wood and switchgrass as fuels, to name a few.

These innovations have allowed the university to diversify energy sources to create resiliency and reliability for the critical research and medical services on campus. Over the years, CCHP has been a strong partner in the university’s sustainability efforts and work towards being carbon neutral. Today, up to 40% of the energy MU uses each year comes from renewable sources that include biomass, wind power and solar.

The MU Division of Energy Management oversees the complex interconnected system that powers the campus community. Each part of the energy system works in conjunction with one another to create a synergistic network fueling the campus. 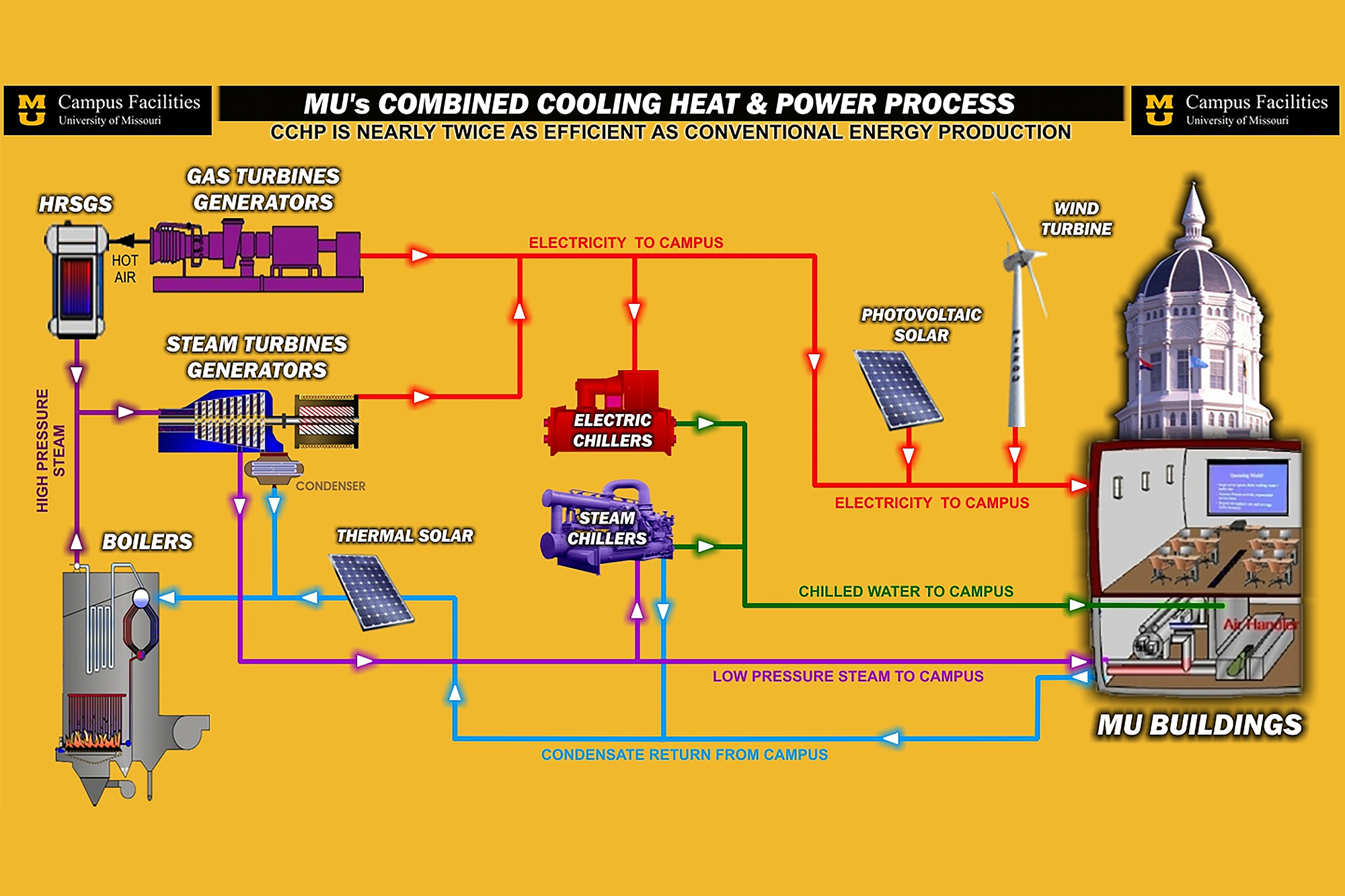 Steam is produced both in boilers and by capturing the waste exhaust heat of the gas-turbine generators. Campus steam is distributed through more than 26 miles of underground steam and condensate return-piping systems and is used for heating, sterilization, production of chilled water, cleaning, humidification and other thermal energy uses.

Electricity is produced in steam and natural gas turbine generators. Electricity is distributed through powerlines in underground duct banks for enhanced reliability and campus aesthetics. Reliability is especially important for critical facilities such as MU Health Care, the MU Research Reactor and data and telecommunication centers.

The campus district cooling system produces and distributes chilled water to air condition campus buildings and provide process cooling for research. Containing 32,000 tons of cooling capacity, the system uses both electric and steam-driven chillers. This same steam that was used to produce electricity in the turbine generators is used to make chilled water, all part of the highly efficient CCHP process, which is nearly twice as efficient as conventional energy production.

Five drinking water wells across campus pump water to pumping station storage reservoirs. After disinfecting the water, it is pumped through a 30-mile piping system to all campus buildings. Since 1990, water conservation efforts across campus have reduced water consumption by 56%.

Over the years the campus continues to grow. Since 1990, the education and general building space has increased by 54% gross square feet (GSF). Even with this continued growth, the campus has seen a decrease in energy use of 8% per GSF, thanks to aggressive energy conservation efforts, HVAC controls and building automation.