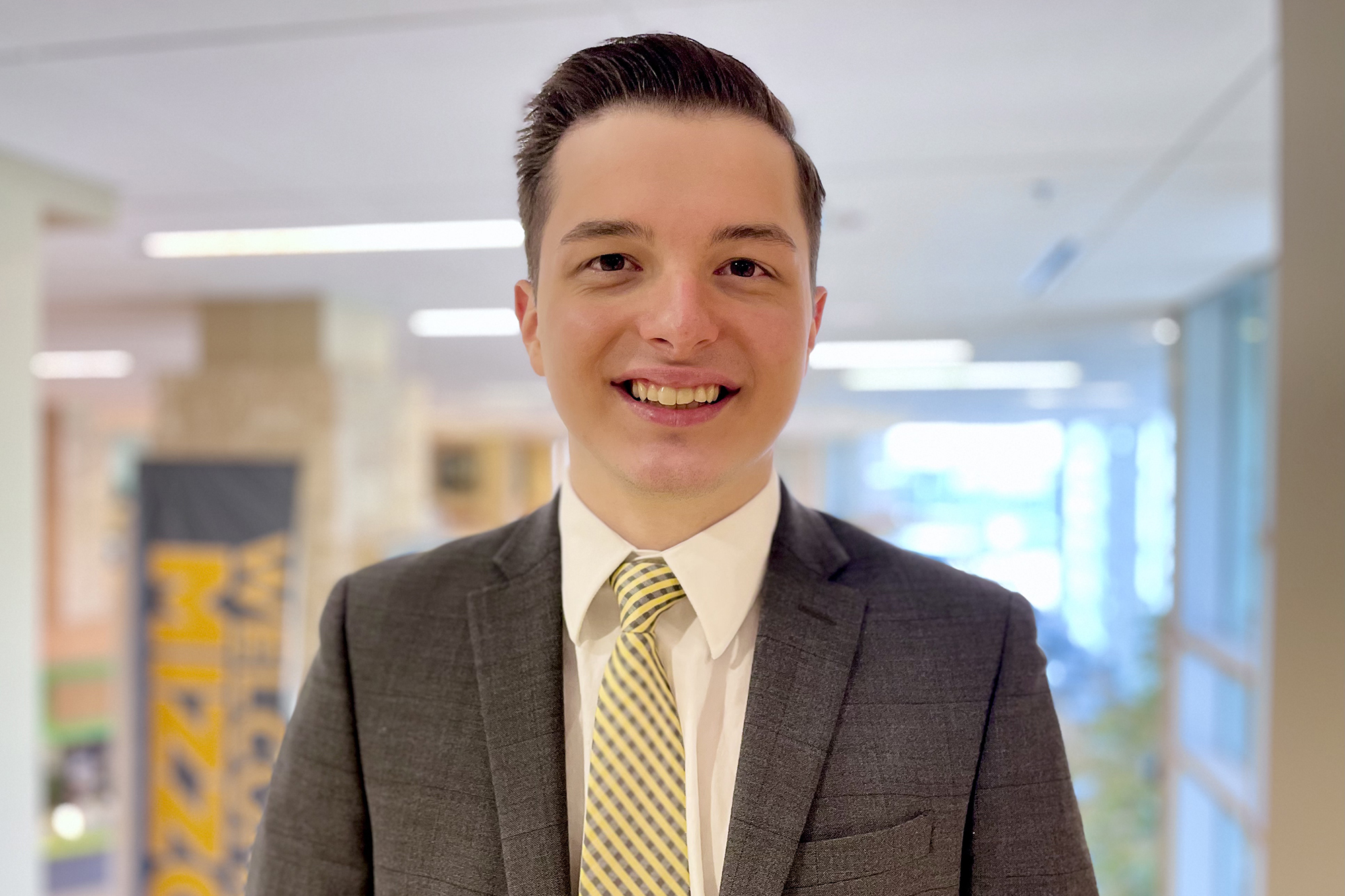 Early in his college career, University of Missouri senior Adam Slayton was encouraged to take chances. He took that advice to heart and spent his time at MU soaking up opportunities to gain real-world learning experiences. Those experiences, many of which came through internships, opened the door for Slayton to land — and start — a full-time job, all before he even completed his final semester as a Tiger.

Slayton, a Memphis, Missouri, native, is one of 175 College of Agriculture, Food and Natural Resources (CAFNR) students earning their degree this weekend. He currently lives in Kansas City, Kansas, and has worked with the State Financial Officers Foundation since August. Slayton said he wasn’t planning on taking a job while he was still enrolled at MU, but when he saw the opening, he had to take a chance. He completed his final semester via online courses.

“It’s crazy to think about where I started and where I am now,” Slayton said. “I was willing to take the chances presented to me, and I’m so glad that I did. I learned that it’s incredibly important to not be closed-minded and to see what’s out there.”

Making the most of opportunities

Before arriving at Mizzou in 2019, Slayton considered pursuing a political science degree. Multiple positive experiences as a Scotland County High School FFA member, as well growing up in a family of farmers, made Slayton switch gears when he officially arrived on campus. He picked the agriculture degree program, which allows students to build their own degree, as they choose three emphasis areas within CAFNR to study. Slayton selected agribusiness management, agricultural systems technology and agricultural education.

“I really like the liberty you have with the degree,” Slayton said. “I have been able to explore my interest areas and chose some really interesting courses that I would have never known about had I not picked this program.”

Slayton received both his state and American FFA degrees and participated in multiple state FFA conventions, which are held at MU.

Slayton’s emphasis areas within the agriculture degree allowed him to learn more about business and leadership and also strengthened his communication skills. Slayton also used three separate internships to explore his interests further. The first took place the summer after his first year at MU with Prairieland FS, Inc. There, he served as a crop scout — inspecting fields to see if any weeds, insects or disease were present. Slayton followed that learning experience a few months later with an internship in Jefferson City working with the Missouri State Treasurer’s Office.

“While these opportunities were very different, they taught me a lot about two industries I have a big interest in,” Slayton said. “I have CAFNR, and Mizzou, to thank for setting me up for all of these opportunities, too. Without the guidance I received, I wouldn’t have been able to secure these chances to expand my knowledge with hands-on learning.”

This summer, Slayton combined his two interest areas — agriculture and political science — through the MU Extension Integrated STEM Internship Program. That program allowed him to work with the Food and Agricultural Policy Research Institute (FAPRI), a CAFNR Program of Distinction. Slayton’s main focus was collecting crop share information throughout the state.

“Each of my internships really set me up so well for the future,” Slayton said. “A big reason why I was able to snag a full-time job as an undergraduate student was due to the experiences I received during these opportunities.”

In his role as executive assistant to the chief executive officer with the State Financial Officers Foundation, Slayton assists with the organization’s goal of educating individuals on responsible financial management and driving fiscally sound public policy. Slayton said the agriculture degree — and his internships — prepared him well for this type of role. He developed strong communications skills through his agribusiness management and agricultural education courses, vital for a part of his job that includes writing letters to key stakeholders. He learned more about public policy through his internships with the Missouri State Treasurer’s Office and MU Extension.

“The University of Missouri is Missouri’s flagship university,” Slayton said. “I knew when I made the decision to attend that I would have numerous networking opportunities and a chance to build multiple meaningful relationships. I’m already using what I learned at MU in my current job, and I’m excited to continue building on my past experiences as I grow in my career.”