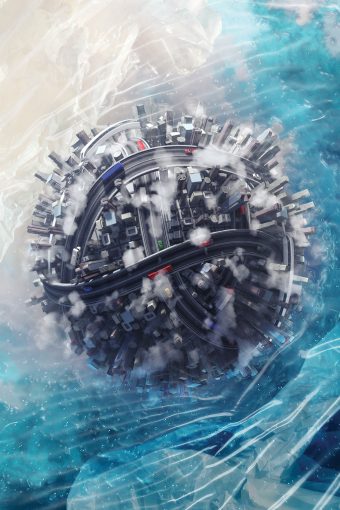 It’s easy to take asphalt pavement for granted. Perhaps that’s because it’s almost everywhere: Of the more than 3 million miles of paved roads in the United States — a little more than 12 trips to the moon and back — about 94% are paved with blacktop. It covers more than three-quarters of interstates; the rest are surfaced with concrete. Despite its omnipresence, though, asphalt pavement remains nearly invisible, disappearing neatly into the noisy background of daily life until it cracks, crumbles or must be replaced, at which times it becomes a commuter’s bane.

Not all pavement is created equal, and the right recipe can mean the difference between a roadway that can weather the weather for decades and one that starts cracking after a few months. Bill Buttlar, who joined the University of Missouri in 2016, knows this better than probably anyone else. He’s a civil and environmental engineer who has been fine-tuning pavement recipes for decades. He approaches roadways like a molecular gastronomist approaches food, searching for just the right ingredients, combined in just the right way.

His research focuses on sustainable asphalt — materials that are stable, economical and easy to come by — and he helms the International Journal of Road Materials and Pavement Designs. Over the decades, he’s explored how adding different recycled materials to asphalt can change the pavement. He started by adding old asphalt roads into new asphalt. “Old asphalt is quite a bit stiffer; it’s been out there baking in the sun,” he says. “It wasn’t easy. It was economically advantageous, but we had to work to balance out the recipe.”

Since then, he’s experimented with adding other recycled materials ranging from roofing shingles to rubber tires to, perhaps surprisingly, swine manure. (Spoiler alert: Shingles and tires are promising. Swine manure, not so much.)

Most recently, though, Buttlar has been testing what happens to asphalt when he adds recycled plastics from single-use packaging to the mix. “I’ve always had an interest in recycling and sustainable infrastructure,” he says. The benefits could be both economic and environmental, especially considering that the U.S. annually generates 42 million metric tons of plastic waste, which can require hundreds of years to decompose. Studies suggest that including plastic can add years to the life of pavement and reduce the yearly risk of potholes and ruts. Buttlar’s studies suggest that a 50% increase in the life of a resurfacing layer is quite possible when compared to non-polymer-modified pavement. Plastic also would help reduce the amount of the most expensive ingredient in conventional pavement recipes, which is the asphalt binder. The idea is catching on around the world: India already has more than 60,000 miles of plastic-enhanced pavement.

Real-world testing in Missouri began in earnest last August, with the help of the Missouri Department of Transportation (MoDOT), on a 4-mile stretch of Stadium Boulevard in Columbia. “They were interested in a real-world test project since our lab work was going extremely well, and they wanted to be one of the first DOTs to be involved,” Buttlar says.

“The great thing about this research project is that they’re moving the theory in the design of the mix to the actual roadway, where the mixture is exposed to weather and traffic,” says David Ahlvers, a state design engineer with MoDOT.

If this test road can withstand the extremes of mid-Missouri weather, then it just may be the harbinger of roadways to come — not just in Columbia but likely across the state and beyond. 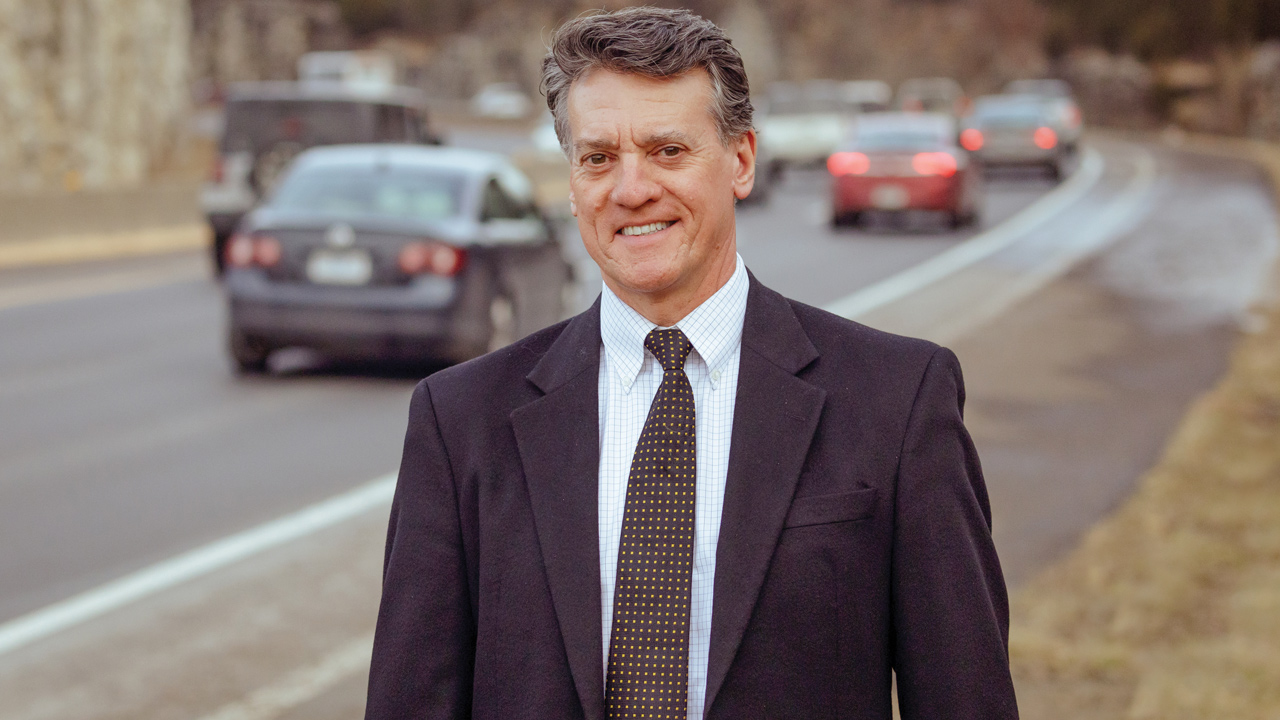 Asphalt expert Bill Buttlar stands at a stretch of Stadium Boulevard near campus where he is testing the real-world performance of asphalt modified with recycled plastic. Photo by Nathan Parker.

The project began a few years ago when Jim Fitterling stopped by Buttlar’s lab in Columbia. The two shared a number of interests: Fitterling studied mechanical engineering at MU and joined Dow directly after graduation, in 1983. He became chief executive officer of the company in 2018 and was elected chairman in 2020. “After a nice exchange, we agreed to start on a collaboration,” Buttlar says.

Dow was looking for ways to support innovative new technologies that would augment plastic recycling efforts around the world, and “Bill is the expert in asphalt paving,” Fitterling says. After the meeting, Dow offered funding for the lab experiments needed to get the plastic asphalt project off the ground. (Or, perhaps more appropriately, on the ground.) Fitterling says that the company also brought its expertise in scaling up new technologies from the bench to the market. 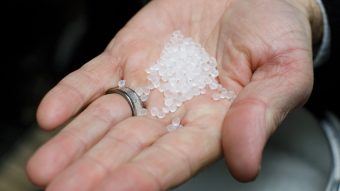 With only two main ingredients, asphalt pavement is simple. First is the rocky aggregate — combinations of sand, stone or gravel that make up about 95% of the material. Aggregate is the skeleton of the road; it supplies stability. It also varies by application: A heavy-use interstate requires a different, sturdier mix than a lightly trafficked county backroad.

The aggregate is held together by a material called a binder — which is the more finicky ingredient. The usual binder is asphalt, the thick, gooey, aromatic, tarlike liquid left behind after petroleum is refined to make gasoline. It also occurs naturally, and ancient tablets discovered in the Middle East suggest that the use of asphalt dates at least to the time of King Nebuchadnezzar, about 2,800 years ago. In the United States, the first road paved with asphalt was in Newark, New Jersey, in 1870. Edmund DeSmedt, a Belgian chemist who led that project, later paved Pennsylvania Avenue in Washington, D.C.

“The asphalt that comes from good old Mother Nature after refining crude petroleum can’t quite hold up to the high summer temperatures and low winter temperatures of the Midwest,” Buttlar says. Cold pavement cracks. Hot pavement becomes squishy and develops ruts. “So either we add a chemical treatment to strengthen it,” says Buttlar, “or we add polymers. These can be either straight from the factory or, more preferably, from recycled plastics.” 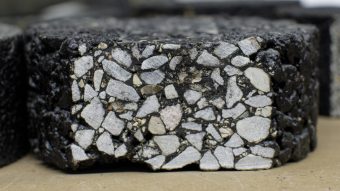 The polymers in plastic help the asphalt bind better. “In effect, you’re creating a high-performance asphalt purely with recycled materials.”

With Dow’s support and funding, Buttlar’s lab established a process for adding the waste plastic. He says it took his group about six months to settle on a design that would meet road pavement standards — namely, that it wouldn’t crack or rut under the extremes of temperature and that it would roll out with consistent density beneath the compactors. Buttlar says the plastic-enhanced material, which also contained a Dow polymer that helped compatibilize the recycled plastic, passed the tests with flying colors and was ready for the real world by the spring of 2021. Rain delays pushed back the start date, but by August they were ready to introduce Columbia’s Stadium Boulevard to its new skin.

The road to the future

The test road — an experiment in progress — is accessible to anyone with a vehicle. Start at the corner of College and Stadium, on the edge of campus, and head east. The pavement in that first section includes recycled rubber tires, finely ground before mixing with the other ingredients in asphalt. That idea, Buttlar says, is even further along than the plastic waste pavement. “We finished our research and continued demonstrations” years ago, he says, and “the economics and supply chain are finally catching up. Its usage is kind of exploding right now.” 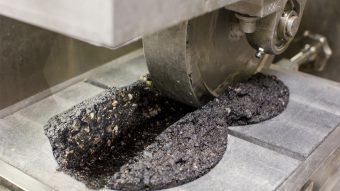 Buttlar’s equipment tests the durability of this asphalt mix. Photo by Nathan Parker.

Beyond that section, heading uphill past the rock cut, is a section paved with the first of three experimental mixtures that include recycled plastic. Turn around at Route 63 and head back toward campus to drive over the other two. The first is paved with a different mix of plastic and asphalt. In those test sections, plastic accounted for between 5% and 10% of the weight of the asphalt binder, and Buttlar estimates that the project diverted about 2.7 million plastic bags from landfills.

“We think the hybrid approach could be used for interstates because of its combined durability and sustainability benefits,” he says. “Making these mixes with a little bit of new polymer and a heavy dose of recycled polymer would be a big win for the environment.”

Buttlar has been vigilantly surveying the experimental stretches of Stadium Boulevard for cracks and ruts. Ahlvers says MoDOT will check every year or so. It will want to know, for example, how it fared in the winter. “That’s when it gets the salt and the snowplow blades,” he says.

The next few years could see rapid progress in the technology. Buttlar anticipates that by the end of 2022, the state will have established new specifications for including ground rubber — and then, by a year or two later, for including recycled plastic. “The general public will see the benefit pretty soon if things keep going well.”

He’s also planning a demonstration on an interstate in southeastern Missouri, which is important because superhighways weren’t designed to last forever. “We have this habit of keeping pavements on life support well beyond their original design lives,” he says. Highways that were originally paved with concrete, for example, may have developed cracks over time — and those cracks usually travel upward through any resurfacing layers used to extend life. Efficient paving material may slow down cracks in resurfacing layers, extending their lives and keeping the roads in a smoother condition until they can be rebuilt.

“I love conducting research on pavements that allows us to be flexible and adaptive as we look to the future,” Buttlar says. “We have to prepare for connected and autonomous vehicles, truck platoons, vehicle charging, and all the things that are going to happen as transportation transforms. We have to build and adapt roads for the cars of the future.”