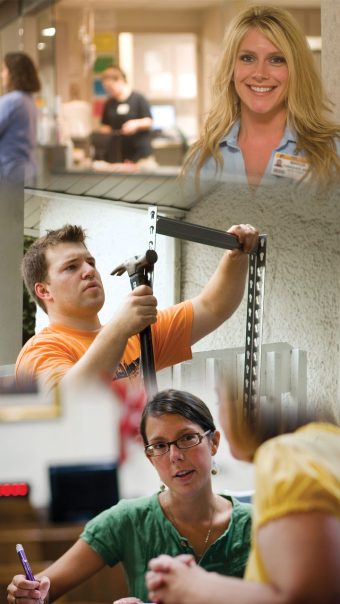 In the early 1980s, Missouri farmers were in crisis. Small farms, many that had been in the same family for generations, were failing at an alarming clip. Even more concerning was the frequency with which these financial struggles were ending in violence from desperate farmers lashing out against judges, lawyers and foreclosing financial institutions; against each other; and even against themselves. The suicide rate among farmers was skyrocketing.

Agriculture Extension managers and state human service officials were frantically trying to find someone, anyone, who could help them offer mental health help and financial services to rural families. They found their answer in what at the time seemed like an unlikely place — the University of Missouri School of Social Work (SSW).

This was before the term “mental health” was common, much less synonymous with caseworkers who were then thought to deal mostly with children, the elderly and the poor. But MU had long been sending social workers to far-flung areas of the state. Beyond that, the school was ready to support agents in the field and set up a hotline offering support and resources to these colleagues on the frontlines. “We called it crisis intervention, but it was mental health,” says Joanne Mermelstein, MS ’61, former professor and SSW director from 1988 to 1989. “We were way ahead of the game in trying to offer social work education in rural areas where our graduates would be practicing.”

Few professions have evolved as much over the past century as social work — in fact, at the turn of the 20th century, many people argued that the job lacked the specialized skills and knowledge base to even be considered a profession. But by 1919, as overcrowding in cities accelerated the need for social services, 17 schools of social work in North America had been accredited. One of those founding schools was Mizzou.

Although the influx of immigrants and the Great Migration within the U.S. during the first decades of the 1900s drew attention to the needs of urban America, MU’s social work faculty never lost sight of the university’s land-grant mission. As early as 1929, Mizzou built a curriculum for rural public welfare workers who would be desperately needed in the state’s small farming communities during the ensuing Depression and beyond.

This grassroots focus grew largely from the fact that, throughout the middle part of the century, MU’s social work faculty comprised almost solely professionals with vast casework experience in the field. By the 1950s, the newly dubbed School of Social Work (renamed from the Department of Social Work in 1953) included teachers who had worked in child welfare, health care, eldercare, criminal justice and corrections, public welfare, and advocacy and public policy. This included luminary instructors such as Clara Louise Myers (child welfare), Marilyn Maddux (health care), Bettyann Dubansky (eldercare), Clotilde Moller and Virginia Southwood, MS ’59, who lived in California during the Great Depression and worked as a social-welfare advocate in South Africa before earning a degree at Mizzou and joining the faculty. “It was all about real-world experience,” says Mermelstein, who studied under Southwood. “The master’s program had two internships, and you met practicing social workers throughout your education as well as being taught by them. You could learn a lot.”

In 1967, two years after the SSW joined the new School of Social and Community Services, it started providing statewide outreach programs through University Extension. By the 1970s, Associate Professor Paul Sundet, MSW ’68, saw the growing need to extend the social work program even farther into the parts of Missouri that didn’t have local access to master’s-level courses. He worked with Professor Michael J. Kelly to set up such programs in St. Joseph, Springfield, Cape Girardeau and Hannibal.

This new reach provided much of the infrastructure and networking that became so vital during the farming crisis of the 1980s. But while the school was expanding geographically, it was also expanding in scope. In addition to traditional casework, Mizzou faculty saw value in teaching administration, planning and management to provide upward and outward mobility. “A social work degree from MU is nimble,” says Marjorie Sable, professor emerita and SSW director from 2007 to 2016. “We teach students skills that they can apply to various practice areas, from child welfare to gerontology, and in a wide range of settings. Graduates could start out as clinical social workers, then work as agency administrators or go into academia or even politics. There’s a lot of flexibility.”

Speaking of politics, SSW also encourages students and faculty to get involved in policy, advocating for social workers and clients on everything from criminal justice reform to Medicaid expansion. And in 1989, SSW faculty were instrumental in persuading Missouri’s legislature to require that social workers be licensed — the 45th state in the U.S. to do so. 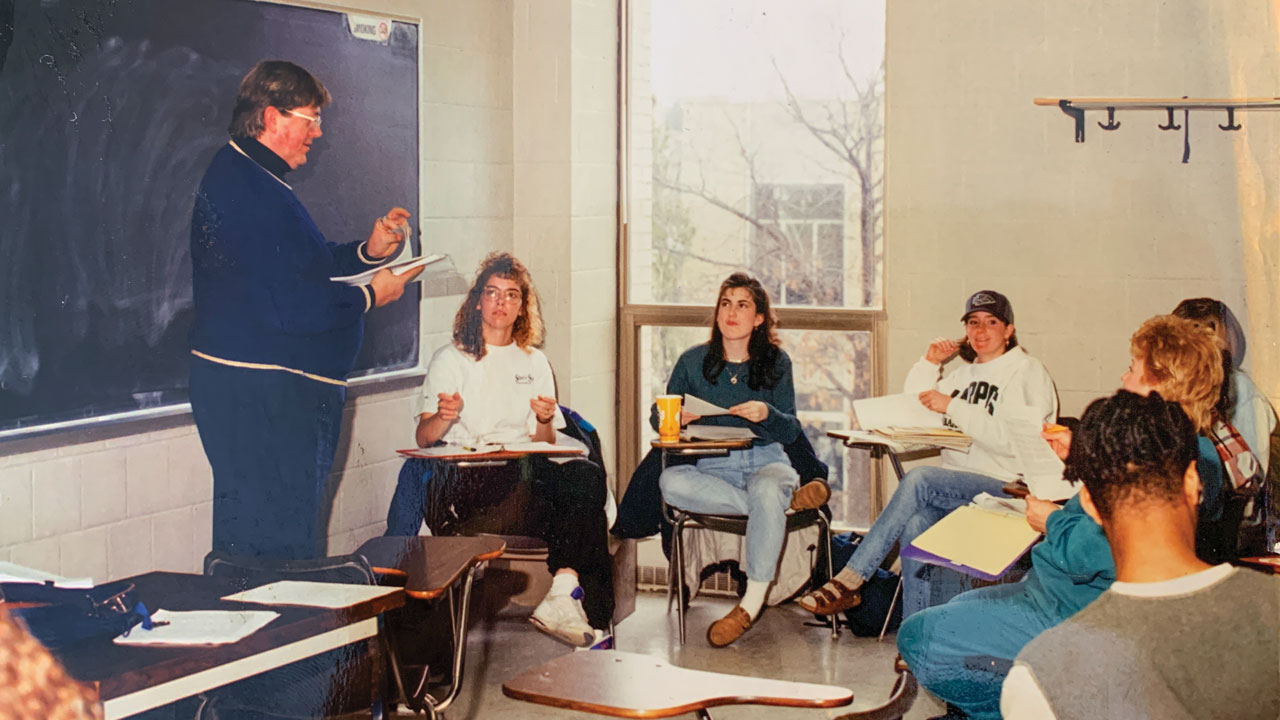 Wilson Watt teaches an internship class in the 1990s. He is now an associate professor emeritus.

Missouri may have been woefully behind in licensing its social workers, but SSW was ahead of the curve nationwide in using technology to reach remote practitioners in need of continuing education to obtain those licenses. They also used tech to provide master’s degrees, which were fast becoming necessary to receive government funding for social programs to help rural Missourians. It began in the late 1980s with interactive TV, through which instructors could broadcast lessons from Columbia to MU’s regional outreach hubs. Then, as soon as the technology was available in the mid-1990s, Associate Director Carol Snively began to push for growth of the school’s online curriculum, enabling rural social workers to study at their own pace — in their own place. “In some rural areas, there’s not a lot to attract people to move there,” says Andrea Aderton, MSW ’09, assistant clinical professor and field education coordinator. “This gave us an opportunity to work with the agencies already in the community.”

As of fall 2021, 62% of the school’s undergraduate and 78% of its master’s students were enrolled online. Ensuring its reach throughout Missouri is increasingly important as demand for social workers continues to expand. “I was contacted recently by a library that wanted to build a practicum; law enforcement is incorporating social work. … I think it will continue to grow,” Aderton says. “So, I think the program will continue to be of value to expand knowledge and help develop skills. There’s such a need.”

Social Work at Mizzou: A timeline

Following an era of unparalleled social change in the late 1800s, MU began offering social work training in affiliation with the St. Louis School of Philanthropy (later named the Missouri School of Social Economy), and the university was one of 17 that helped develop the first uniform standards for training and professional education in the field. Over the next century, the profession evolved in response to the needs of vulnerable individuals and populations. Today, social work at MU focuses on developing leaders for social and economic justice.

1919 MU is one of 17 schools accredited by the Association of Training Schools for Professional Social Work (now the Council on Social Work Education).

1925 The College of Arts and Science introduces curricula in social work through the Department of Sociology.

1929 The College of Agriculture establishes a curriculum for training rural public welfare workers.

1935 All social work training transfers to the Graduate School. A one-year graduate curriculum leads to a master’s degree in sociology with a major in social work.

1949 A two-year program leading to a Master of Science in social work is added with an emphasis on training corrections workers.

1953 The department becomes the School of Social Work within the College of Arts and Science.

1996 The school celebrates its 75th anniversary.

2000 The school launches a new doctoral program with an emphasis on state social policy. Student minority representation in the on-campus master’s program increases to 16%.

2004 The school enrolls 364 students across all of its programs.

2020 Social work faculty petition to move to the School of Health Professions. The provost approves this move in October.

2022 The School of Social Work celebrates more than 100 years of social work education at Mizzou. Enrollment is 371, including 119 undergraduates, 234 master’s students and 18 doctoral students.