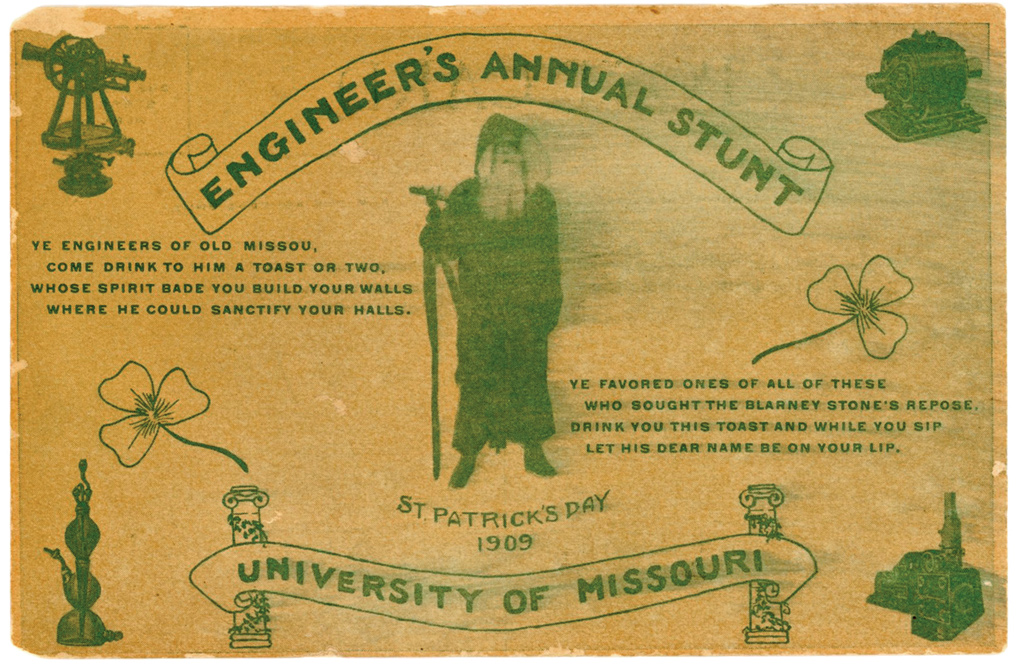 One day during mid-March of 1903, university President Richard Henry Jesse heard a ruckus outside the administration building. He emerged to find a group of engineering seniors gathering when they should have been in class. Jesse learned that the reason was to celebrate their latest discovery: St. Patrick, as it turns out, had been an engineer.

Legend has it that during excavation of the Engineering Annex Building, students unearthed a so-called “Blarney Stone” inscribed with an ancient message that translated very loosely to “St. Patrick was an engineer.” Further, the students took the famous tale of St. Patrick driving the snakes out of Ireland as proof of his engineering know-how.

Considering the silliness, Jesse ordered the students to disperse. They responded by congregating again the following year. “They decided that all engineers should celebrate; both juniors and seniors in all departments cut class,” says Steven Borgelt, associate professor emeritus in biomedical, biological and chemical engineering. “The administration and faculty were very upset.”

Nevertheless, the tradition continued. The first St. Patrick’s Day parade was in 1905, followed by enduring rituals like the Great Kowtow, kissing the Blarney Stone, the “Missouri Engineers Song” and the “appearance” of the patron saint to knight the seniors. Along the way, the event grew from a day to a weekend to an entire week, and it spread to engineering schools across the globe. Today, Mizzou has added a couple new traditions. These include a Green Tea ceremony and lighting the dome of Jesse Hall — named for the man who tried to quash the holiday before it began — a bright St. Patty’s green.