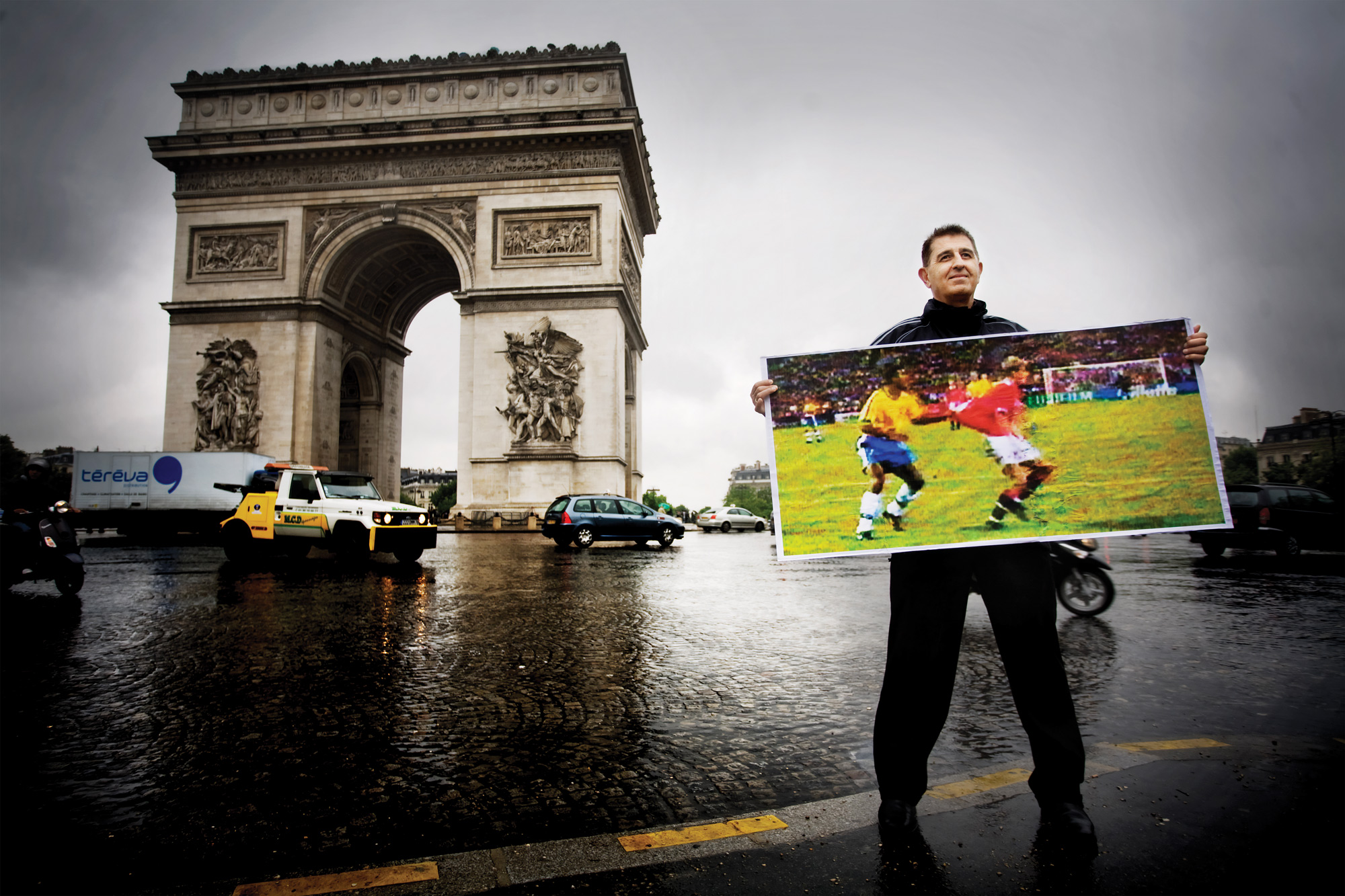 On June 23, 1998, in the Stade Vélodrome in Marseille, France, Esse Baharmast, BS ChE ’77, 2022 inductee to the National Soccer Hall of Fame, made a call that would define his career, the perception of his fellow American soccer referees and, perhaps, the future of human sports officials.

It was the 89th minute of a World Cup match between Brazil and Norway, knotted 1–1. A Norwegian player sent a cross kick into the penalty area in front of his goal where the ball’s intended target, Norway striker Tore André Flo, got tangled up with Brazilian Júnior Baiano and fell to the ground. From his position, Baharmast saw Baiano pull Flo down by his jersey.

Before Baharmast signaled for the foul, he paused to consider the weight of the moment. He realized that if Norway won, the team would move on to the round of 16. He understood that Morocco, another country in Group A, would then be eliminated. Baharmast also recognized that, in 1998 France, he was one of the few officials from the United States, a country that was largely perceived as not knowing or caring enough about the sport to even call it by its proper name of football. But he knew what he saw. He blew the whistle, called for the penalty kick, which found the back of the net, and Norway prevailed. The game was over.

Immediately following the match, his supervisor approached him to confirm the pivotal call. Not only had few, if any, of the 55,000 spectators in the stands seen the shirt-pull, but none of the 16 television cameras relaying the action to reporters, officials and millions of people around the world caught the foul, either. Baharmast thought that surely one photographer saw what he had seen, and it would make it into one of the newspapers the next day.

Instead, he awoke to headlines in French, English and other languages translating to things like: “Incompetent Referee,” “Imaginary Penalty” and “Send the U.S. Referees Home.” “I was accused of scandal, of cheating, of an American conspiracy against an African nation,” Baharmast says. “It was 36 hours from hell.”

The flames only abated a day-and-a-half later, when a Swedish television station published a photo and video that clearly showed Flo’s red jersey stretched back by Baiano’s hand. “I instantly went from blind and incompetent to one of the best referees in the world with laser vision,” he says. “I went from goat to G.O.A.T.”

Baharmast credits his being in that position — both in the perfect vantage on the field and in the stadium as a FIFA referee in the first place — to his time at Mizzou. He arrived in Columbia in 1973 to study chemical engineering, but the Iranian immigrant quickly found that soccer was the international language he could speak with fellow students from all over the world. He was a standout center forward and striker who led the Tiger club team in scoring. When he graduated, he stayed at MU as a teaching assistant while driving back and forth to St. Louis to coach and play semiprofessional soccer. It was at one of these games that he broke his leg, effectively ending his playing career. One of his colleagues at Mizzou, engineering Professor Richard Warder, was refereeing that fateful game and suggested that Baharmast buy a whistle. “He said, ‘You know the game, you played, you coached. Why don’t you referee?’” says Baharmast.

He started picking up games in St. Louis and Kansas City, where he soon caught the attention of the fledgling Major Indoor Soccer League (MISL). “He took that player mentality and made it part of refereeing,” says Brian Hall, a fellow referee in MISL and now director of CONCACAF referees. “He was always reading the game, making sure he was where he needed to be to make the right call.”

After working full time for MISL across several seasons, he was eventually named an official FIFA referee. In 1996 alone, Baharmast officiated Major League Soccer’s inaugural match, the first MLS Cup and the Atlanta Olympics. The following year, FIFA tapped him to work a heated World Cup qualifier between rivals Japan and Korea. His performance in that pivotal game earned him a ticket to France in 1998.

When Baharmast’s call in the Norway–Brazil match was confirmed for all to see, it wasn’t just a vindication of him and his ability but of all U.S. soccer officials. “When they announce the refs, they have their country next to your name,” Hall says. “Baharmast was representing the other 120,000-plus referees in the U.S. When they found out he got this call right, he took the world’s view of our refereeing to the next level.”

Baharmast’s reward back home was to be named head of U.S. Soccer’s referee department and, eventually, a FIFA instructor. He is now head of refereeing for the Colorado Soccer Association, but he frequently speaks with young referees from all over the world and tries to help bolster their knowledge and confidence against perhaps the biggest challenge facing referees today: technology.

“Referees are under the microscope now because of video,” says Joe Machnik, National Soccer Hall of Famer who inducted Baharmast in January. “Young officials are always being questioned and hassled. It takes courage, willpower and mental toughness to stay in the game. Esse has that passion that inspires them to hang in there.”