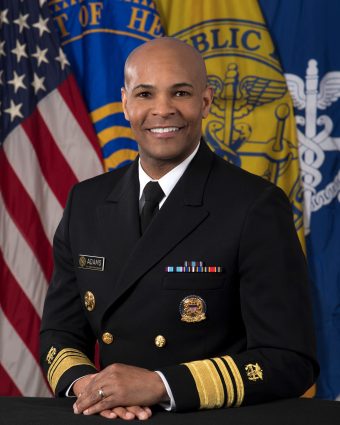 At the highest levels of national leadership, experience is often the best teacher. For Jerome Adams, his childhood and family life painted a backdrop for the decisions he made as the nation’s 20th surgeon general from 2017 to 2021.

As a child, Adams experienced a life-threatening asthma condition. He later witnessed his brother’s struggles with mental health and addiction, and helped the state of Indiana confront an HIV and hepatitis C outbreak associated with IV drug use.

This month, the University of Missouri welcomes Adams as its keynote speaker for Black History Month at 4 p.m. Monday, Feb. 28, in Memorial Union’s Stotler Lounge. This year’s Black History Month theme is “Black Health and Wellness.” Adams will discuss why health inequities are a social justice issue during a fireside chat that can be attended in person or virtually.

During his time as surgeon general, Adams led the U.S. Public Health Service during the first year of the pandemic and brought an impassioned commitment to the topics of limited health care access, substance use disorder and ensuing stigma, mental illness and the opioid epidemic.

Adams was a standout science and math student, which earned him a scholarship to the University of Maryland, Baltimore County. It was there that he met a Black physician who inspired him to pursue a career in medicine. Adams was featured in Black Men In White Coats, a documentary film about the organization of the same name founded by Mizzou alumnus Dale Okorodudu.

As surgeon general, Adams targeted the opioid crisis by striving to make the emergency overdose drug, naloxone, widely available. He also addressed health disparities such as maternal health and promoting community health and wellness through engagement with businesses and employers.

Now, continuing his mission in community and public health as a speaker, Adams is known for speaking plainly on an array of health topics, including the stigma of substance use disorder, economic factors in health care and diversity, inclusion and equity.

RSVP for a fireside chat with Jerome Adams

Event will take place in person and virtually from 4 to 5:30 p.m. Monday, Feb. 28, 2022, in Memorial Union’s Stotler Lounge. RSVP is required for both options.