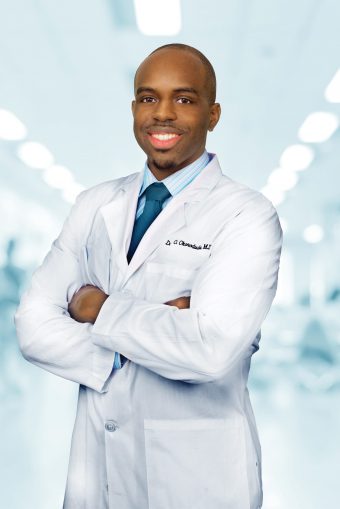 Mentorship was at the core of Dale Okorodudu’s Mizzou experience.

Now in his third year of medical school, Abdoulie Njai is living out his dream of becoming a doctor. But he still remembers the tense and uncertain stretch he spent applying to medical schools and how he’d sometimes feel stressed and burned out. When those moments arrived, he’d recharge and recommit to his mission with help from videos by an organization called Black Men in White Coats. Last year, he got to meet the physician at the heart of those motivational messages: Dale Okorodudu, BS ’06, MD ’10. “Seeing that he graduated from the same medical school where I am really inspires me,” Njai says. “It makes me want to use my platform as a Black male who’s going to be a physician to do the same thing. I want to make sure that I’m reaching back and trying to pull up other people like me.”

Okorodudu’s Black Men in White Coats outreach and Diverse Medicine nonprofit aim to do just that. They use mentorship programs, youth summits and speaking engagements to guide and support young people from underrepresented communities into medical fields where they’re desperately needed.

“To make sure no one is neglected, you need to have representation from all demographics of society in the various fields of medicine,” says Okorodudu, a pulmonary and critical care doctor at the Dallas VA Medical Center. For example, a diverse group of doctors brings patients a range of ideas, experiences and understanding. Representation is also important behind the scenes because “research will get done in areas relevant to the people doing the research,” he adds.

This is a calling for Okorodudu, observes one of his longtime mentors, David Fleming, now a senior scholar in MU’s Center for Health Ethics. “He is undaunted in his pursuit of making our profession more inclusive, for both our patients and colleagues who serve them. I think he’ll have a tremendous influence over the years.”

Okorodudu saw firsthand the lack of diversity in his field with his first-year medical school class, which included just one Hispanic and five Black students — two men, three women. Research he saw when starting his programs backed this up, with multiple reports showing medical school applications from Black men had declined over the past 40 years even as applications from other underrepresented groups had increased. Since then, Okorodudu has seen the numbers of Black men in medical schools stay steady or increase slightly. In Mizzou’s incoming medical school classes, the percentage of underrepresented minorities has increased from 6% in Okorodudu’s 2006 class to 17% in 2020.

Okorodudu, now an assistant professor of internal medicine at the University of Texas Southwestern Medical Center, tackles the problem from many directions beyond videos. He has written books for adults and children that encourage pursuits in medicine and emphasize support through mentorship. Between in-person summits and online platforms, his work has touched thousands. His latest project is a documentary to increase awareness of the lack of Black men in the field.

The energetic doctor recalls that some of his first experiences with mentoring came while an undergraduate at Mizzou. He found a lifelong mentor in Ellis Ingram, now an emeritus associate professor of pathology. That relationship led him to an “eye-opening” experience participating in the Caleb Project and Science Club, a program Ingram runs that provides mentorship from medical students to youth in Columbia. “Mentoring others allowed me to see the joy in watching others grow,” Okorodudu says. “It provided a servant leadership perspective that I never had before that.”

Ingram also played a key role in Okorodudu’s decision to stay at Mizzou for med school. He recalls Ingram taking him on a tour of the medical school while he was an undergraduate: “Toward the end of it, we were in the dean’s office, and Dr. Ingram said, ‘Hey, this is Dale Okorodudu. He’s gonna be a med student here one day.’ That just gave me hope to say, ‘Wow, somebody wants me to stay here.’ ”

Okorodudu found other mentors through an undergraduate research program — then known as EXPRESS — under the Office of Undergraduate Research Director Linda Blockus, PhD ’00. The program landed him in the research lab of Troy Zars. “They fulfilled the dream that I had of college, the good times,” Okorodudu says of Blockus and Zars. “I was getting exposure to people from the medical school through the program as well. The network you get to build is important, so that definitely helped my decision to stay at Mizzou.”

Blockus also played a role in solidifying Okorodudu’s relationship with his now-wife, Janai [née Marbury], BS ’06. Janai first noticed him when he spoke at an event Blockus organized, and they spent a lot of time together through the EXPRESS program. “He’s got the passion,” Blockus says, “that he somehow makes time to do this while being a full-time physician and a very involved father with his three kids.”