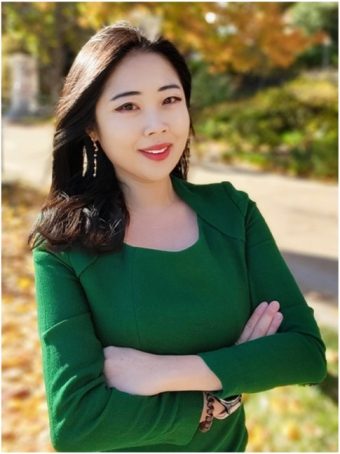 The intersection of politics and communication has always been a critical area of study in academia. But with modern international leaders addressing the weightiest of current events through an ever-growing array of media channels, today’s stakes can seem higher than ever.

Yujin Julia Jung, a doctoral candidate in political science at the University of Missouri Truman School of Government and Public Affairs, has had no shortage of research topics to choose from. An international scholar from Seoul, South Korea, Jung examines populism and comparative communication and has a strong interest in machine learning and text analysis.

She recently received the Robert N. Epsten Scholarship in International Studies from the Harry S. Truman Good Neighbor Award Foundation, a $10,000 award given to an exceptional graduate student majoring in the fields of international relations, public service, political science, diplomacy, history or the humanities. She plans to use the funds to do field research on populism in Asia.

Her current research topics include how populist rhetoric affects democratic erosion in the U.S. and Asia, how U.S. governors’ communication strategies have differed during COVID-19, and ranking nations’ conflict-management practices as it relates to level of democracy.

What brought you to MU?

There are strong ties between South Korea and the University of Missouri, and there have been numerous Mizzou alumni from South Korea dating back to just after the Korean War when former President Harry S. Truman led initiatives to open the door to U.S. educational opportunities. One of my professors in South Korea, who is an MU alumnus, was an executive for the Truman Conference — an educational and networking event for Korean Mizzou alumni — which alternates between Columbia and Seoul every year. He led me to Mizzou, and when I looked into the political science department here, I was thoroughly impressed.

What does it mean to have received the Robert N. Epsten Scholarship?

It is meaningful to me because I included a personal story about my family in my application for the award. My grandpa’s family was murdered by insurgents right after the Korean War, and only my grandpa and great-grandmother survived. These politically motivated actions are part of why I am interested in political science — in a way, it is a direct line to my family history.

It also means a lot because my adviser, Jonathan Krieckhaus, has worked with many Korean alumni, and he wrote the book on the Korean economy.

In addition, I received the 2021 Edith Taylor Therrien Award and 2020 Robin Remington Award. She was the first female political science professor here at Mizzou, so following Remington’s legacy is extra special.

How does machine learning and text analysis help your research?

Using text analysis technology, researchers can measure the degree to which politicians are populist — a political approach that strives to appeal to people who feel that their concerns are disregarded by established elite groups — based on statements and social media usage. In the past, researchers would use hand-coding to flag language usage or certain words. But now we can apply more quantitative methodology using automated analysis in a way that is more efficient.

What has your research taught you about crisis communication among politicians on social media?

One of my research topics on COVID communication highlights some of the key Twitter analytical components and their effect on citizens’ level of endorsement and diffusion of governors’ tweets. It also highlights some differences based on partisanship. While some politicians’ tweets focused more on reassurance and information guidance from the CDC, other tweets were more focused on the economy and business closures. It is also interesting to note that some politicians’ usage of Twitter increased later as the COVID-19 crisis unfolded.

How has Mizzou helped you achieve your goals?

The University of Missouri has given me so many opportunities, including those beyond campus. During an unusual time earlier in the pandemic, I attended a couple of virtual conferences about text analysis that wouldn’t have been possible without the connections of Mizzou faculty. I’ve participated in conferences at Syracuse University, the University of Michigan and Rutgers University, and I have plans to attend other programs this summer thanks to additional department funding for research and methodology.

Mizzou supports me psychologically and emotionally, too. Laron Williams, director of graduate studies in the political science department, takes the time to meet individually with every student in the program. And Professor Krieckhaus has been in constant communication with me.

What are your plans?

I definitely want to stay in academia because I love teaching, I love researching and I’m very passionate about my research topic. Receiving the Epsten Scholarship is assurance that I am moving in a direction that is the right fit for me. As the populism studies are evolving, I would like to contribute by disentangling the cause and consequences of populism. As an expert in Asia, I hope to shed light on the dynamics of populism in the region.