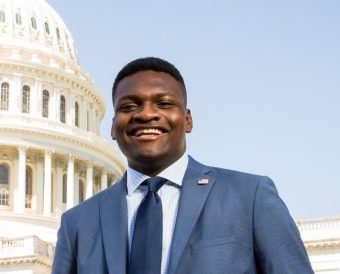 For Paul Odu, attending the University of Oxford feels like every Y2K kid’s dream: studying at Hogwarts — minus the Quidditch, of course.

Not long after the University of Missouri student arrived in United Kingdom on a year-long study abroad fellowship, an advisor recommended that he abandon the idea of being a student and consider himself “a member of an academic cult dedicated to the rigorous study of history.”

“That part struck me,” Odu said. “I thought, ‘Okay, we’re not in Missouri anymore. This is going to be tough.’”

But it’s also been great for Odu, a senior majoring in economics and constitutional democracy with a minor in history — something that Oxford has a lot of. At the University of Oxford, Odu studied British, European and global history, in particular. And as much as he enjoyed being in the United Kingdom, working alongside his “casually impressive” peers, he was eager to return to the United States and begin his next adventure as a Phi Beta Kappa Key into Public Service Scholar.

A future in public service

Odu is among 20 Phi Beta Kappa students chosen from a pool of about 900 applicants for this honor. Phi Beta Kappa is an academic honor society — the nation’s most prestigious — that champions education in the liberal arts and sciences and academic excellence. In late June, Odu participated in a conference hosted by the academic honor society where he received training and mentoring for a future working in the public sector. He has also received a scholarship.

“I’m a strong proponent of the Phi Beta Kappa mission, and to get the recognition not only of being inducted into Phi Beta Kappa in my junior year, but also now being selected as a Key into Public Service Scholar is really a high honor for me,” Odu said.

So, only days after he returned from the United Kingdom this summer, Odu jumped into another experience that will continue preparing him for a future of active citizenship. But there was something else about home he was looking forward to.

“Coming from Kansas City, I missed the barbecue quite a lot,” Odu said.

Odu grew up in Kansas City and is the first of his siblings to be born in the United States. He’s a second-generation immigrant, and his parents are from Nigeria. Before going to Oxford, Nigeria had been the only other country he’d visited, even if he was an infant at the time.

His interest in the public sector began in high school where he did debate and mock trial, learning about legal institutions, public policy and government. He started off as a political science major at Mizzou, but when he developed an interdisciplinary approach to political science, he switched to a constitutional democracy major, a newly launched program by The Kinder Institute on Constitutional Democracy.

“Once they launched that degree program, I was like, ‘Yeah, this is what I want to do,’” Odu said. “I have the opportunity to take history, economics, political science classes, and really probe the connections between all those subjects and how they relate to the development of constitutional democracy throughout American history and how we have the institutions that we do today.”

His goal is to promote equitable distribution of capital in Black and Brown communities by exploring public policy through an economic lens. He’ll do this by first, understanding why there have been legal barriers to that capital and second, developing ways to put capital in the hands of people who know how to steward it well for marginalized groups.

“Access to capital is really important to me, especially being from a community that has traditionally lacked access to capital, both social and financial,” Odu said.

Studying at Mizzou has been a great benefit to Odu’s career in the public sector. Before even stepping foot on campus as a freshman, he was chosen to be a George C. Brooks Scholar, a group of high-achieving students from underrepresented groups at Mizzou who are awarded a significant scholarship. Once at MU, he received support from the scholars and professors in The Kinder Institute who also have become Odu’s friends and mentors.

In addition to being vice president of the Mutants — MU’s men’s ultimate Frisbee team — Odu founded the Missouri Debate Union in 2020, steering the group along even during a pandemic. He also is the associate editor for the Midwestern Citizen, an undergraduate op-ed publication that covers topics in law, policy and society. The publication is based at the University of Michigan but staffed by writers from universities across the Midwest, including Mizzou.

Developing his writing skills for the Midwestern Citizen has come in handy now that he is churning out papers at Oxford. Even his involvement in the ultimate Frisbee team has been helpful overseas; he competed at the national level during his stay in the United Kingdom.

“I’m fairly confident that if I didn’t go to Mizzou, I’d be a very different person,” Odu said. “I know that the experiences that I've had at Mizzou, the people I've met, the courses I've taken, the opportunities that I've been granted, the professors and the mentors that I've engaged with — those are things that you can't really trade for anything, not even the world.”

Helping the next generation

After graduating in Fall 2022, Odu intends to go to graduate school and then pursue a law degree. He’s not necessarily interested in being a politician, but he finds law incredibly integral to economic regulation and public policy. He could see himself in several future careers, including being a regulator, managing his own private practice or working in a government role as a policy researcher.

One of the future careers he longs for most would place him right back at an institution like Mizzou: Teaching the next generation as a professor. He wants to contribute meaningfully to the lives of college students, investing in their futures just like others did for him.