“Can I borrow a laptop?”

“How do I get to the Student Success Center?”

These are just a few of the hundreds of questions University of Missouri Student Unions Ambassadors answer each day. Stationed at the information desks inside Memorial Union and the MU Student Center, these ambassadors — all current Mizzou students — are often some of the first faces visitors and campus community members see once they enter the facilities.

Unions Ambassadors have a wealth of knowledge about campus and its resources. They spend much of their day answering questions and getting visitors and students to the right place. Meet four of these Tigers and hear how their on-campus jobs have helped them find their home at Mizzou. 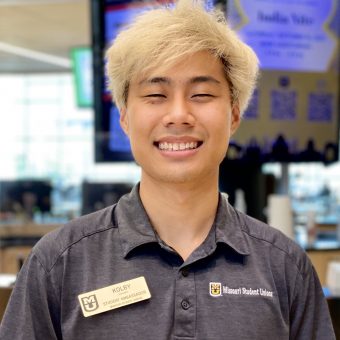 After working in restaurants his entire life, Kolby Arimoto said he wanted a job that had a more flexible schedule and allowed him to enjoy campus life. “I really wanted to get a job on campus because of how accessible it is,” he said. “I love getting to interact with people my age — plus, I can go to the Rec or study on campus right after my shift.”

Arimoto is president of Mizzou’s student-run chapter of the Asian American Journalists Association and wants to report on international issues in East Asia when he graduates.  He said working in the Unions helps expose him to new people and improve his communication skills. “I love talking to people and learning more about what they’re doing,” he said. “I get to meet a lot of students and faculty, which helps me generate story ideas and find sources. Mizzou is a great place to meet new people, and working on campus really opens that up.”

Another perk of the job: getting to do homework while you work. “When I’m not helping people, it’s like a dedicated time to get my assignments done,” he said. “What other job lets you do that?” 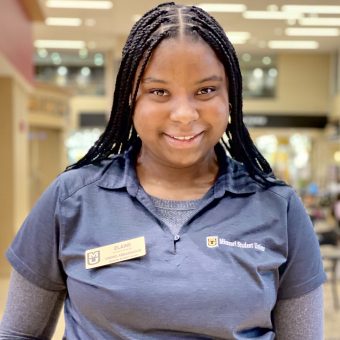 As a high school senior, Elaine Roberts got bit by the entrepreneurial bug. She and her classmates ran a program that gave new and used sports equipment to peers who were in need. Roberts said that experience drew her to the world of business, and ultimately the Trulaske College of Business at Mizzou. The scholarships she received were also a bonus.

Despite starting her college experience during a pandemic, Roberts said her work at the Unions has allowed her to connect with the campus community and meet new people. “It’s cool to say I’ve made friends through this job,” she said. “Being able to sit at the desk and see everyone do their work, and interact with them, really immerses you in the college experience.”

Roberts just completed her first year as a Unions Ambassador and is looking forward to finding more ways to get involved on campus. “My goal is to join some organizations next semester,” she said. “I didn’t even know about the Involvement Center before I started this job, so I’m definitely going to take advantage of that soon.” 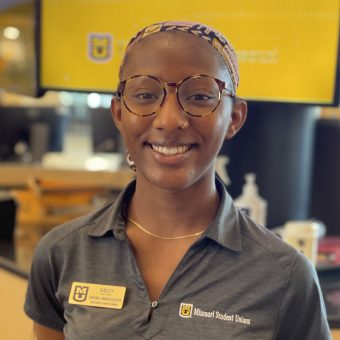 Bailey Sims chose Mizzou because it’s close to home, and she has family in the area. After arriving on campus in 2019, the film studies major sought out employment and ways to get involved on campus. “I don’t have a car so working on campus was the best choice,” she said.

Although the Unions Ambassadors typically work on their own at the information desk, Sims said the group is like a family. “As a freshman, I was a little worried about sitting alone at the desk,” she said. “But we have a lot of team-building events and activities that help bring us all together.”

In addition to her job at the Unions, Sims has also found her space at Mizzou through involvement with organizations such as the Legion of Black Collegians and the Women of Color, Honor and Ambition group and resources such as the Gaines/Oldham Black Culture Center. She said she hopes her presence as a Unions Ambassador helps current and prospective students feel represented on campus. “I want students to know that they’re not alone,” Sims said. “Mizzou has so many centers that are geared toward specific marginalized communities, and I enjoy connecting people with them.”

After she graduates, Sims hopes to continue her film studies by attending graduate school in New York City. 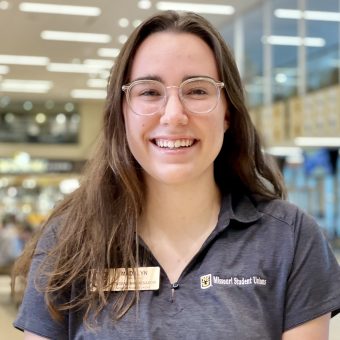 When it came to finding a job at college, working on campus was a priority for Madalyn Weber. “I really wanted an environment that was conducive to getting schoolwork done,” Weber said. The junior became a Unions Ambassador in the early part of her sophomore year — a job she said couldn’t have come soon enough. “In helping other people find places and resources, it helped me get to know Mizzou better,” she said. “I learned about a lot of things I didn’t even know existed. We’re lucky to have all of these resources on campus.”

Although the ambassadors are usually working by themselves at the information desk, Weber said she has gotten to know her co-workers through meetings and other social events. “There is an unspoken shared experience,” she said. “This job has helped me form a community at Mizzou and make the big campus feel small.”

In addition to her job, Weber is involved in a campus ministry. She also recently switched her major and is excited to see where that takes her. “It took me a while to find my place at Mizzou,” she said. “I finally feel like I’ve found my people.”

The MU Student Unions are always seeking outgoing and motivated Tigers to join the Unions Ambassador team. If you are interested in becoming a central part of campus life at Mizzou, and you can work at least 10 hours per week in addition to some weekends, apply to become a Unions Ambassador at unions.missouri.edu. You can also e-mail your resume and a cover letter directly to reidjs@missouri.edu.