When freshman Ella Earnest was applying to colleges, she knew she wanted to twirl at an SEC university. After competing in national championships and earning a spot as one of the best baton twirlers in the country, she was looking for a place to take her tosses to the next level.

Florida is a long way from Faurot Field. But when Earnest, an Orlando native and health sciences major with an emphasis in rehabilitation sciences, visited campus, she knew the University of Missouri was right for her.

“When I woke up Sunday morning in Columbia after being offered a spot, it just felt like home,” she said.

Earnest is the newest member of the Mizzou Feature Twirlers, a small but elite team within Marching Mizzou that entertains crowds with high-flying baton tosses and plenty of Tiger spirit.

Though Earnest and the rest of the team make it look easy, twirling is a craft that requires a near lifetime of practice and commitment. In order to represent the black and gold, there’s also an audition process that pits the best in the country against each other for a chance at game day glory. 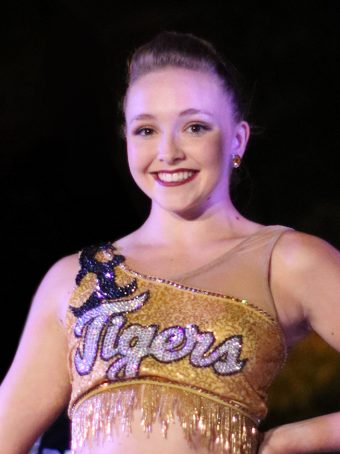 What it takes to twirl

The Golden Girls, another Mizzou halftime tradition, originally began as a twirling line in 1957. In the 1960s, the team split into two different groups — the Golden Girls became the dedicated dance line and the Feature Twirlers were created to pick up the baton. Though the size of the twirling team has changed through the decades (sometimes featuring up to three members, sometimes none) the group maintains a legacy of excellence passed down through generations of participants.

Even after graduation, some Feature Twirlers come back to help build the future of Mizzou twirling.

Cayla Timberlake is coach of the Golden Girls and a liaison between the Feature Twirlers and Marching Mizzou. Timberlake, who was herself a Feature Twirler and Golden Girl from 2008 to 2012, said the group’s small size results in strong bonds among teammates. Those connections also come in handy when choreographing a routine for thousands of fans in a week (or less). “The twirling world is kind of small,” she said. “And part of what makes it special is the constant support from fellow twirlers across the country.”

Timberlake said the team differs from other elements of the Marching Mizzou halftime show because twirlers are allowed to respond in real-time to what’s happening on the field an in any type of weather.

“They’re able to move and transition with some freedom,” she said. “If they’re close together, they can work toward more collaboration. If they’re farther apart, they can individualize what they want to showcase.”

For example, Timberlake said twirlers must keep track of field position, adapt to the time of day (it’s hard to follow a baton if the sun is in your eyes) while also moving fluidly among Marching Mizzou band members.

Timberlake said there is also one unusual thing that sets Mizzou apart in the twirling community. “No other SEC school has a working track around the field,” she said. “That creates more opportunities to twirl fire during football games."

“Twirling with fire is exhilarating and definitely a little scary, especially the first time,” said Earnest. “But there isn’t another feeling like it. An added bonus is that the crowd loves it.”

Before being selected to join the Feature Twirlers, each applicant must go through a lengthy tryout process to see if they have what it takes. Even though twirlers such as Earnest have competed at national competitions, they still need to prove to both coaches and the other Feature Twirlers that they can deliver under pressure.

The first step is submitting a tape that shows your skills. Josie Linson, a junior health sciences major with an emphasis in rehabilitation sciences and Feature Twirler, said she was instantly impressed with Earnest’s film. “We got the videos in January, and immediately watching her video — I had no clue who she was — but I remember telling Carlee [Fenton] her twirling style is really good,” Linson said. “This girl has to move on.”

In March 2021, Earnest joined some of the top twirlers from around the nation for a visit to Mizzou’s campus. Carlee Fenton, the third Feature Twirler for Mizzou, said applicants are then given a taste of life as a Tiger. “We prepare a routine that Josie and I choreograph, and we teach them a snippet of pre-game performance,” she said.

In addition to assessing the skills of applicants, the Feature Twirlers also see whose style and personality will best blend with the existing team.

“One of most important things is you want to look good together when you are twirling, — when you all leap, it needs to look perfect,” said Linson. “I saw so much of myself in Ella. And she also twirled just like us — and that was a big thing.”

Earnest said that her connection with the other Feature Twirlers was immediate. “When I met Josie and Carlee for the first time at the audition, they were incredibly welcoming to me,” she said. “It felt like I had two best friends by my side from the very beginning.”

Despite only being in her first semester on campus, Earnest is already settling into her big role on a small team.

But Earnest said that no amount of training can prepare you for the rush of gameday. “I was scared out of my mind,” she said with a laugh about her first performance at the Sept. 4 football game against Central Michigan. “Josie and Carlee kept saying, ‘You’re fine. You’re doing awesome.’”

“I told her this is the fun part,” Fenton said. “We worked so hard to get to this point. Enjoy it.”

You can see the Feature Twirlers every Tiger Football home game and at other events around Mizzou.