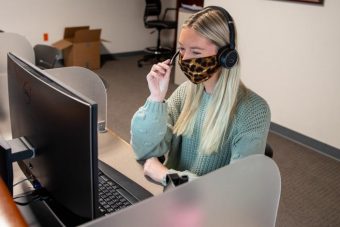 The class fit her schedule, so she signed up on a whim. What Natalie Gilliam did not realize was that the personal selling class taught by Wayne Keene, associate teaching professor of marketing, would help her find a career that fit her skillset — and later, her life.

“It was the best accident I've ever been part of,” Gilliam said.

In the spring 2019 semester, Gilliam was a junior and not exactly sure what the next step looked like after graduation.

Then fate stepped in. After watching her act out a sales role-play scenario in front of the class, Keene told Gilliam that he had a ticket with her name on it for the Twin Cities Collegiate Sales Team Competition taking place in a few weeks at the University of Minnesota-Twin Cities. The competition featured students from more than 20 universities attempting to role play sales scenarios behind closed doors for both a large and small company with judges watching in the background.

In spite of being one of the few non-seniors in the University of Missouri’s delegation, Gilliam recorded the highest individual score on the team, which finished third in most points in the competition.

Shortly thereafter, Keene found a spot for Gilliam in the burgeoning Inside Sales Lab, located on the third floor of Cornell Hall. Sitting at one of nine terminals inside the space, Gilliam started her time as a remote paid intern working for a nationally known foodservice sales agency, The CORE Group, focusing on Smucker’s and McCormick and Co.

After graduating from the College of Business in 2020, Gilliam started work as a technical recruiter for St. Louis-based Signature Consultants before accepting her current role as a business development representative for the mobile payment company Square last November.

She gives a large amount of credit for the fast ascension of her young career to the experiences she had while working in the Inside Sales Lab. Inside sales, also known as virtual sales, have become the fastest growing segment of the entire sales profession. As a more cost-effective alternative to the traditional role of the traveling “outside” sales representative, inside sales teams create and strengthen partnerships between companies and possible clients in every business-to-business sector.

The Inside Sales Lab houses 15 Mizzou students, most of whom are juniors and seniors, working for four different customer companies. Like Gilliam, the students either assist with the sales process by finding and executing leads, or may even have the opportunity to close on sales themselves — depending on the expectations of the customer companies. To date, close to 40 students have worked for 10 companies as part of the lab.

“Whenever you come out of college, and you can say, 'I've cold-called people before. I've made 100 calls a day. I can smile and dial all day long.’ People are like, ‘OK, there's more of an investment here rather than a risk,’” Gilliam said. “It's made me incredibly marketable."

Read more from the College of Business