When Denis Swope played trumpet during his final Marching Mizzou football game performance on Nov. 16, 1985, he didn’t imagine stepping on the field on game day again — let alone 30+ years later and as a band director. This Saturday, he’ll do just that. 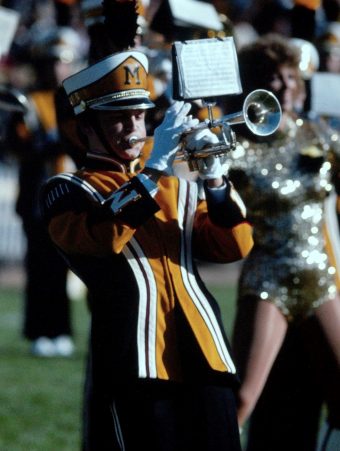 Swope, a 1989 graduate of the University of Missouri College of Education, has taught at Hickman High School for more than 20 years. During that time, he’s led numerous Hickman marching band performances at Faurot Field as part of MU’s Champion of Champions Marching Band Festival but never during a football game and never with the additional music responsibilities that come with game day.

This Saturday, while Marching Mizzou performs at Missouri Bicentennial Inaugural Parade, the Kewpies — some as young as 14 years old — will get the opportunity of a lifetime: to perform their competition show, as well play music from the stands, in front of thousands of SEC fans.

Amy M. Knopps, director of Marching Mizzou and associate director of bands at the University of Missouri School of Music, reached out to Hickman’s band directors in August to set the plan in motion. Knopps then made the 1.5-mile trek to Hickman to ask the students, reigning champions of MU’s Champion of Champions Marching Band Festival, if they’d be willing to take on Marching Mizzou’s game day duties.

“She came in and explained that Marching Mizzou needed to be in Jeff City for the bicentennial parade,” said Tom Sweeney, Hickman’s associate director of bands. “As she kept talking, the students started to realize what was happening, and you could feel the energy in the room shift. To be asked to fill in in this way is an undertaking, but we are so honored and excited to do it.”

Knopps knew the Kewpies would rise to the task at hand. “We are so proud to partner with Columbia Public Schools and Hickman High School on this historic day,” Knopps said. “Marching Mizzou has a long history of Hickman High School graduates joining our ensemble and I know this collaboration will only strengthen that bond as the students see first-hand what it is like to perform in Memorial Stadium. We thank them for taking on these tasks and know they will give everyone in attendance a great show.”

After Knopps explained the details of game day responsibilities — everything including Tiger Walk and playing the national anthem, stand music and the marching show performance — the response from the Kewpies was a resounding, “Yes!” … but the work was just getting started.

Hickman was already well into rehearsals for its competition marching show “Untamed,” but Sweeney said there was a distinct shift in focus following Knopps’ invitation. “You have to take into account that half of our students had never marched in an actual performance before this invitation, due to COVID,” Sweeney said. “The kids took those nerves and excitement and really put them to use. You can hear all of the additional practicing as you walk down the halls.”

Swope said his past experience with Marching Mizzou has given him insight into how to prepare — not only for the marching performance, but also for all of the additional musical elements and logistics of the day. “Knowing what I went through as a member of Marching Mizzou has been extremely helpful,” he said. “This is a once-in-a-lifetime opportunity for our students, and I want them to have a great experience and still be talking about it 30 years from now.”

The Hickman marching band hit the field for their first football game on Sept. 10. They’ll get one more on-field performance in before their Sept. 18 Memorial Stadium debut.

The theme of Hickman’s marching performance is the jungle — a perfect fit for Tiger fans. Swope said the show includes music from the 2016 Jungle Book movie, Imagine Dragons and Estancia. “The students will show the wonder and beauty of the jungle, along with the dangers that come with it,” Swope said. “The audience should listen for jungle sounds, including the rushing waterfall in the middle of our performance. We will close with “Warriors” by Imagine Dragons — complete with a rockin’ guitar solo.”

Although, Swope’s trumpet won’t be making its return to Faurot Field, he said the lessons he learned at MU and through Marching Mizzou have been invaluable in getting him to where he is today. “All of those experiences helped shape me as a musician and a teacher,” he said. “I have such fond memories of my time at Mizzou, and I’m honored to be able to make more of them with my students.” 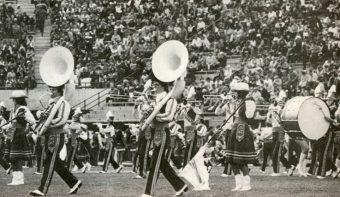 Not the first time

Although there’s no precedent for a high school band taking on the entirety of game day duties at Mizzou, Hickman has performed their marching show on game day twice before. Once in October 1970 and also in November 1980.