The students who compose the community of the online bachelor of science in business administration program at the Trulaske College of Business come from all walks of life, yet they share one commonality — to earn a degree (or two) in a seamless way that caters to their busy daily schedules.

“The online BS BA program is really designed to meet the needs of a unique student population,” said Michelle Kemp, director of undergraduate student services and online initiatives. “I love that our program provides opportunities for a variety of people who might not be able to pursue their degree otherwise.” Below are the stories of Trulaske students who are working toward their BS BA degrees, while finding the time for full-time jobs, family life and everything else that comes their way. 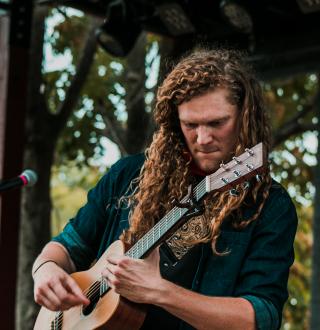 For years, Grady Frazier, a 27-year-old native of Mexico, Missouri, has been carving out a name for his music within his home state — and that was well before the COVID-19 health pandemic turned the music industry upside down.

“I’d say that my live show is similar to what Ed Sheeran does, but if Ed Sheeran grew up in the middle of the United States,” said Frazier, referencing the English-born pop music star.

Frazier, who lives in Columbia, began taking classes in the BS BA program in the summer of 2019, after finishing an associate’s degree at Moberly Area Community College (MACC), at the suggestion of a counselor at MACC. He hopes to finish his degree in December 2021.

Frazier said he saw the program at Trulaske as a way to gain the business savvy needed to become a successful recording artist, producer and business owner. “I reached the point where I didn’t know how to make this get bigger,” Frazier said. “I just needed a whole philosophical change, and an environment where people are talking about business.” 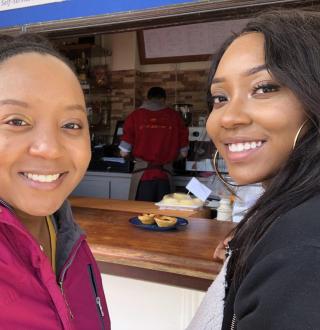 Casia Martinez always wanted to finish her degree at the University of Missouri — but she wasn’t sure how she could do so while being more than 4,200 miles away from Columbia, in Suffolk, England (about 90 minutes northeast of London).

Martinez has lived in England since July 2017 with her husband, Josh, a senior airman in the U.S. Air Force, who is currently stationed at Royal Air Force Mildenhall. She initially began at Mizzou in 2014 and attended for a year before transferring to a university that was closer to home, and to Josh. After leaving Columbia, though, she realized how much it meant to her to finish her Trulaske degree — right when the opportunity to live abroad presented itself.

Originally, Martinez and her husband were scheduled to come back to the U.S. in July 2020, but they decided to accept an offer to extend their stay to July 2022. Once they return stateside, Martinez hopes to establish a business in which she can offer digital brand-building services for clients.

Martinez encourages those who are interested in following a similar path to hers to do the same when it comes to deciding to start or finish a degree as a working professional. 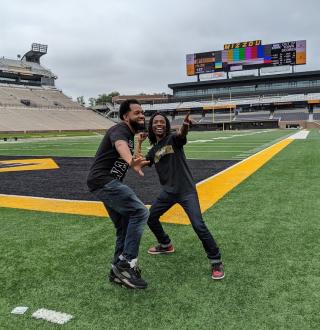 Tenelle Bufford has always been a vocal creator. As he has matured, though, his voice has changed shape and form in step with his vocational callings.

Growing up, he found his voice largely by writing and performing rap songs as part of a well-known hip hop duo called Souls of Liberty, a group he formed with Metro High School classmate, childhood friend and Mizzou alumnus Ryan Brown.

The tandem started out with a big dream, one that would allow them to open for internationally known musical acts who made their way to Columbia, such as Kendrick Lamar and Bone Thugs-N-Harmony.

Now, Bufford hopes to add his voice to the larger narrative of revitalizing the North St. Louis neighborhoods that he has always called home by investing in community-driven commercial real estate projects and business ventures. To reach his dreams, Bufford is pursuing his BS BA through the online program offered at Trulaske while maintaining a busy schedule, serving as a basketball coach at Metro High School and as a package handler for FedEx.

Bufford said he appreciates how the online program allows him to prioritize his studies when he has the free time needed to study and participate in class discussions.

Read more from the Trulaske College of Busines