Michael Stambaugh wants people to know that fire is not always bad. He knows that to some people, this is like saying water is dry, and after 20 years as a researcher at the University of Missouri, he’s still trying to show the good that can come from one of nature’s most powerful forces.

“Fire is a historical legacy,” said Stambaugh, who is currently an associate research professor in MU’s College of Agriculture, Food and Natural Resources (CAFNR). “We, as people, are linked to it for our survival.” 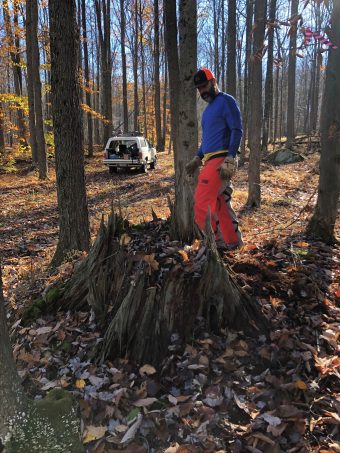 Stambaugh inspects the stump of an old white pine tree in northern Pennsylvania, where no white pine currently grows, having been cut out entirely in the 1800s. This stump has rings dating back to the 1500s.

Yet 2020 had one of the most devastating wildfire seasons in recorded history, with California seeing 4.2 million acres burned — the most since records have been kept — and more than 30 deaths. Researchers believe climate change is fueling more frequent extreme weather, including wildfires, and Stambaugh is at the forefront of the push to understand why and where this is happening and what can be done about it.

To get a better picture of what the future might have in store, Stambaugh and his research team at the Missouri Tree Ring Laboratory are looking into the past by examining tree rings, each of which documents a single year in the life of a tree that could be as much as 500 years old. Changes in the rings show evidence of severe events, such as fire or drought, allowing Stambaugh to determine how often fires occurred in the past and how severe they were. His research indicates that wildfires will continue to become more frequent and more severe as the climate continues to warm, posing a threat not only to forests and people, but also to researchers like Stambaugh who must convince a sometimes skeptical public that fires do have important natural functions.

“Old-growth forests don’t happen by accident,” Stambaugh said. “For some forests, regular low-intensity fires help reduce competition for nutrients and allow trees to grow bigger and older. And at the same time, those old trees tell us so many things about the climate of the past. As we lose old-growth forests, we’re losing irreplaceable records of the past.”

Stambaugh’s research works in concert with related efforts to restore Missouri’s native shortleaf pine forests and enhance biodiversity. For several years, Stambaugh has worked to develop a fire management program with the Mark Twain National Forest, which recently reintroduced a locally extinct songbird to Missouri with the help of other MU researchers.

But fire’s impacts on forest ecosystems are only one piece of the puzzle. Stambaugh noted that the human relationship with fire is yet another part of the story that tree rings can tell.

“In the tree-ring records, we can see changes in forest fires that correspond with different stages of human movement, from Native Americans to European immigration to today,” Stambaugh said. “As time has passed, our relationship with fire has become more antagonistic, and our forests have suffered for it. We are overdue to add a cultural or social side to forestry and wildfire research, and to incorporate indigenous knowledge about how to help drive fires safely and for our benefit.” 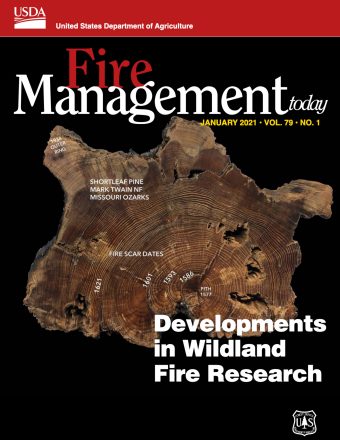 Stambaugh's research was recently highlighted on the front page of Fire Management Today, a U.S. Forest Service publication. The cross-section of shortleaf pine featured on the cover belongs to Stambaugh's lab and was taken from a tree that lived from 1577 to 1934.

Stambaugh is a proponent of prescribed (controlled) fire, which is the process of intentionally burning sections of forest to encourage renewal, restore habitats and increase biodiversity. These fires also create less smoke pollution than wildfires, due to their controlled nature and strict regulations meant to protect air quality, helping to minimize health impacts to those who live nearby.

Moreover, regular prescribed fires burn away dead wood and underbrush that wildfires feed on, reducing the risk of severe wildfires and heading off the climate change-associated risk of an increase in such fires. Native Americans are known to have practiced prescribed burning long before the arrival of Europeans in North America, and for Stambaugh, the benefits of the practice are evident.

“Last year, more than four million acres burned in California,” Stambaugh said. “That seems like a lot, but research shows that historically, 4 to 10 million acres burned every year. It’s clear that the fire itself has never been the problem. The problem lies in how we perceive fire. Is it an enemy, or is it a vital part of ecosystems and our own survival?”

Changing the prevailing perception of fire is hard work, but after years of examining tree rings and collecting a trove of data about the role of fires in ecosystems, Stambaugh has not lost his passion for his work. He attributes that strength of purpose to his mentor, Richard Guyette, who instilled in him a sense that humans are not removed from nature but are a part of it, an ethic that continues to stoke Stambaugh’s interest in how the human relationship with fire has evolved — or perhaps devolved — over time.

Guyette, who retired from MU after 33 years as a researcher in CAFNR, also showed Stambaugh the importance of looking anywhere and everywhere for old wood that might hold a record of past fires, even in the face of resistance from other scientists. From the Missouri Ozarks to Ontario, Canada, the pair of researchers were often told that they wouldn’t find what they were looking for.

“A lot of respected, published scientists would tell us wherever we went that this wasn’t that type of forest, that we wouldn’t find evidence of fires,” Stambaugh said. “What we found was that the historical forests often had many fires. After forests were cut and fires were excluded in the early 1900s, the dominant tree species changed over time, basically creating an entirely different forest type today compared to what had been before.” 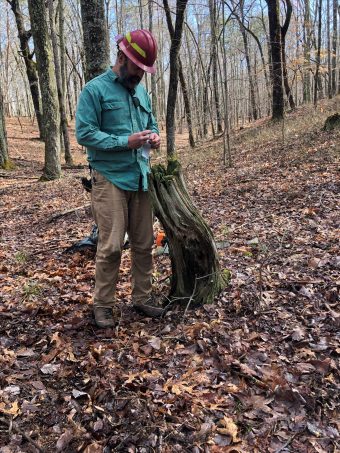 Stambaugh stands by an old shortleaf pine stump, likely cut in the 1800s. The stump has black charcoal from very old fires at its base.

Stambaugh and Guyette took to calling these expeditions “mythbuster” projects, because despite the skepticism from local researchers, they would find evidence of regular historical fires everywhere they went. More intriguing still, Stambaugh believes not all these fires occurred naturally. In places that accumulate five or 10 feet of snow per year, leaving only three months for fires to take place, he has continued to find evidence of regular fires. To Stambaugh, this suggests that people were taking advantage of narrow windows of time to intentionally help forests burn.

But for all the progress made toward understanding the natural role of forest fires, the process of mythbusting is ongoing. Some legislators and members of the public believe that prescribed fires add to the problem rather than solving it, a belief Stambaugh attributes to a century of misinformation and errant policies of fire suppression. Still, as awareness of climate change and human impacts on the environment continues to grow, Stambaugh has confidence that things are moving in the right direction.

“The data is growing, not just in North America but worldwide, to show that fires have always been an integral part of the growth and survival of healthy forests and thriving human populations,” Stambaugh said. “The tide needs to turn now to preserve and protect our forests, and I think that’s beginning to happen.” 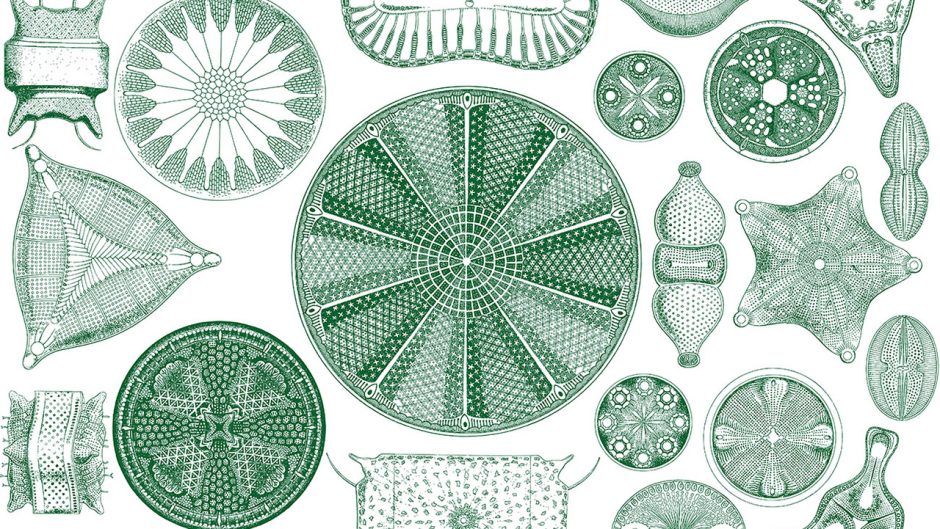 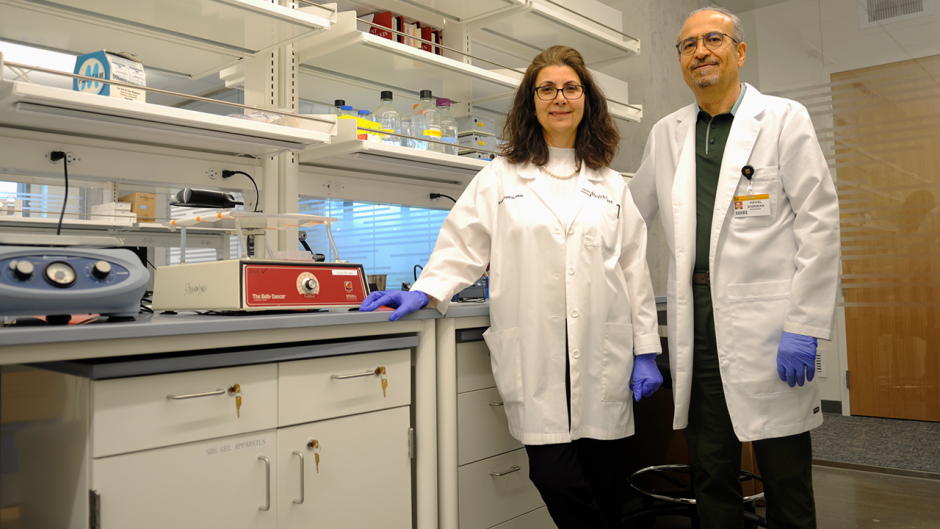