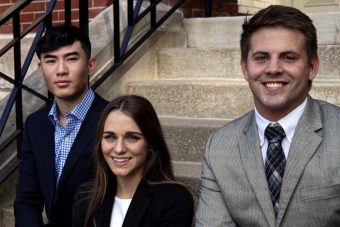 Ed Ge, Victoria Lofland and Bryce Edmondson. Note: This photo was taken before the COVID-19 pandemic.

Ed Ge always wanted to push the boundaries of what is possible. As a kid growing up in the suburbs of Detroit, he took his cues from great emperors and generals, like Alexander the Great and Julius Caesar.

In August 2020, the senior Trulaske College of Business student went part time so he could work full time on his startup, Stratodyne, which was accepted into a major accelerator program in Silicon Valley and recently received a St. Louis Arch Grant.

He’s still planning on returning to MU after he graduates from the Alchemist Accelerator in spring 2021, but right now, Ge’s focused on building the next generation of aerial monitoring vehicles.

“I never thought of myself as an entrepreneur,” Ge says. “But I’ve always known that, no matter what I did, I wanted to be the best.”

While Ge is the CEO of Stratodyne, he also brought along fellow Tigers Bryce Edmondson, a finance and economics major, and Victoria Lofland, a physics major.

Together, the team is using balloons to provide a continuous stream of real-time data for farmers who are managing crops. The pricing is up to 15 times less than competitors who are using aircrafts and satellites.

“We realized that having the high-altitude platform up there in the stratosphere — the data that it can capture and gather is much more valuable than anything it can shoot into space from that altitude,” Ge says.