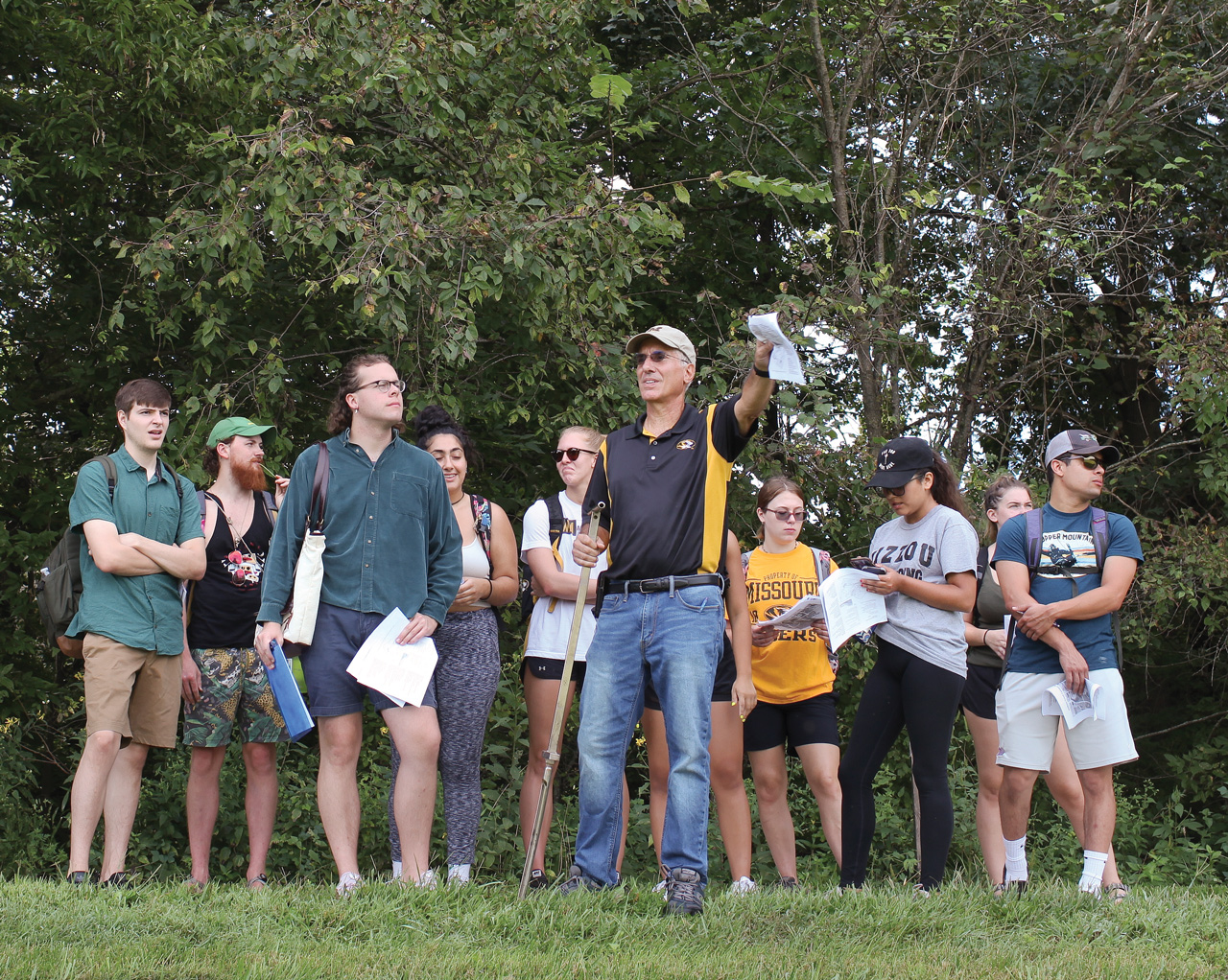 If you are Peter Motavalli, center, the world is your classroom. On the fall semester’s first walking tour, Motavalli leads his Soils and Environment class down to the Hinkson Creek flood plain behind the Hearnes Center.

Published on Show Me Mizzou Jan. 7, 2020
Story by Erik Potter

The August morning is already hot when Peter Motavalli’s Soils and Environment students gather on high ground at a tree line near the southern edge of campus. Behind them, acres of asphalt parking roll toward the Hearnes Center. Before them, a rocky, wooded hill falls about 140 feet to the flood plain of Hinkson Creek. With Motavalli in the lead slinging a soil-coring tool like a walking stick, they strike out down a narrow gravel path.

“I like to think of the whole campus as a living laboratory,” says the professor of soil fertility and plant nutrition, firm in his belief that students can only learn just so much behind a desk about how land management affects runoff, erosion and stormwater. His methods earned him a 2019 William T. Kemper Fellowship for Teaching Excellence.

Soon, Motavalli and 22 undergraduates step off the path into scrub grass and pause near power transmission lines, still high above the meandering creek. Motavalli prompts the students to begin practicing the professional skill of using maps and observations to orient themselves in the landscape’s changing soils, vegetation, slope and elevation. He asks why the spot is covered in scrub grass rather than trees. They correctly call out the power lines overhead and explain that the land has been cleared and is mowed periodically. Motavalli draws their attention to the soil under their feet known as Weller silt loam. This wind-blown loess (rhymes with fuss) deposited in thicker layers on summits during the glacial period improves the soil for agriculture. He also mentions a nearby Native American burial ground. Why, he asks, might they have lived up here? It’s a question he’ll return to.

They continue along the path, which now descends from the summit. The trail has turned rocky, and before long, everyone breaks a sweat. Along the slope, Motavalli rams the soil corer into the ground, but the stony earth makes for slow going. His students surmise correctly that, over centuries, erosion has been removing topsoil, leaving behind the underlying rocks. They walk east now. The ground levels, and Motavalli tries the probe again. This time, he removes a dark, 6-inch core of silty soil — Haymond silt loam. It’s confirmation they have reached the Hinkson Creek flood plain a flat masterpiece of nature formed by erosion and flooding.

The students consult a specialist’s map that locates, names and describes local soils. Motavalli has carefully chosen the tour’s stopping points to animate the plat, to show the various soils’ properties and their effects on pollutants that might enter the creek. But he is also after learning that comes in through the senses: seeing up close the colors and textures of silty, dark flood-plain soil; feeling it spongy underfoot; touching and smelling the particular vegetation that grows in and on it; and experiencing the burn in one’s thighs brought on by the descent from a loess-capped hilltop.

The patch of map labeled Haymond silt loam is called Hinkson Field by everyone else. It’s a grassy athletic field smack in the middle of the Hinkson Creek flood plain. And flood it does. Routinely. Motavalli gestures east to a thin screen of trees and asks students what they observe. Sitting about 25 feet above the flood plain is a row of houses with more beyond. Then he directs students’ eyes northward and skyward. Necks crane to view the summit near where their hike began. “Native Americans often camped and built their burial mounds on the blufftops overlooking rivers and streams,” he says.

Motavalli and the students finally cross the Hinkson, where questions arise about pollutants impairing the stream and how land use could affect them: Is there enough vegetation along the creek to reduce pollutants in runoff? How would the plants affect stream bank erosion? What are the ramifications of putting a subdivision here? Tradeoffs abound. But, for now, it’s early in the semester. Motavalli is hard at work kindling students’ interest in their subject and encouraging them to wrestle with its issues.

He frames the tour as “a miniature Corps of Discovery expedition where students come to see campus as a microcosm of a world facing many environmental challenges and land-use decisions.” But, unlike Lewis and Clark’s journey, students can pop right back onto the main campus to hit their next class. Plus … no wild bears.