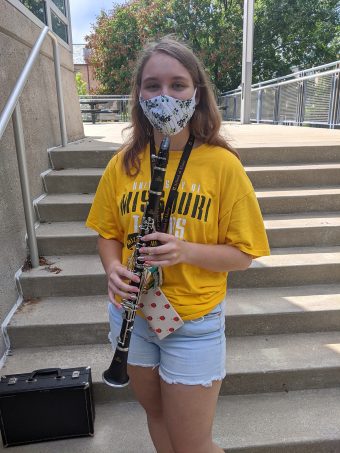 Emily Kirkham, a freshman from St. Louis, is a clarinetist for Marching Mizzou.

Kirkham, a freshman from St. Louis, is bringing her musical talent to the University of Missouri — and to home football games — as a clarinetist for Marching Mizzou.

Emily is the youngest of three, all of whom participated in Marching Mizzou. For the Kirkhams, marching is a tradition. Though for Emily, it’s also a bit of a competition.

“My brothers would agree that I’m the best musician,” Emily Kirkham said with a laugh. “They have very technical brains, but I like the creative side much more than that.” Emily said she wants to strike a balance between the two, and that’s why she’s majoring in both computer science and music.

Emily Kirkham recently moved into Hudson Hall and is beginning her first semester as a Tiger. She just completed band camp — the initial step in the Marching Mizzou journey that her brothers know well.

The first Kirkham to join Marching Mizzou was Matthew, a trumpet player who graduated in 2016 with a degree in computer science. “My dad — Donald — did a couple years of marching band back in high school,” Matthew Kirkham said. “But I was the one who took it to college and set that trend.”

Emily Kirkham acknowledged that Matthew’s time in Marching Mizzou was formative to her own musical ambitions. “I started playing about the time he started at Mizzou,” she said. “I knew then that this is something I wanted to do, and it motivated me to pick up an instrument.”

Andrew Kirkham, the middle sibling, graduated last May with a degree in computer engineering. He played alto sax and overlapped with his older brother in Marching Mizzou for one year.

Now a software engineer at Boeing, Andrew Kirkham said he’s already nostalgic about his time in Marching Mizzou. With that in mind, he advised Emily to make sure she manages her time at college and focuses on what is important. “Marching band is such a time commitment, so you want to have a balance between your social life, academic life and sleep,” he said.

Amy M. Knopps, associate director of bands and director of athletic bands, leads Marching Mizzou and knows the Kirkhams well. Knopps said that it’s not unusual to have sibling links — even twins — among those marching. She added that some students opt for a fifth year in order to share the experience with a family member.

“We love having sets of siblings dedicate themselves to Marching Mizzou,” Knopps said. “We are all a big family, and we take pride in that.” 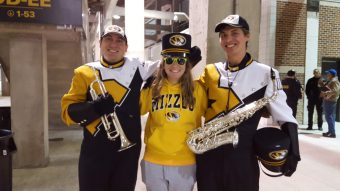 Emily Kirkham remembers family trips from St. Louis to Columbia to see her brothers march. Though she’s a little worried about the pressures of playing at Mizzou, she said she’s ready to take the next step.

"It’s scary to meet college-level players at first, but I know I’m going to get better,” Emily Kirkham said.

Despite the difference in ages — there are four years between each sibling — the Kirkham children are supportive of one another. “We’re all really close,” said Matthew Kirkham, who now lives in St. Louis near the rest of the family. “I’ll definitely do my best to get to Columbia and hang out with Emily — even if it’s not for games.”

Andrew Kirkham also said he was rooting for his sister. “I tell Emily to have as much fun as possible,” he said. “The first time on the field is scary. After that, you get used to it.”

When asked if they ever play music together, there was some disagreement. “I have tried so much!” Emily Kirkham said.

“Yeah, she keeps trying,” Andrew Kirkham said. “But I don’t want to wake up the neighbors.”