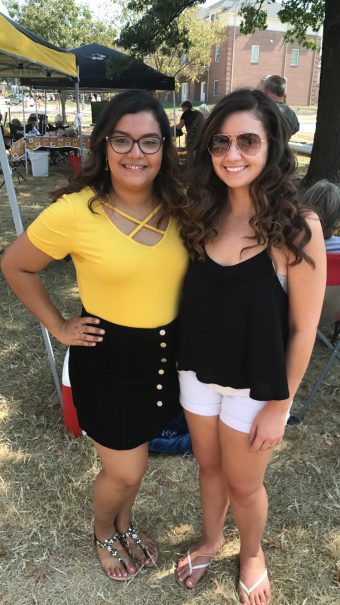 Patel's passion for Mizzou hasn't waned during her time her thanks to her campus involvement and love of all things Mizzou. Here she is enjoying a tailgate before a Tigers football game.

Avina Patel was always drawn to Mizzou. There was just something about the school that made it feel special. Patel grew up in Ste. Genevieve, a small town resting on the border between Missouri and Illinois. She refers to herself as “a very quiet person” prior to college. Mizzou presented the perfect opportunity to grow past that label.

“When I thought about the top schools in Missouri, I always thought of Mizzou,” Patel said. “It’s well known throughout the county.”

Patel’s passion for Mizzou hasn’t waned in her four years as a student. Majoring in biology and psychology, she has found reasons in and outside of the classroom to remain enamored. Patel met many of her closest friends through her involvement on campus in groups such as Mizzou Alternative Breaks, as student-led volunteer program that sends groups of students around the world to serve different communities.

“I have friends in many different organizations, which allows all the aspects of my life to interact,” Patel said. “If it weren’t for my involvement on campus I wouldn’t be the person I am today.”

As a student ambassador, Patel cares about seeing other students get involved as well.

“I truly believe that being involved in college really makes or breaks one’s experience on campus,” Patel said. “Walking through this huge campus and having people I know wave or say hi to me truly makes it feel like home.”