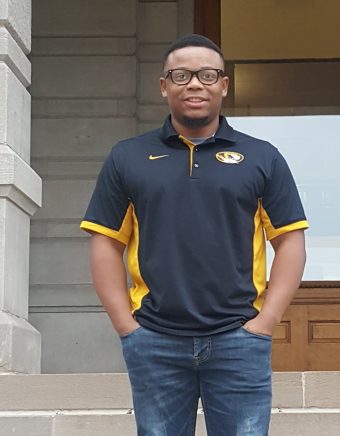 When Rico Atkins returned home to the United States after a tour in Afghanistan with the U.S. Army, he knew he wanted to take advantage of the G.I. Bill to further his education. He just didn’t know where he wanted to do it. After completing his active duty contract, Atkins moved back to St. Louis and began studying at St. Charles Community College.

He first visited Mizzou during a chance road trip to Kansas City that included a pit stop in Columbia.

“I had never been to Columbia and even though it was the middle of the night, I decided to check out campus,” he said. “I was completely blown away and knew immediately that Mizzou was where I wanted to be.”

Atkins said he was impressed by the vibe on campus and its physical beauty--particularly campus landmarks like Jesse Hall, Memorial Union and the Columns lit up against the evening sky.

Atkins enrolled at MU in fall 2016 and is working toward a degree in health sciences with an emphasis in health and wellness. Eventually, he plans to pursue a master’s degree in health administration where he hopes to combine his dedication to helping others with his natural leadership abilities.

He said Mizzou has supported him both as a student and a veteran, and he is an active member of the Student Pre-Occupational Therapy Association and the Missouri Student Veterans Association.

“Mizzou in some ways has a big university feel, but once you’re here, it shrinks,” he said. “I’ve had really positive experiences getting to know other students in my major and connecting with other veterans. Networking is what Mizzou has been all about for me.”

That, and those beautiful columns that caught the light many moons ago.