Every August Mizzou women seeking sorority membership go through Panhellenic recruitment. This year, 1,892 students explored Greek Town in their matching T-shirts, hoping to find a home among the 16 chapters represented there. It can be an exciting and sometimes overwhelming time for the potential new members, or PNMs, but they’re not without guides.

The Mizzou Panhellenic Association selects Panhellenic counselors (or Pi Chis) from across all chapters and trains them to help PNMs through the process. During recruitment, Pi Chis disaffiliate from their chapters and take on the Pi Chi letters, becoming a neutral source of help for the women in their groups. Breckyn Crocker of Kappa Alpha Theta and Chloe Castleberry of Alpha Delta Pi were two of the 82 Pi Chis selected for 2015 PHA Recruitment.

“I wanted to be a Pi Chi because I wanted to help other girls find a place where they feel comfortable,” Castleberry says.

“I believe in the Greek community and what it has to offer as far as building character in young men and women,” Crocker says. “I just think it’s a good way to make those instant connections and have those people that want to make you a better person. I want to help other girls find that same thing.” Crocker and Castleberry helped lead groups of PNMs from Aug. 17 until Bid Day, on Aug. 23. They spent the week reassuring the PNMs, shutting down stereotypes and answering every question they could. One question they were prohibited from answering was which chapter they belonged to.

“The hardest part was when one girl in my group was deciding between my chapter and another and wanted me to tell her what to do,” says Crocker. “I was dying to tell her what chapter I was in.”

The student wouldn’t find out until just before the bids were handed out, when the Pi Chis were finally able to reveal their affiliations and rejoin their houses. She did receive a bid from Kappa Alpha Theta, much to her excitement.

“She opened her Bid Day card and found me and started crying,” says Crocker. “It was the best experience ever. She just texted me, ‘So happy I’m a Theta with you!’” Members of Sigma Kappa jump and scream with excitement as they gather up their new members and head to exit Faurot Field Sunday morning. This year was the first time Bid Day was held on Faurot Field instead of Francis Quadrangle. Members of Zeta Tau Alpha kiss the 50-yard-line before continuing on to exit Faurot Field and walk back to Greek town Sunday morning. The 50 was a popular spot this morning, as everyone had to get their chance to partake in the Mizzou tradition. McKenna Alexander holds her Bid Day card, waiting patiently to open it and see which chapter is waiting to welcome her Sunday morning on Faurot Field. Pi Chi leadership counted down from 10 to the reveal. New members of Alpha Chi Omega excitedly hold their bid day cards after being greeted by senior members on Faurot Field Aug. 23. Chapters were released one by one to walk back to Greek Town. Truman the Tiger runs in front of sorority chapters gathered on the west side of Faurot Field. Many of the seniors pulled Truman aside for group photos and selfies. Students open their bid cards to see which sororities have invited them to join. Freshman race into Greek town to meet up with their respective chapters after the Bid Day reveal on Faurot Field Sunday morning. Everyone was funneled out of Faurot, under the tunnel and into Greek Town, easing the flow of traffic. Members of Kappa Kappa Gamma wave their hands in the air and yell, excited for their chapter-wide photo with new members. Alpha Chi Omega seniors lead their group of new recruits back to Greek Town after the Bid Day reveal on Faurot Field. Members of Alpha Delta Pi dance on the southeast edge of their house as younger members welcome new freshmen into their house. Delta Delta Delta starts their walk back to Greek Town after being released from Faurot Field Sunday morning. All chapters had large, wooden letters decorated with their house colors. 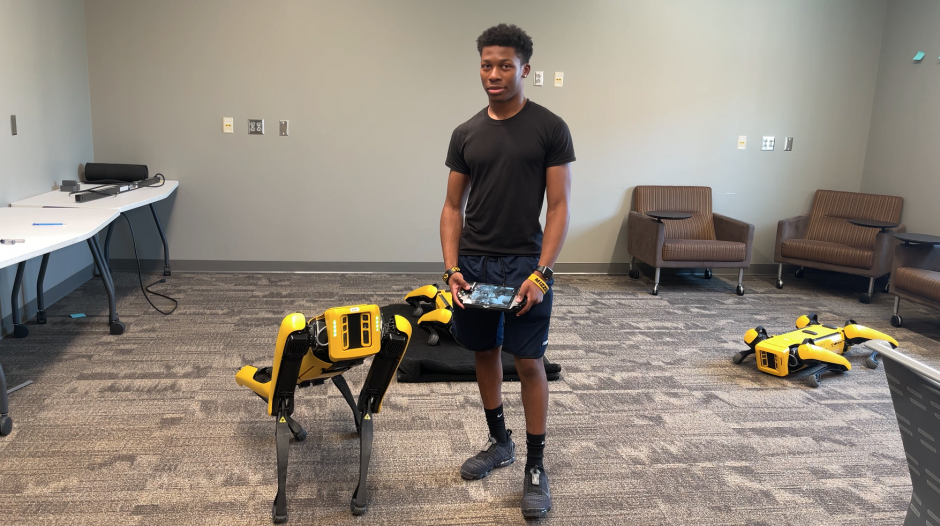