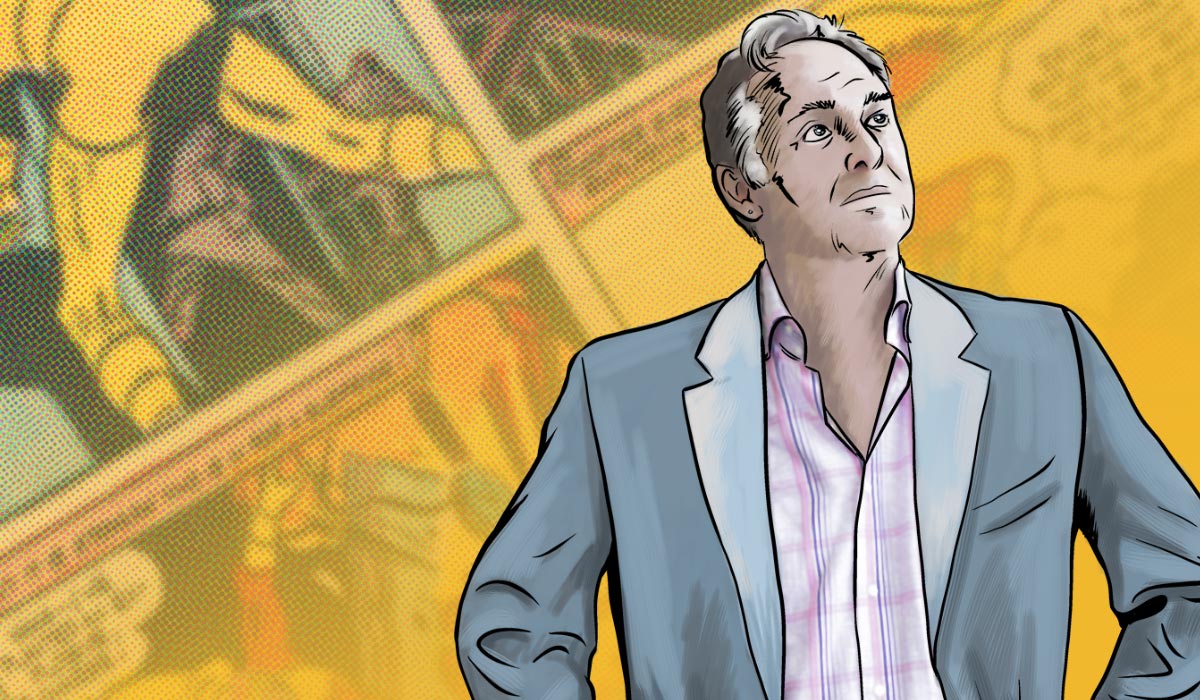 If Andy Hoberek stood out among the wizards, Wolverines and Walking Dead, it was only because his inner comic geek, his alter ego, was concealed behind a professorial houndstooth jacket.

After taking a year to study Watchmen — the acclaimed 1987 graphic novel by Alan Moore and Dave Gibbons, which presents a relatively realistic narrative for the superhero genre — the MU professor of English sojourned to San Diego for Comic-Con International July 9-12, 2015.

The annual four-day celebration of the comic book medium and everything in its periphery draws 130,000 fans, many of whom attend dressed like their favorite colorfully spandexed characters.

“At some point, I realized there are more people attending Comic-Con than people who live in Columbia,” says Hoberek, whose book Considering Watchmen: Poetics, Property, Politics (Rutgers University Press, 2014) was a finalist for an Eisner Award (the Oscars for comics) in the best scholarly/academic work category at the event. “When I got the nomination, I thought, ‘This is my chance to go and see what it’s like.’ ” Hoberek’s book, part of the Comics Culture series that explores the significance of the medium, asks of Watchmen the central question “Is it literature?” before delving into its layered social, cultural and political themes. The story follows a group of mostly retired crime-fighters in a fictional Cold War-era U.S., where costumed vigilantism has been outlawed by the government. When one of the group’s members is murdered, an investigation begins that takes the reader on a fast and furious trip through the past, present and future.

Although hailed as one of TIME magazine’s 100 best novels, Watchmen, and the graphic novel form in general, haven’t received much academic attention until relatively recently. That’s changing.

“There’s a question of expertise. As an English professor, I have to think about images more than when I work on regular novels, and an art professor has to think more about words,” Hoberek says. “It’s sort of like the early days of film studies; people are starting to think of comics in serious ways.”

Considering Watchmen has three sections: poetics, or the novel’s attempt at a more complicated and even literary style atypical in the medium; property, which addresses Moore’s struggle with DC Comics over the rights to his creations; and politics, which sets Watchmen in the context of the 1980s and Margaret Thatcher’s England.

Hoberek spent most of his time writing the book from Sheri-Marie Harrison’s couch, a place he liked “so much he decided to stay.” Hoberek and Harrison, also an English professor at Mizzou, were married in November 2014, and the newlyweds made the San Diego trip together. Andrew Hoberek's wife, Sheri-Marie Harrison, traveled with him to Comic-Con in San Diego. Accustomed to more academic conferences, she was impressed by both the elaborate costumery and the cultural diversity. Hoberek and Harrison are both English professors at Mizzou.

“Comic-Con was the most diverse place I have ever been in my life,” says Harrison, who hails from Jamaica and was educated in Miami, also known for its diversity. “Age, gender, race, people of varied abilities, all dressed in costumes — and everything was accessible. There is something about the comics world that reflects a meaningful commitment to diversity, and that continues to improve with time.”

Harrison’s teaching and research areas include Caribbean, world and postcolonial literature. Hoberek focuses on 20th-century American literature, and he recently took a job on the side as the comics and graphic novels editor for the Los Angeles Review of Books. His courses have also included Maus, the graphic novel Art Spiegelman created about his father’s experiences as a Polish-Jewish Holocaust survivor.

Although Considering Watchmen didn’t win the Eisner, Harrison and Hoberek took in several discussion panels and did plenty of people watching.

“Comic-Con is not for novices,” Harrison says. “If you don’t want to camp out the day before to get into Ballroom A, you’re not going to see everything. We tried going” to the Batman V. Superman: Dawn Of Justice panel, “but getting there 15 minutes before it starts doesn’t work.”

Hoberek is teaching a graphic narrative course this fall at Mizzou.