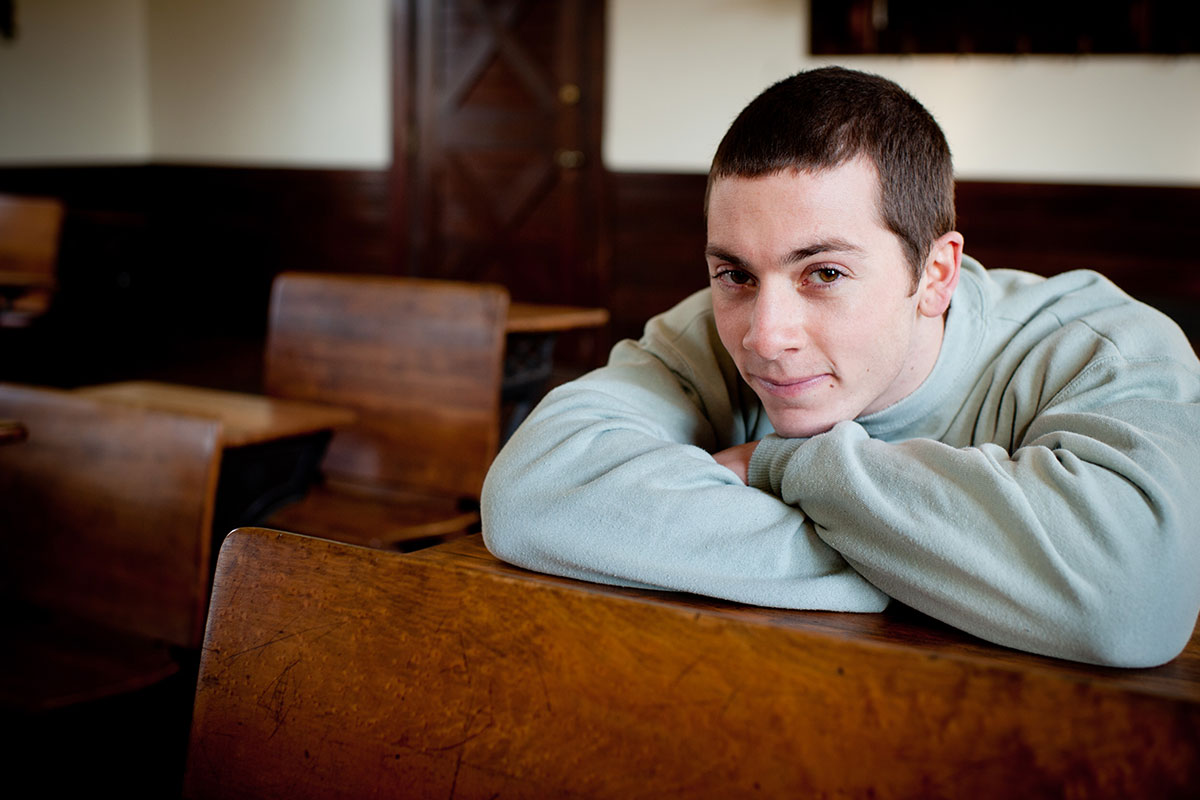 What can be given (gifted, passed on, or paid forward) over and over again, leaves a piece of itself (an impression, tag, memory…) behind, but never gets smaller?

That question was posed to participants in the 2013 Hallmark Storytelling Challenge. The contest, open to all MU students, emerged from collaboration between Mizzou and Hallmark. Contestants were asked to submit a response to the riddle in the form of a story told through any medium.

Senior Grant Johnston’s answer was a children’s story, written in rhyming verse, about a little girl who visits a forest. The gift: a smile.

The story begins with a description of a forest “surrounded by frowns, never a laugh, not even a sound.” Enter the little girl, who explores the forest with a “smile so big, you could see it for miles.” Her smile leads to a change in the forest. “The smiles they had would be the smiles they would share,” the story continues.

Johnston’s story was selected as the winning entry.

“I just tried to think of something creative that was not tangible,” Johnston, a senior from St. Charles, Ill., says. “Smiling is always a good thing.”

His prize: an invitation to Hallmark’s corporate headquarters in Kansas City. In May Johnston will spend two days at Hallmark, where he will have the opportunity to work with the company’s creative minds to build his “smile” concept into a brand, possibly leading to the publication of a children’s book.

“I don’t really know how big this is,” Johnston admits. “I’m looking forward to going to Kansas City for a couple of days and taking it all in. I haven’t really thought about what the magnitude of this really is.”

All of these developments — the win, the invitation to Kansas City, the chance to work with Hallmark — almost didn’t happen.

On the final day submissions were being accepted for the Hallmark Storytelling Challenge, Johnston went to the designated office to turn in his entry but found the door locked. He knocked a couple of times, but there was no answer.

“It was the only time I could get over there to turn it in,” Johnston says.

He slid his story under the door, hoping someone would find it before the deadline. “I didn’t know if anyone even got it,” he says.

Luckily for him, it was received and now is now reaping the rewards. MU senior Grant Johnston, an education major and student teacher, won the 2013 Hallmark Storytelling Challenge with a children's story about the transformative power of a smile.

The Hallmark Storytelling Challenge is part of a collaboration effort between the University of Missouri and Hallmark.

"Hallmark reached out and initiated the conversation about opening the creative process up to the entire student body,” says Charles Davis, an associate professor in the MU School of Journalism. “We're just thrilled at how the competition went and ready to learn from the process and improve it as we move forward.”

Mizzou plans to foster more creative storytelling with help from the Mizzou Advantage initiative Media of the Future. Davis is the initiative's faculty facilitator, though he will relinquish those duties when he leaves MU in July to become the dean of the University of Georgia’s College of Journalism and Mass Communication.

Media of the Future looks at new ways to communicate, educate and market. It draws on the School of Journalism’s century of international leadership in media research and hands-on training, along with other campus strengths in digital technologies, business, public policy, graphic design and writing.

Davis has been working with colleagues such as Pat Okker, an English professor and faculty fellow in the Office of the Provost, to create an interdisciplinary undergraduate degree in digital storytelling. The degree program is broad in nature and would involve the experiential side of storytelling, incorporating multimedia technologies. It targets students interested in video, fiction, documentaries, entertainment, marketing and persuasive media, among other areas.

Deepening the connection with Hallmark, Mizzou recently hired retired Hallmark executive Ron Green as a part-time consultant. Green is working to advance the digital storytelling industry in Kansas City and the Central Midwest and hopes to turn the region into “the Hollywood of short, digital narrative production.”

Green spent 32 years at Hallmark, where he founded Hallmark’s “Creative U” training program and led an initiative to transform Hallmark’s creative workforce from conventional artists and writers to digital-savvy designers and storytellers.

Now, Green is looking to partner with Hallmark, local universities and community colleges, and area development agencies to establish the Mid-American Center for Digital Storytelling. Green sees Mizzou, equipped with the Reynolds Journalism Institute and the Media of the Future Initiative, as an ideal partner for the endeavor.

Meanwhile, Johnston is on track to graduate in May, and he hopes to find a job in secondary education. He came to Mizzou as a journalism major, but his interest in teaching and coaching led to a switch to education. His passion for writing remains intact.

“Creative writing is free; there are no limits,” Johnston says. “That’s the most fun.”

This semester, he is working as a student teacher with math instructor Kevin Taylor at Rock Bridge High School in Columbia. He says the experience has reinforced his interest in becoming a teacher.

“When you get to teach in front of the kids and talk with them, you build connections,” he says, “It’s exciting.”

You might say it brings a smile to his face.

There once was a forest, surrounded by frowns, never a laugh, not even a sound.  The sun would not shine, the flowers would not grow, if anyone was happy, nobody would know.

The squirrels did not climb, the birds not sing, and those three skunks, they were oh so mean.  The frogs did not jump, the lion did not roar, until a little girl, went to explore.

She had pig-tailed hair, a backpack too big, her shoes were untied, and had a pet stick named twig.

She skipped through the forest, with a beautiful smile, a smile so big, you could see it for miles.

She climbed up a tree, a tree very tall, the squirrels took notice, and sprung up in awe.

She sat on a branch, and looked down below, gave the squirrels a smile, and their faces would glow.

She climbed down the tree, and started to sing, about all the beautiful things, this forest could be.

The birds flew down from the sky, her voice rang through their ears, they hadn’t heard anyone so happy, in all of their years.

The girl spotted these birds, and asked them to chirp, she game them a smile, and said it was their turn.

She danced on a log, that three skunks lived under, what was above them, the skunks would discover.

Angry at first they seemed, as they were oh so very mean, and then she gave them a smile, the largest they have ever seen.

Their hearts lit up, the skunks were filled with joy, not a mean bone in the body, happiness they would enjoy.

She hopped over sticks, and rocks by the river, a smile to the frogs, she would deliver.

They smiled right back, frowns they no longer had, they leaped up with joy, hopping across lily pads.

She laid down in exhaustion, where the lonely lion would lay, she gave him a smile, and asked him to play.

The lion smiled back, and let out a giant roar, with a smile like that, this lion was to adore.

And when the little girl left, their smiles would remain, the forest that was, would never be the same.

The sun always shined, the flowers were all grown.  Everyone was happy, this was always known.

The smiles that she gave, were shared around the world.  Who would have thought, it could start with the smile of a little pig-tailed hair girl.