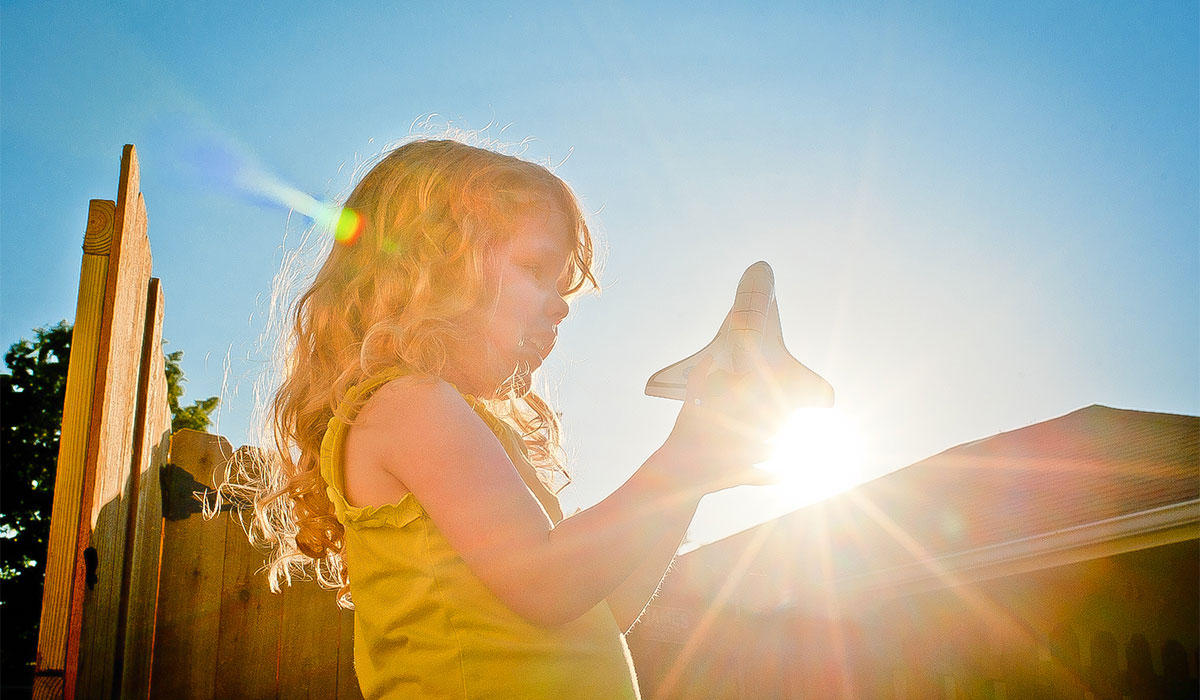 Imagine flying to space alongside Brad Pitt and Angelina Jolie. Vacationing at a hotel floating in orbit. Visiting Mars. If plans pan out for new ventures in the aerospace industry, such cosmic experiences could be within reach.

Space travel long has possessed the American imagination. Science and science fiction have fostered and reflected a national obsession spanning more than half a century. Popular culture has yielded Buck Rogers, Major Tom and 2001: A Space Odyssey, while NASA has given us Project Mercury, Apollo and Curiosity. The whole world was held rapt as a human being set foot on the moon. The whole world mourned as a promising shuttle flight turned to tragedy.

In 2013 the fascination is thriving. Hollywood has released two summer blockbusters with intergalactic-travel themes: Star Trek Into Darkness (marking 47 years on the Enterprise) and the Will Smith flick After Earth. Outside the cinema, we can watch a robotic rover aptly named Curiosity roam the surface of Mars and send data back to earth.  And at a website an ordinary, albeit wealthy, civilian can book a seat on a future suborbital space flight for the cost of a house or a college education.

The space race is on.

The 2011 end to NASA’s space shuttle program at first seemed to signal an idling — or at least a downshift — in Americans’ quest to go where no man has gone before.  Instead, though, the grounding of the shuttle is inspiring visionaries’ full-throttle takeoff into the future of space travel. Former astronauts and married couple Steven Nagel and Linda Godwin, MS '76, PhD '80, have been teaching at Mizzou since retiring from NASA in 2011. With friends, colleagues and students involved in the commercial space business, they're keeping a close eye on developments in the future of space travel.

For Mizzou the shuttle shutdown had an upside. The university promptly hired two prestigious faculty members newly retired from NASA: astronaut Linda Godwin, the second woman to earn a PhD in physics at Mizzou and the fourth woman to walk in space, and her husband, astronaut Steven Nagel, a retired Air Force colonel and former space shuttle commander. Under their tutelage, the next generation of space explorers is taking shape.

Godwin is teaching students in the MU Department of Physics and Astronomy and this fall will teach Physics of Space Flight, a new course. The department recently established an astrophysics degree program, from which the first three students graduated in May, and supports an enthusiastic astronomy club, led by professor Angela Speck. Nagel teaches aerospace propulsion to MU engineering students; one currently has an internship at the space transport company SpaceX. (Tigers already have made a mark there; SpaceX executive Marv Vander Weg holds an MBA from Mizzou.)

In the business world the shuttle program’s closure awakened an entrepreneurial spirit. Private companies now are rapidly developing space-travel technology and programs to transport cargo to the International Space Station, to position satellites, to facilitate scientific research and, ultimately, to satisfy tourists’ wanderlust.

Some companies — such as SpaceX, Boeing and Sierra Nevada — have been launched with seed money from NASA. Private benefactors propel others, including Virgin Galactic (with Virgin’s Richard Branson), Blue Origin (with Amazon.com’s Jeff Bezos) and Bigelow Aerospace (with hotel mogul Robert Bigelow). All are in various stages of developing the capability to send cargo or people to space.

“Commercially, if you look at the difference between now and five or 10 years ago, there’s a lot of stuff going on,” says Nagel. “The whole playing field is changing — to a great extent driven by NASA, which is pulling back from certain things.”

“I’m thoroughly cheering on commercial space. I think that’s our greatest hope for success right now to get back to low Earth orbit and the space station,” Godwin says. “Exploration is what we do as a species. Why wouldn’t we want to do it?”

Right now, Nagel says, SpaceX, a California company founded in 2002 by PayPal entrepreneur Elon Musk, is soaring ahead. In 2010 SpaceX became the first privately funded firm to successfully launch, orbit and recover a spacecraft, and in 2012, under a contract with NASA, it became the first private company to send an unmanned spacecraft to the International Space Station, delivering supplies.

In April Orbital Sciences, a company that has built satellites and launch vehicles since 1982, tested its rocket Antares, which could follow in SpaceX’s contrails, taking cargo to the space station.

“Exploration is what we do as people, and we shouldn't just stop. There’s so much good that comes from it.”

Also in April, Virgin Galactic successfully completed a supersonic rocket-powered test flight of its SpaceShipTwo, a commercial spacecraft designed to transport human passengers into space. So far more than 530 people have booked seats on Virgin Galactic’s commercial flights, though the date of the maiden voyage hasn’t yet been confirmed. Not surprisingly, given the $200,000 price tag, the roster includes celebrities and millionaires, such as Stephen Hawking, Tom Hanks and Mizzou alumnus Brad Pitt.

“It’s not all going to succeed, but it will be interesting to see what all this evolves into,” Nagel says.

The important ingredient is funding. Space travel is expensive, and NASA, a government agency, was required to keep what Nagel and Godwin call a “standing army” of personnel at the ready between shuttle flights to ensure safety and success. Private companies might be leaner and more nimble, but they rely on clients and investors for funding.

“It’s all kind of fascinating if it plays out, but will the money come? Will the investors be satisfied?” Godwin wonders. The U.S. government is by no means out of the space game. Along with undertaking the Mars rover program, NASA has launched the unmanned spacecraft New Horizons, which is set to reach Pluto in 2015, and Messenger, which is currently orbiting Mercury. The agency also is working on a next-generation crew capsule and rocket for humans to explore beyond Earth's orbit, although budget challenges have delayed flight date projections.

Two American astronauts are on the International Space Station, which serves in part as a floating research lab. To get them there, though, the U.S. pays Russia millions for transportation on the Soyuz space craft. Currently only Russia and China have government programs in place to transport people into space — a fact that makes Mizzou’s astronauts uneasy.

“I don’t like being left in the dust. I don’t like our country not to be up there. We’ve just taken baby steps; do we want to stop now?” Godwin says. “I was a kid who grew up reading science fiction, and it’s kind of my dream. I’m not going to back off.”

Russia was an early participant in space tourism. In 2001 Dennis Tito, a 61-year-old California millionaire and former NASA engineer, paid the Russian Space Agency $20 million for a trip to the International Space Station aboard the Soyuz.  Since then the U.S. company Space Adventures has arranged for six more space-tourism flights — all aboard the Soyuz.

Once civilians are launched into space, where exactly might they land?

“They’re either going to be space stations, or they’re going to be the moon,” Godwin anticipates.

There are three levels of space flight, Nagel explains: suborbital, orbital and beyond Earth’s orbit. Most currently viable commercial space tourism projects offer a suborbital experience; the vehicle is launched into space and then falls back to earth, with passengers experiencing weightlessness for a few minutes.  Private companies make vehicles to launch satellites into any of Earth’s three main bands of orbit — low Earth orbit, medium Earth orbit and geostationary orbit — but currently the only humans orbiting Earth are aboard the International Space Station.

Bigelow Aerospace has plans to build an orbital inflatable hotel, expanding on technology developed at NASA, that could attract space tourists and also might offer rentable laboratory space for scientific experiments.

Aside from six NASA moon missions more than 40 years ago, all vessels flying beyond Earth’s orbit so far have been unmanned. To Godwin and Nagel, returning to the moon — either for tourism or for science — seems like a sensible next step. Nagel says the moon could be explored for potential sources of oxygen and sources of power and could be used to position telescopes shielded from the Earth and its radiation emissions. At MU's Laws Observatory Kevin Popejoy takes a look at Venus crossing the sun's face for the last time this century.

“We’ve barely touched the moon,” Godwin says. “We still don’t know a lot about its surface. It’s where you could test out a lot of what it would be like to go to Mars in a much more achievable situation.”

Speaking of Mars, this spring Dennis Tito, the multimillionaire space tourist, announced that he plans to fund a manned mission to orbit Mars in five years, and he’s seeking two people — preferably a married couple — to take on the 501-day mission. A certain Mizzou couple comes to mind…

Both chuckle wistfully at the suggestion of returning to space. Both mention their daughter, an eighth-grader who needs her parents on Earth.

“Maybe I’ve used up all my risk that I had out there to use,” Godwin says.

“I had my shot; the shuttle was great. I’d probably leave it for someone else," Nagel says. "I’m more of an airplane guy.”