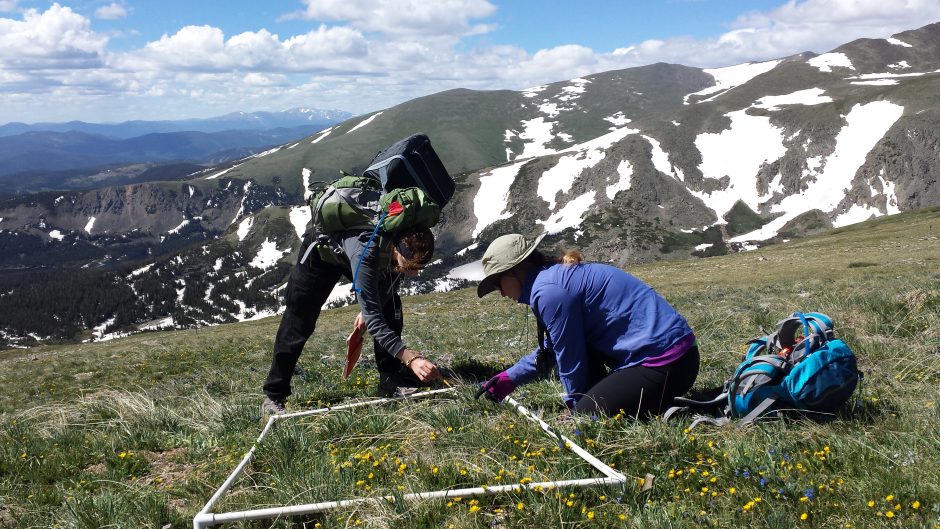 Researchers work in the high elevations of the Rocky Mountains of Colorado — known as alpine regions. 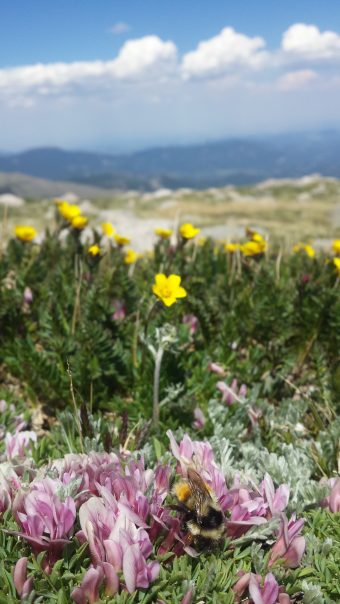 In the high elevations of the Rocky Mountains of Colorado — known as alpine regions — bumblebees have adapted to living above the timberline, where temperatures are traditionally cold and the summer growing season that their survival depends on is short.

But a new study by scientists at University of Missouri and Webster University has found warming temperatures — as a result of climate change — are threatening the future of these once abundant pollinators. Their decline can impact ecology as a whole, including human life, said Candace Galen, professor emerita of biological sciences at MU and co-author on the study.

“As the climate warms and becomes more variable, organisms specialized to past conditions are declining,” Galen said. “We are losing biodiversity at a rapid clip and with it, the ecological services, including pollination services, that enrich and sustain our lives.”

Nicole Miller-Struttmann, the Laurance L. Browning, Jr. Endowed Professor in Biological Sciences at Webster University and co-author on the study, said alpine bumblebees still primarily collect nectar and pollen from flowers during the short time period that was more normal in these alpine regions 50 years ago, and they have not adapted to collecting over longer and more variable periods of time.

The alpine bumblebees are suffering because they’re “stuck in a rut,” said Miller-Struttmann, who is also an associate professor of biology.

“We predict local extinction in areas where the alpine bees can‘t migrate further upslope, where the weather is cooler and the growing season still remains short,” said Miller-Struttmann, who worked on the study while she was a postdoctoral fellow at MU. “They are not responding to the temperature changes fast enough because they are stuck in an evolutionary trap.”

The study combines data from the summers of 2012-2014 on three mountains in Colorado with historical records of alpine plants and bumblebees dating back to the mid-1970s. 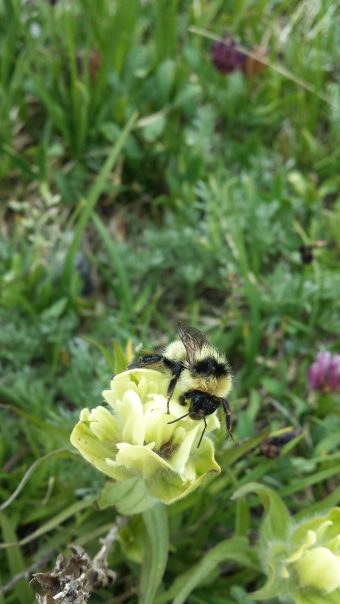 The longer growing season and warming temperatures are also allowing bumblebees from lower elevations — who are more opportunistic foragers — the opportunity to move upward into the alpine regions.

During her senior year at a small liberal arts college in her hometown of Portland, Oregon, Galen attended a seminar where the guest speaker, Peter G. Kevan, talked about his upcoming project in the Rocky Mountains to study flowers and their pollinators, including bumblebees.

During the presentation, Kevan asked the audience for volunteers to serve as research assistants to help with the project. Galen couldn’t believe it — he was describing her dream job because it combined her passion for science with her love of being in nature. She volunteered and discovered another love — studying bumblebees. That was nearly 50 years ago.

Since then, Galen has authored or contributed to more than 100 studies on the topics of alpine plants and bumblebees. For her, it’s both amazing and humbling to continue her work with this study.

“I never thought that maybe 50 years later I’d be able to look back on what I’ve done [with that project] and see how much things have changed since then,” she said. “At the time, my mentor and his cohort of scientists really did us a favor by providing a baseline through those initial surveys for the work we did with this study, and I was fortunate to be part of that.”

The study, “Climate driven disruption of transitional alpine bumblebee communities,” was published in Global Change Biology. Recent MU alumnus Zachary Miller also contributed to the study while he was an MU graduate student. Galen would also like to acknowledge the team of energetic MU undergraduate students who rose before dawn most days of the summer to hike up above 13,000 feet searching for bumblebees.

Funding was provided by a pair of grants from the National Science Foundation, the Mountain Area Land Trust, the University of Missouri and Webster University. The content is solely the responsibility of the authors and does not necessarily represent the official views of the funding agencies.