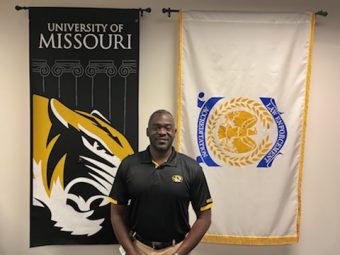 Avery Green served as a summer intern with the University of Missouri Police Department.

Maj. Avery Moore was not a typical summer intern.

When Moore, 46, joined the University of Missouri Police Department in May, he arrived with more than 20 years of experience as a major with the United States Army Military Police Corps and the Army Acquisitions Corps. His work as an intern this summer at MUPD came through the U.S. Department of Defense’s SkillBridge Program, which helps service members transition from military life to the civilian workforce.

Moore, who is retiring from the military, will be a student this fall at the MU School of Law. His internship with MUPD was an opportunity to assist the department while also getting to know the Columbia community. His internship came at no cost to MUPD through the SkillBridge program.

“This is the first time we’ve ever had an intern like this,” MUPD Major Scott Richardson said. “His service was very helpful because he was able to complete some projects that we haven’t had time to do.”

As a member of the military police, Moore worked to protect people and property on Army installations by enforcing military laws and regulations, while also being trained as a soldier. During his internship with MUPD, Moore completed a number of projects, which included plotting about 130 cameras in parking garages across campus to a computer program which now allows for quick surveillance of the areas. Additionally, Moore rode along with every officer on all three shifts to discuss with them their duties and ways to enhance their capabilities. He also put MUPD in touch with personnel at Fort Leonard Wood in Missouri and Fort Still in Oklahoma, for future recruiting of individuals leaving the military who are interested in a career in law enforcement.

“His time with MUPD was very valuable,” Richardson said.

Moore, who grew up in Raleigh, North Carolina, first worked as an accountant after graduating with a bachelor’s degree from the University of North Carolina in Greensboro. Eager for more excitement on the job, Moore joined the Army and settled into a near 21-year career with the military police. During his time with the Army, he earned a master’s degree in business and organizational security management from Webster University in St. Louis.

In the months leading up to his retirement, Moore decided to take advantage of the SkillBridge program, which allows service members to gain valuable civilian work experience through specific industry training, apprenticeships or internships during the last 180 days of service. The program started in 2011 to address concerns about U.S. military personnel returning to civilian life following the 2008 financial crisis.

Moore said his summer with MUPD has helped with his transition to civilian life. He is looking forward to law school, where he’s considering a new career in criminal law.

“The last three months working at MUPD has really been great for me,” he said. “MUPD is good department with an important mission. I have a much better understanding and appreciation for what everyone here does.”