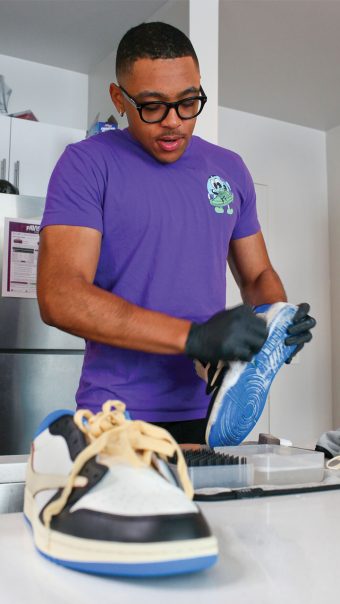 Blake Brown was thirsty. A water bottle at Navy Pier cost $5. At a convenience store a few blocks away, his dad, Tim Brown, BGS ’87, bought the same bottle for $1. That day, Blake became an entrepreneur: He spent the summer selling marked-up water bottles in front of his dad’s insurance agency in Oak Park, Illinois. With his earnings, he bought sneakers.

Today, the senior marketing major runs BTB Kicks, a shoe restoration business he started in 2019. “I never liked having dirty shoes,” says Brown, who owns more than 30 pairs of stylish footwear. “Being a sneakerhead, you have to keep your shoes clean.” His classmates took notice and started asking Brown to bring their kicks back to life.

It takes 45 minutes to an hour to clean a pair of shoes, a process he has refined by watching hours of YouTube videos and practicing on his own shoes. He cleans several pairs a week.

For now, BTB Kicks is a side hustle — Brown interned at PwC this past summer and hopes to work there after he graduates — but he plans to open a storefront in Chicago one day. “I love how I can take a shoe that’s beat and give it a new life.”