Being popular in middle school doesn’t necessarily mean being well-liked.

A new study from a researcher at the University of Missouri found that middle school students generally consider well-liked classmates to be those who are high achieving academically as well as helpful, kind and cooperative. However, those who are considered popular are sometimes seen as mean and aggressive toward others. The difference lies in how long the students have been together as classmates.

The findings can help teachers tailor support toward students who may not feel welcomed, as well as praise the prosocial behaviors they want their students to emulate.

“Adolescents are hyper aware of what others think of them, as well as who among their peers they think is popular or well-liked,” said Nicole Brass, the study’s lead author and post-doctoral fellow in the MU College of Education and Human Development. “Student perceptions of social status is really important when building peer relationships in adolescence and middle school.”

Roughly half of the surveyed students had been together as classmates in the same school since kindergarten, and the other half had transitioned to a new middle school after attending elementary school elsewhere. Brass found that for both groups, the most well-liked students were reported to be high achieving academically and exhibited prosocial behaviors, or behaviors intended to help others, including kindness, sharing and cooperating.

“The main conclusion is that school context matters, as the transition group showed that the most popular students are not always the most well-liked,” Brass said. “A classic example of this is in the Lindsey Lohan movie ‘Mean Girls,’ where Regina George is the most popular girl in school, yet nobody really likes her due to her mean personality and everybody fears her.”

Since adolescents can be easily influenced by their peers at school, Brass explained that students may mimic the characteristics, for better or for worse, of those they view most popular.

“If the popular students are mean, we don’t want the other kids thinking it is okay to be mean or that aggression is the key to becoming more popular,” Brass said. “Rather, if we can develop interventions to help the peer dynamics to be more positive and prosocial, those traits can spread to others, too.” 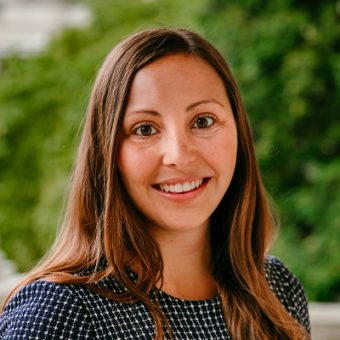 Nicole Brass is a post-doctoral fellow in the MU College of Education and Human Development.

Brass added that previous research has shown prosocial adolescents feel more accepted at school, get better grades and test scores, are happier, better liked by their peers and even go on to have more successful careers and relationships.

“Teachers can play a key role in cultivating a more positive school climate by praising students who are showing prosocial behaviors and choosing carefully who gets paired with who when assigning group projects,” Brass said. “This research can help us brainstorm how best to support teachers in promoting prosocial behaviors among students and all the positive outcomes that come with it.”

Brass is currently collaborating with Christi Bergin, a research professor in the MU College of Education and Human Development, in developing a virtual professional development series for teachers and research experts to discuss various school topics, including bullying, popularity, school climate and prosocial behaviors.

“Changes in behavioral correlates of social status during early adolescence: Does school context matter?” was published in Developmental Psychology. Allison Ryan of the University of Michigan was a co-author on the study.