Thanks to a new commercial, University of Missouri fans all over the country can share the spirit of Mizzou — all from the comfort of their own homes and screens. Filmed this summer on locations all over campus, the new 30-second spot recently premiered on the SEC Network, ESPN, CBS, Hulu and social media.

Of course, it wouldn’t be a Mizzou piece without hands-on Tiger involvement. Production was a collaboration between MU’s Joint Office of Strategic Communication and Marketing and Columbia-based production company Chimaeric Motion Pictures, and the filming process featured current students and faculty on both sides of the camera.

Take a look behind the scenes at how the commercial was made.

Who better to tell the Mizzou story than Tigers themselves? When Mizzou marketing student employees Olivia Jansen and Ty Small were offered the chance to assist with pre-production and filming, they knew it was a once-in-a-college-career opportunity. Fortunately, with their extensive experience helping the marketing team create attention-grabbing digital ads for prospective students, they were more than up for the challenge. 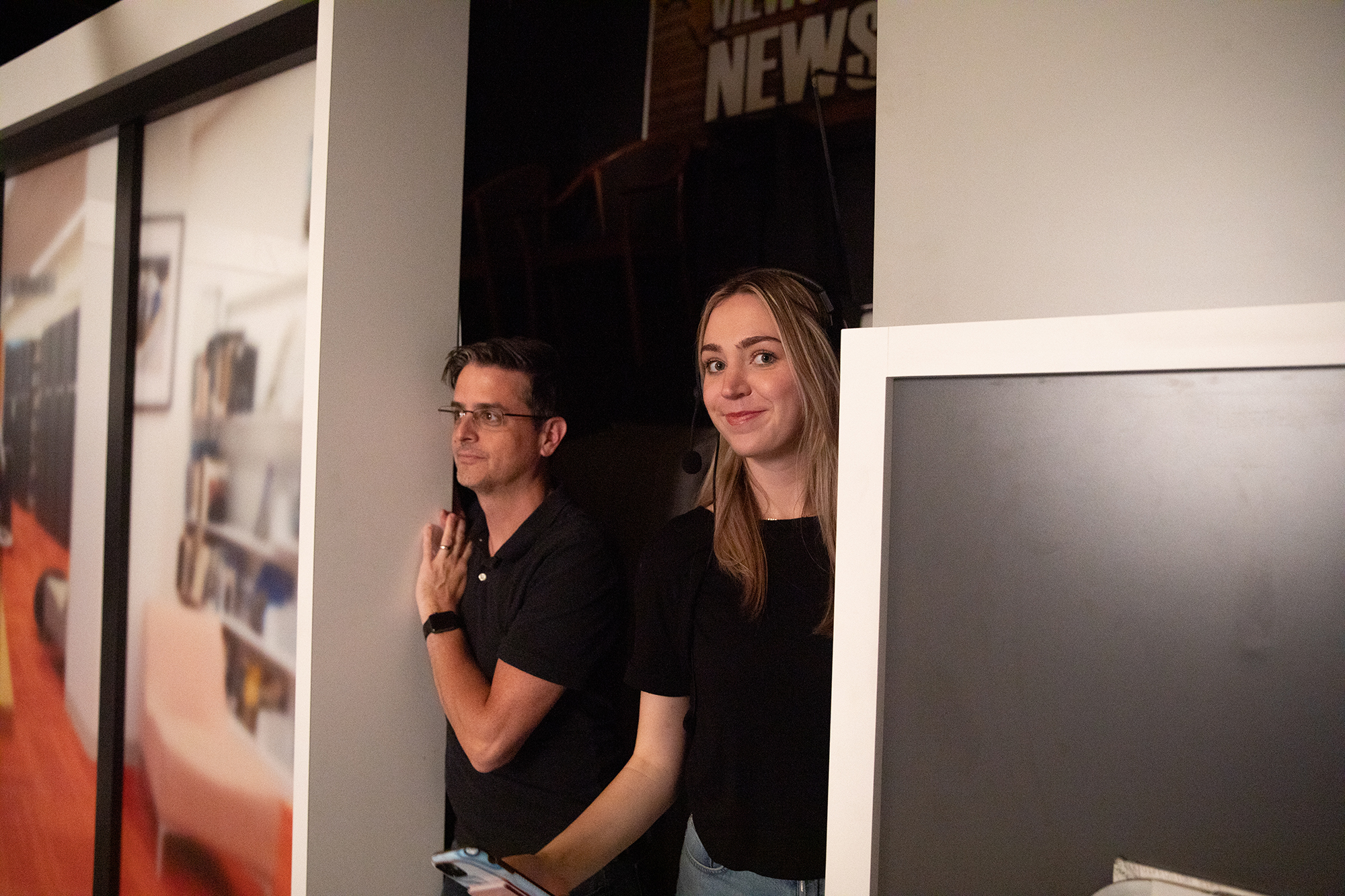 Olivia Jansen, right, watches filming in one of the locations she helped scout as a student employee for Mizzou Marketing.

Jansen and Small experienced firsthand the amount of planning and coordination that goes into creating a successful commercial. Along with organizing talent, location scouting and production assistance, they even have brief cameos in the ad.

“It was amazing to be able to see all of that work behind the scenes,” Small said. “I was really impressed with how efficient the process seemed. It felt like we were all on the same page.”

The students’ contributions were keenly appreciated throughout the production process.

“As a Mizzou J-School graduate myself, it’s energizing to help students share their school pride and gain invaluable marketing experience in such a distinctly Mizzou, hands-on way,” said Jaime Morgans, Mizzou Marketing Director. “It’s such a privilege to showcase Mizzou, represent the great work going on at the university and to see the impact on our students.” 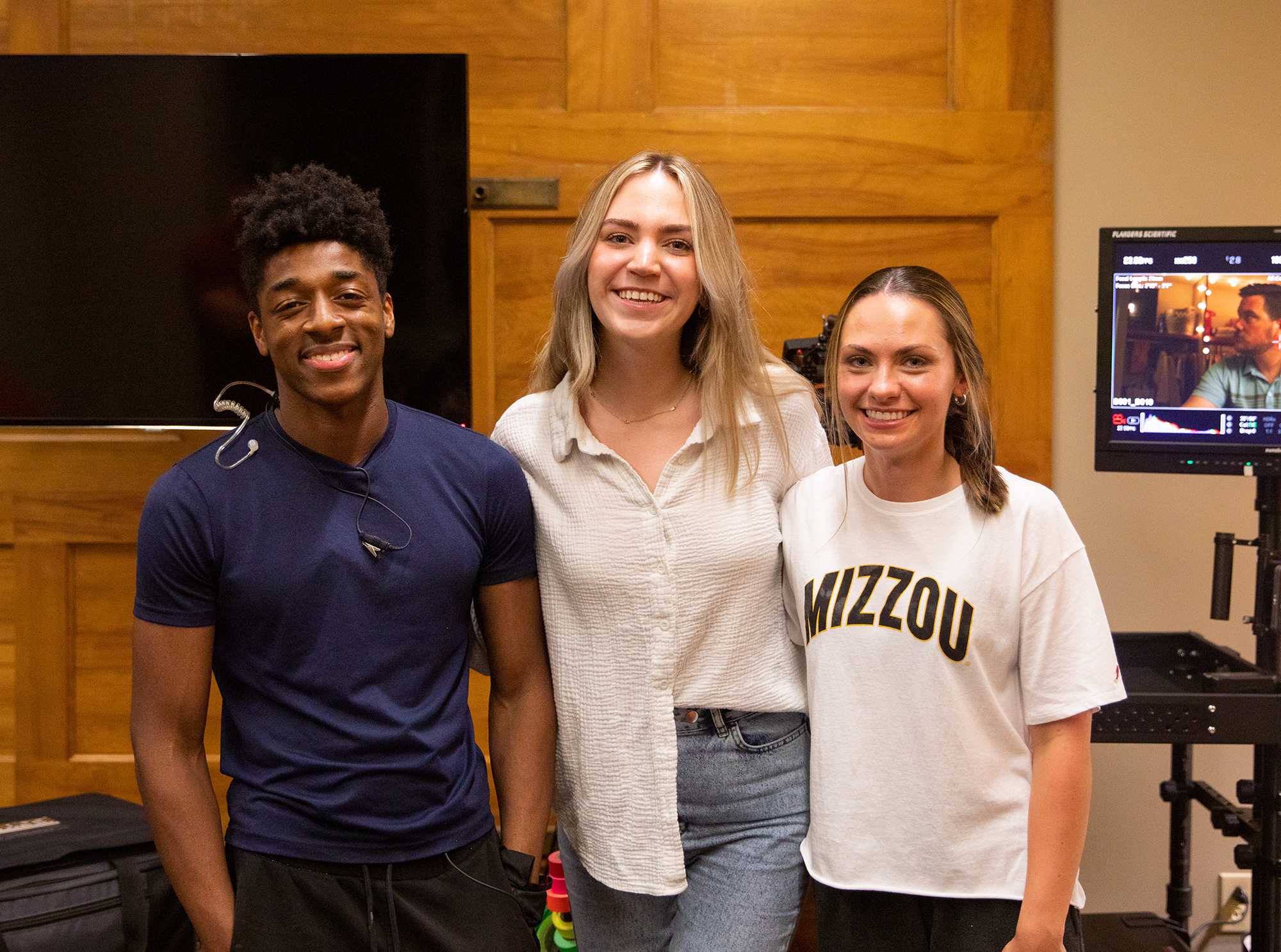 Ty Small, Olivia Jansen and Hunter Mesko pose on set. Mesko is the commercials’ main character, and Small and Jansen make brief cameos. Can you spot them?

Mesko and fellow Tiger Trevontae’ Haughton star as energetic and engaged students — roles that reflect their experience on campus. Mesko, a member of Tour Team, and Haughton, an undergraduate research assistant, became aware of the opportunity through other activities they’re involved with on campus. 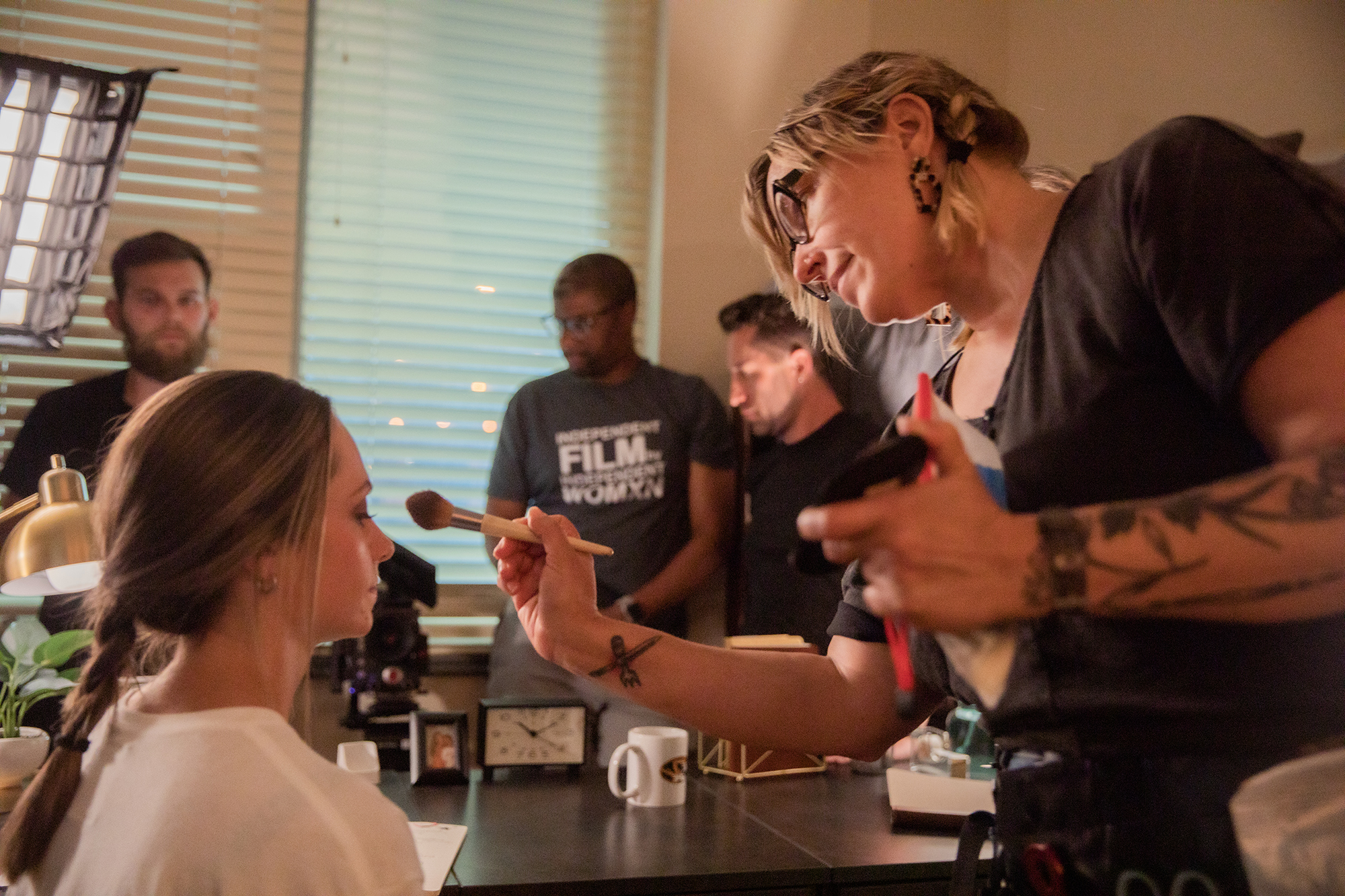 Mesko gets her makeup touched up on set in between takes. "Time spent working on set seemed to pass very quickly because it was such a new and exciting environment,” she said. “Being a student at Mizzou has completely transformed me as an individual, and I love the idea of being able to share my pride for the university with a bigger audience.” 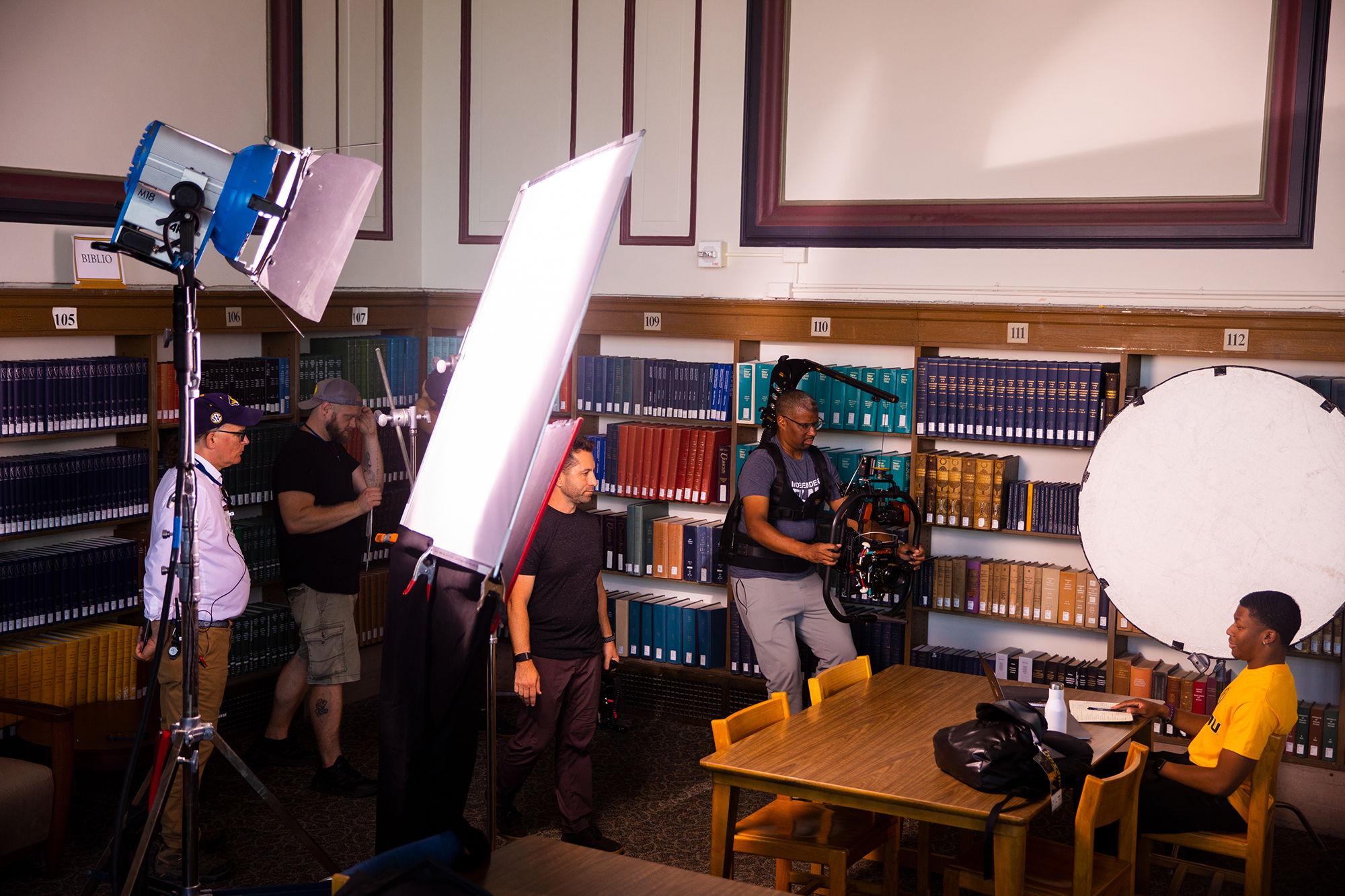 Iconic locations all over campus were used in filming. Here, Haughton gets ready for a close-up in Ellis Library.

Mizzou faculty are also an important part of the commercial. Prasad Calyam, a professor of electrical engineering and computer science in the College of Engineering, appears as a faculty mentor — a role that isn’t much of a stretch considering Calyam was recently named the inaugural recipient of the Robin Walker Award for Graduate Student Mentoring. 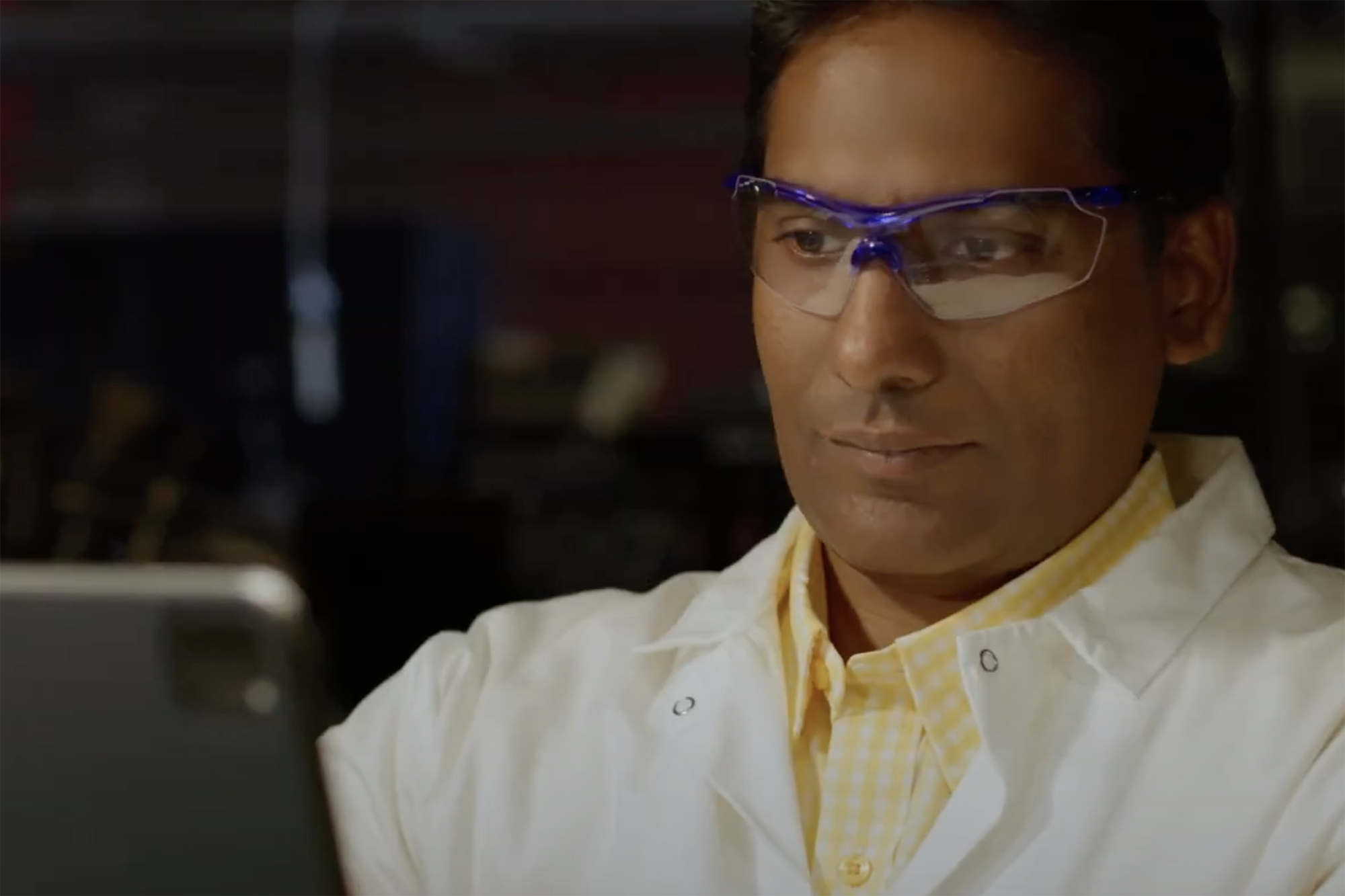 “This commercial was a great opportunity to showcase my typical day at Mizzou,” Calyam said. “Working with superstar students, amazing colleagues and world-class resources … I’m grateful for Mizzou.”

Since it’s impossible to sum up everything that makes Mizzou special in less than a minute, the production team’s main goal was to tell a compelling story that encapsulates as many distinct facets of the Tiger experience as possible. Student research, the Missouri Method and collaboration are all consistent themes that the MU community will recognize.

Haughton said one of his favorite moments was getting to explore microbiology during the shoot. With proper supervision, Haughton donned a lab coat, gloves and glasses to film in one of the Roy Blunt NextGen Precision Health building wet labs and fume chambers.

“I loved the experience,” Haughton said. “Everyone was friendly, professional and willing to have genuine interactions with each other. It was a very fun environment!”

One of those interactions came from spending time in between takes with co-star Calyam, who also serves as the director of the university’s Cyber Education, Research and Infrastructure Center (CERI). What started as conversations over their shared interest in cybersecurity research turned into an ongoing collaboration. Since concluding the commercial project, the two have continued to work together and Haughton now works as a research assistant at the CERI center. 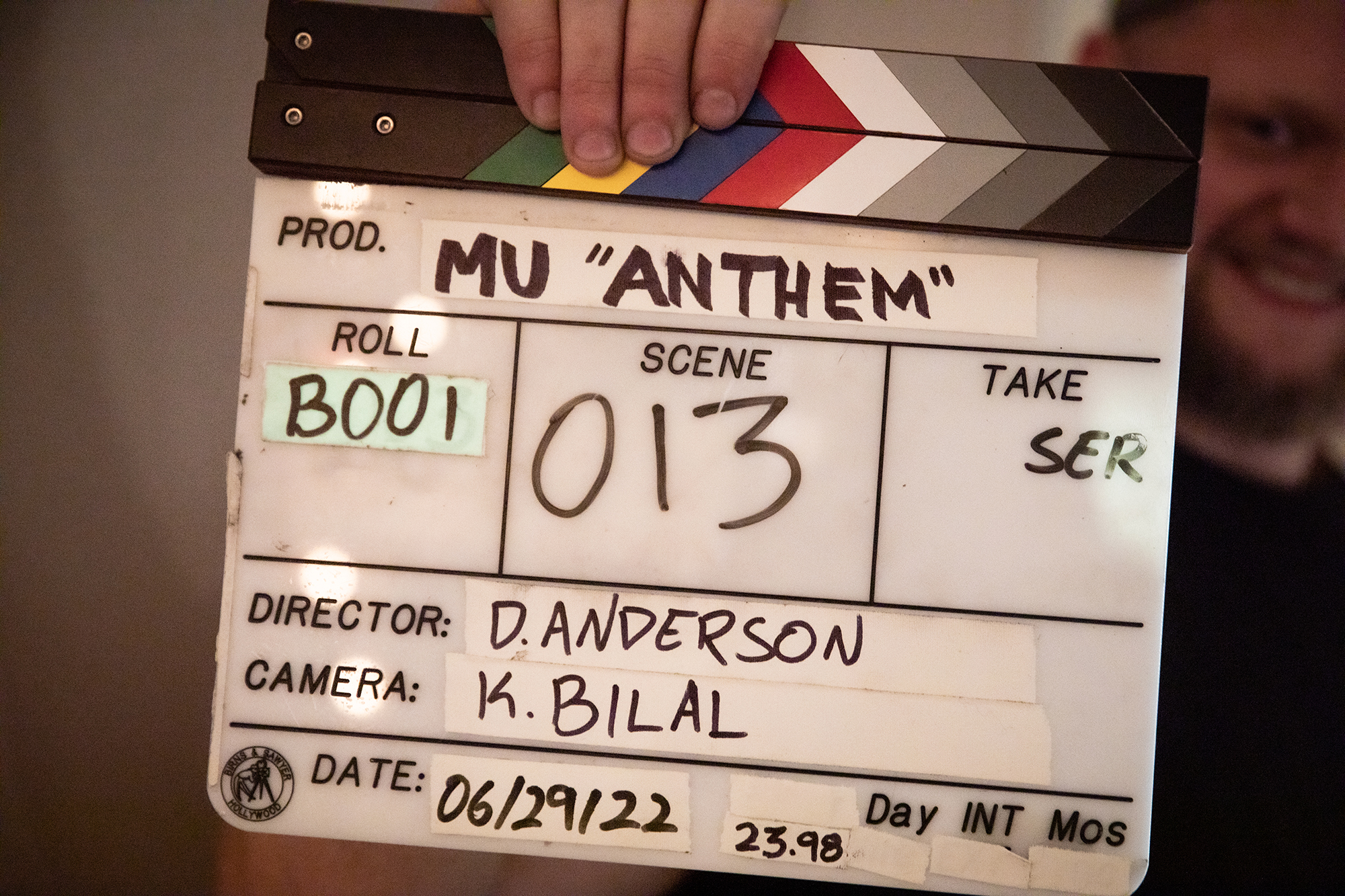 In order to film the video spot, Mizzou’s Joint Office of Strategic Communication and Marketing worked in tandem with local production company Chimaeric Motion Pictures. The shoot only took three days, but the entire production time was about six months.

It starts with a flicker …

Although the institutional spot’s runtime is only 30 seconds long, the excitement generated through months of hard work by the production teams and cast will last much longer. “This was one of the most memorable experiences of my life and I had a lot of fun working with everyone,” Mesko said. “I feel honored to have had the opportunity to represent Mizzou in this way."