When John Dodam first joined the University of Missouri College of Veterinary Medicine faculty in the mid-1990s and heard about the mule team, he didn’t understand the attraction.

A pair of mules named Hillda and Louise acting as ambassadors for the university?

Then he met the mules and noticed the parade of students from all over campus regularly dropping by the barn to visit Hillda and Louise. He watched in wonder as crowds cheered the marching mule team — with black-and-gold wagon in tow — clopping down the street, entertaining audiences statewide. Alumni raved about them; some even visited the mules during football weekends.

“The Mule Team is a phenomenon unique to Mizzou,” said Dodam, who was so enamored by these intelligent, loyal, hard-working giants that he purchased a pair for his own piece of land. “It’s incredible the impact Mizzou’s mules have on people.”

Today, Dodam, professor and chair of the Department of Veterinary Medicine and Surgery, oversees the training of Mizzou’s Mule Teams — three pairings: Tim and Terry; Boone and George; Bess and Rose — and the veterinary students who care for them.

It’s been nearly 40 years since the first mule team was brought to MU in 1984 by Robert Kahrs, then dean of the College of Veterinary Medicine. The pair — Hillda and Louise — quickly became the goodwill ambassadors for the college, and, by extension, the university.

“The mules are a hit everywhere they go,” Dodam said. 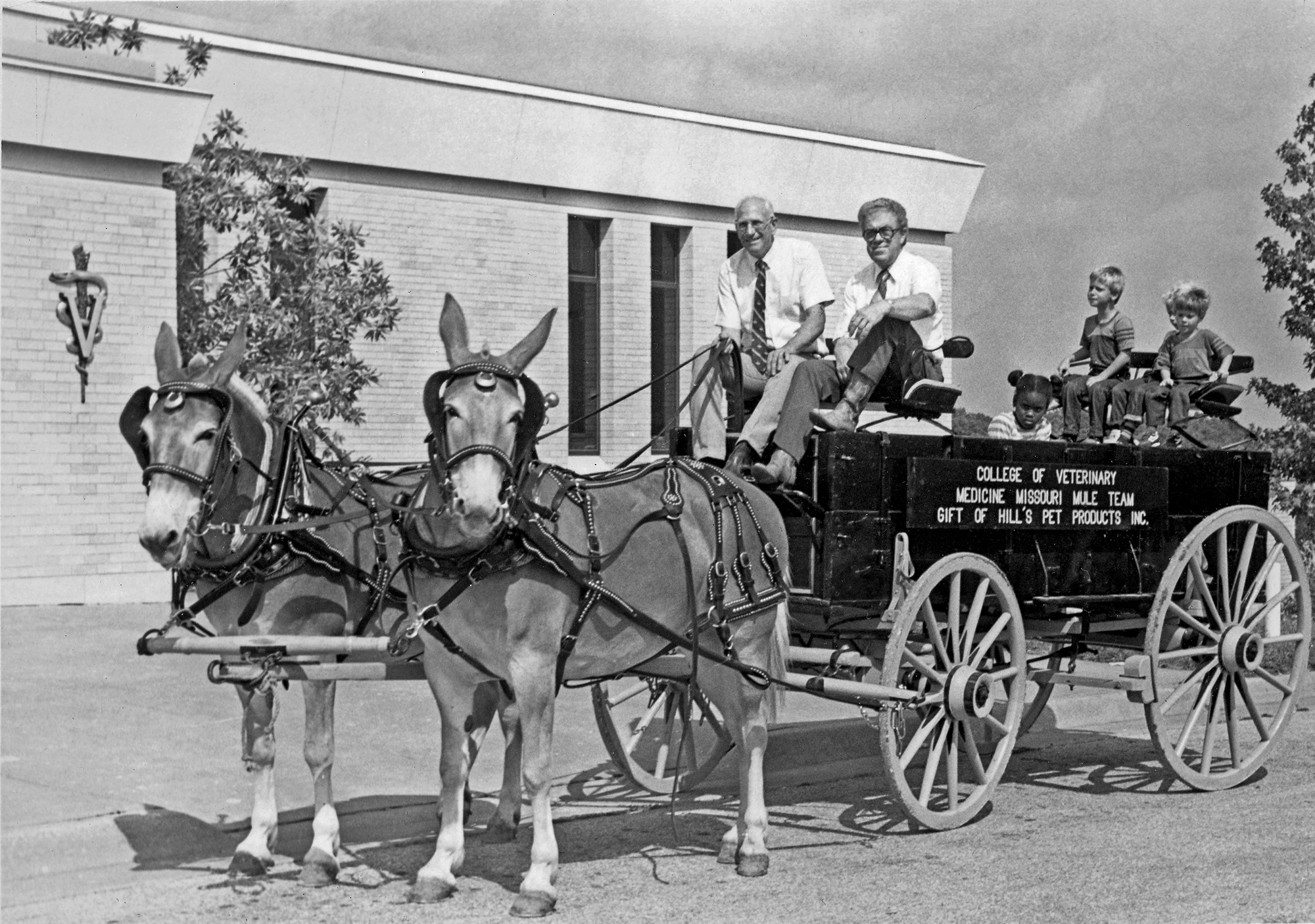 Former dean Robert Kahrs, left, holds the reins to Hillda and Louise in the mid-1980s — shortly after the mules arrived at Mizzou.

The mules also make an indelible mark on the veterinary students who feed, groom and care for them. Twice a day, every day of the year, no matter the weather, members of the Mule Club tend to the animals. They also learn how to hitch, harness and drive the mule team for public events.

The secret to caring for the mules isn’t control or dominance — it’s about establishing a relationship.

“Mules are superior to horses because they are stronger, more disease resistant, feed efficient heat tolerant and smarter, for better or worse,” Dodam said. “They have to be comfortable with what you are asking them to do, and that’s the part that makes training them tricky. It’s a relationship that requires trust.”

For students like Emily Shanks, a second-year veterinary student and president of the Mule Club, building that relationship is what has made her bond with the mules so strong because she had to earn the animals’ trust, not demand it.

Shanks remembers the early days with the mules when they would test her patience by bolting through open gates or galivanting through the pasture, refusing to come in the barn.

“What am I doing wrong?” she lamented.

But Shanks remained committed and cool-headed. In time, the mules cooperated.

“Eventually, when I had built that bond with them, and they would go the way I wanted them to go because they knew the expectation, it made me feel so good,” Shanks said. “It made me pretty proud.”

Mules on my mind

Shanks grew up in Vienna, Missouri, where her grandfather raised Percheron draft horses on the family farm. During the summer, she’d ride with him in a horse-drawn wagon to feed cattle in the field. She loved the large, gentle-natured horses. So, when she came to Mizzou and discovered the mules, Shanks was over the moon with the sweet smell of hay, those velvety noses and the clop, clop, clop of sturdy hooves.

“It was so nice to come down here and see the mules,” Shanks said. “It was like having a little bit of home in the middle of school.”

Rarely does a shift pass that Shanks isn’t met by someone eager to visit the mules. She remembers a journalism student decked out in cap and grown who arrived at the barn for a graduation picture with the pack. Students even rush down before tests to rub a mule’s nose for good luck.

Shanks understands the appeal and can’t imagine her Mizzou experience without the mules. For her, there is nothing like the sight of the long-eared giants, racing across the pasture to greet her after a long day of school.

“They know when I’m coming, especially if I’m the only truck in the lot or I’m a little late,” Shanks said. “They’ll come running down the hill like ‘She’s finally here!’ It feels so good.”

Folks in Missouri have a soft spot for mules because these mammoth creatures play an important role in the state’s history. According to tradition, in 1822, William Becknell of Howard County led the first trading party over the Santa Fe Trail and returned with a herd of mules and donkeys from Mexico. With a growing number of pioneers traveling west, Missouri breeders recognized the need for a hardy animal to endure the rigors of the 900-mile journey and decided to breed big draft mares with mammoth donkeys.

The result — the incredible Missouri Mule, which anyone with any equine sense will tell you is hard to match for power, wit and endurance. Besides that, they’re good looking and huge, weighing between 820 and 1,500 pounds. Missouri designated the Missouri Mule as the official state animal in 1995.

Today, Mizzou has three mule teams — Tim and Terry, who retired two years ago after pulling the wagon for 27 years; Boone (named after John William “Blind” Boone) and George (named after George Washington Carver), who are now the main mule team; and Bess (named after Bess Truman, whose husband, former President Harry Truman, was the son of a mule breeder) and Rose (named after Rose O’Neill, a Missouri artist), who are the mule-team-in-training.