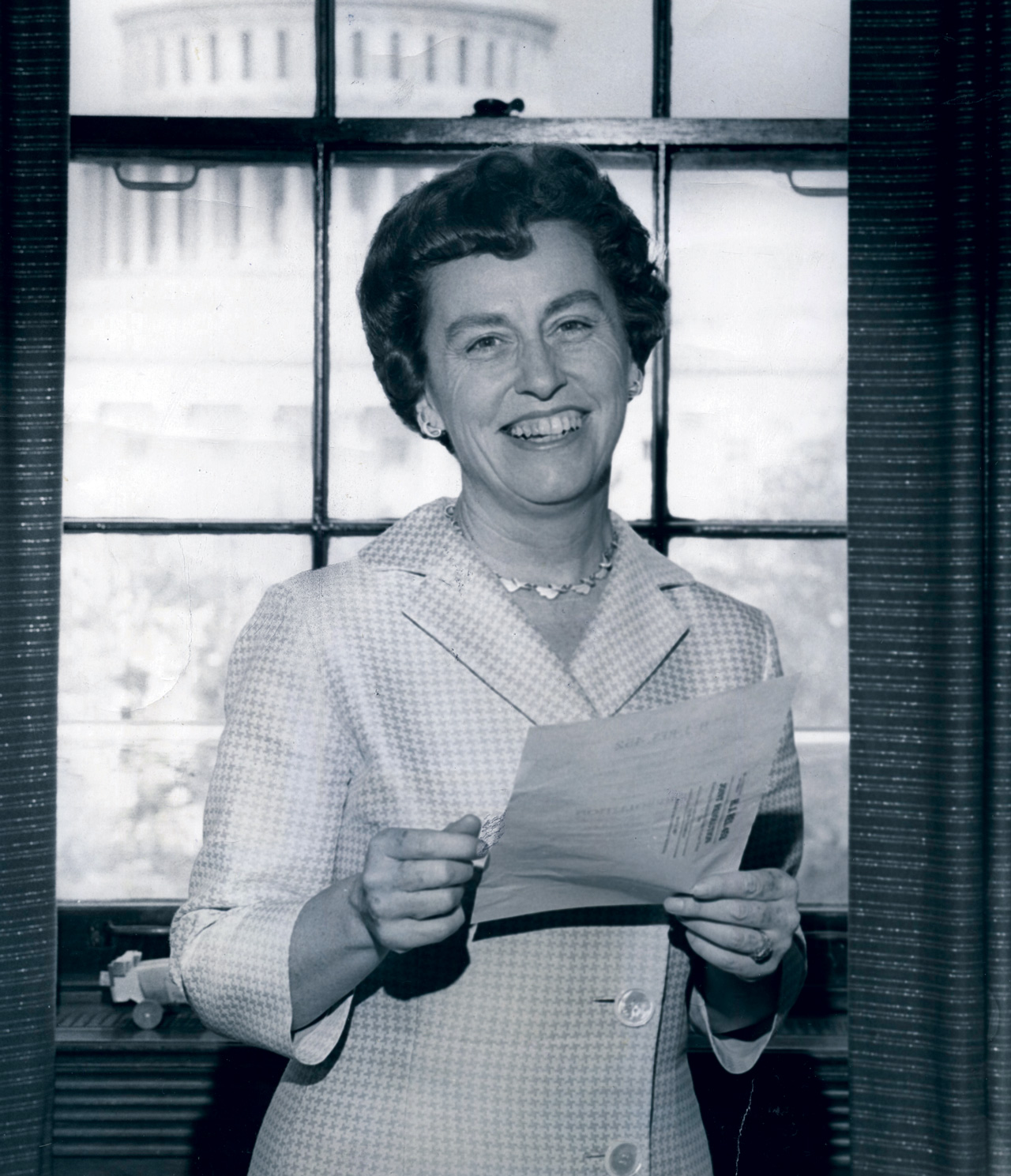 On Aug. 10, 1970, Rep. Martha Wright Griffiths stepped onto the floor of the U.S. House of Representatives looking to pick a fight. She had just spent more than a month chasing resistant congressmen up and down the halls of the Capitol, collecting the 218 signatures necessary to move the Equal Rights Amendment (ERA) out of committee and into the House for debate. The measure would ensure equal treatment under the law for Americans regardless of gender. She knew that this was just the latest campaign in a war that had been raging for centuries. “Mr. Speaker,” she said, addressing the entire chamber, “this is not a battle between the sexes, nor a battle between this body and women. This is a battle with the Supreme Court of the United States.”

At stake was an amendment that would provide women the country’s clearest judicial standard and strongest legal defense against sex discrimination. Griffiths, BA ’34, had been preparing for this battle her entire life. When she graduated from high school in Pierce City, Missouri, in 1930, her mother feared that, without further education, her daughter would forever be dependent on whoever would be her husband. So, her mother worked extra odd jobs to save for Griffiths’ tuition to Mizzou. There, Griffiths earned a bachelor’s degree in political science. She also met and married Hicks G. Griffiths, a fellow aspiring law student. He had been accepted to Harvard Law, but because the Ivy League law school didn’t admit women, the couple opted for the University of Michigan Law School.

Hicks would go on to become Michigan Democratic Party chairman, but he put most of his support behind his wife, encouraging her to run for public office. She lost her first bid for a seat in the state House of Representatives in 1946 but came back to win two years later, launching a career in public service that would span six decades. “She was unafraid of politics,” says Peverill Squire, political scientist and Hicks and Martha Griffiths Chair in American Political Institutions at Mizzou. “She was willing to put herself out there at a time when it was not easy to do that for a woman. She was running at a time when few women ran for office. They didn’t have much in the way of encouragement to run, and you really had to believe in yourself.”

Confidence was not something Griffiths lacked, at least not outwardly. She lost another election in 1952, this time for Detroit’s seat in the U.S. Congress. Two years later, she again avenged the loss, becoming only the second woman from Michigan ever elected to the House. Over the next 20 years, Griffiths made a name for herself as a straight-talking firebrand who stood up to male colleagues. In 1962, she became the first woman ever appointed to the powerful Ways and Means Committee. She helped ensure protections for women were included in the landmark Civil Rights Act of 1964, and she never shrank from addressing gender discrimination. In one memorable incident, when a major airline fired a flight attendant on grounds that she was engaged to be married, Griffiths confronted the airline’s personnel manager about insisting that his “stewardess be young, attractive and single.” She drove the point home: “What are you running, an airline or a whorehouse?”

She is best known for her work on the ERA. Starting in 1923, a variation of the amendment had been introduced in every session, but it was always held up in committee where it died. In 1970, Griffiths filed a discharge petition, a little-known maneuver, which, when signed by the majority of House members, forced the proposal out of committee and onto the floor for debate. The House passed the ERA that year. The Senate approved a version of the amendment two years later, sending it to the states for ratification. But by the time the deadline expired, only 35 states had ratified the amendment — three shy of the three-fourths required to get it into the U.S. Constitution. A 38th state, Virginia, finally passed the amendment in early 2020 — a victory that, for the moment, is only symbolic.

By then, Griffiths had left Congress to spend time with family. In 1982, she became lieutenant governor of Michigan, a post she held for 10 years, before retiring. She died in 2003. “She was still fierce and fearsome,” says Julie Wilford-Gold, who worked for the Michigan Senate majority leader, across the hall from Griffiths’ office in the state Capitol. “We were all in awe and truly intimidated. She was in her mid- to later 60s, but she was still sharp as could be. We knew that she had been way ahead of her time.”

The Mizzou Alumni Association recognizes Martha Wright Griffiths as an inspiration and a role model.  In 2005, the Griffiths Leadership Society was established to connect an influential and dynamic group of women through mentorship and networking.  Members includes both students and alumnae, connected by their ties to Mizzou.  Learn more.

About the author: Tony Rehagen, BA, BJ ’01, has written for GQ and the Columbia Journalism Review.