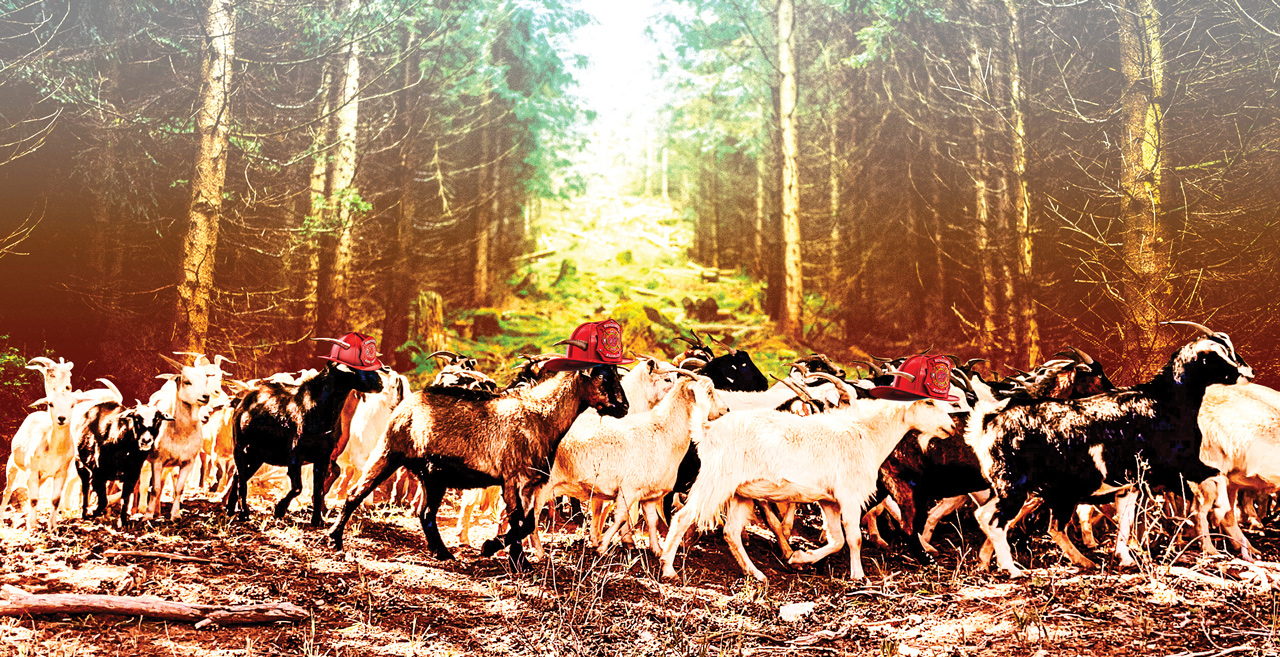 Forests in the American West face drought, high winds and wildfires. Missouri’s forests? We have humidity, the occasional tornado … and goats.

A pack of the fun-loving, ever-hungry nannies, kids and wethers takes to Missouri hills in a novel effort to manage the state’s forests, led by a team of Mizzou and U.S. Forest Service researchers. Temporary, solar-powered electric fencing pens off acres of woodland, allowing the goats to munch on unwanted trees and brush. After several “browsing events,” the preliminary data look encouraging, says Gina Beebe, MS ’21, who helped oversee the project as a graduate student in MU’s School of Natural Resources. “We’ve seen an increase of species richness and a decline in unwanted species,” she says.

The goats are an experiment toward better maintaining forests in Missouri, where managers at the Mark Twain National Forest are national leaders in restoring woodland diversity, says Michael Stambaugh, BSF ’96, MS ’01, PhD ’08, a forest ecology professor and Beebe’s graduate adviser. Much of the Mark Twain work relies on prescribed burns, the controlled fires that replicate a long history of blazes ignited by nature and indigenous people.

“The increase in plant diversity from prescribed fire has been tremendous,” Stambaugh says of the forest service’s work. The fires help open up woodlands, encouraging growth of the shortleaf pine that is native throughout the Eastern United States. In pine forests, more sunlight reaches the ground, supporting greater diversity in plants and animals. It can look like a grassland with scattered pine trees, he says. “It is amazing. You’ve probably not seen it unless you’ve been to the pine savannahs of Georgia or Florida.” That’s because Missouri, once home to more than 6 million acres of shortleaf pine, now has as little as a tenth left.

Stambaugh also advocates the use of prescribed burns in controlling Western wildfires. The managed blazes can reduce fuel that piles up in forests. Policy since the early 1900s sought to prevent all fires, leaving woods packed with combustible material.

Missouri has wildfires, too, but they tend to be lower in severity and significantly smaller in size than Western wildfires. The state’s rains and humidity, topography, and milder winds typically save forests from widespread destruction. But the climate change that has worsened fires in the West could threaten forests and woodlands here with periodic severe droughts, says Brian Davidson, natural resource specialist at Mark Twain. He notes that pine adapts better to changing climate than many Missouri hardwood species, such as northern red and scarlet oaks.

Intentional burning, of course, can spur opposition from nearby landowners and lumber companies. Mizzou’s Stambaugh sometimes conducts burns near his Central Missouri home to generate interest and conversation. And it’s in sensitive areas where goats might supplement prescribed fires, Beebe says. Those browsing events in her study occurred near a highway, where burning could be dangerous.

Several news stories have featured Beebe’s work with the goats, which are rented from a Missouri family with a large herd. Turns out they can give grazing a good name. “People love goats, no doubt,” she says. “Goats are playful. They’ll jump around and just be goofy, and people like that.”