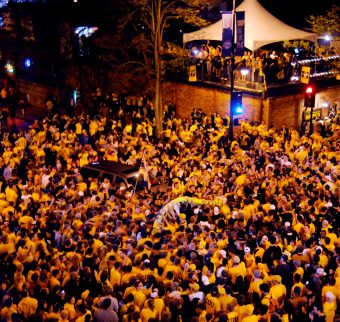 Fans carry the goal post from Memorial Stadium to Harpo's on October 23, 2010. Mizzou defeated No. 1 Oklahoma 36-27. Photo by LG Patterson.

Among the chunks of Faurot Field goalposts carried through campus post-victory by thousands of jubilant football fans chanting, “HAARP-OHHHHHS, HAAARP-OHHHHHS,” amid the sports memorabilia and alongside the other significant mementos, there’s a framed Missouri Alumnus magazine article with a picture of a youthful Dennis Harper, BS Ed ’71, that reports he’s recently opened a bar just north of campus and that, “If early accounts are any indication, it is well on the way to joining … student favorites.”

In 1971, when that article was published, Harper’s diploma still had the new-graduate smell, and even though he majored in education, his life education taught him to recognize a business opportunity. “I grew up in Iowa City, Iowa — home of the University of Iowa — and there were maybe a dozen ‘college bars’ there,” he explains. “I looked around Columbia and saw Romano’s and the Heidelberg, Booches, a couple more maybe. And Booches didn’t even let women in!” (Note: Booches was men only until 1976). “Opening a college bar was a no-brainer.”

So, mere months after graduating, Harper opened the new place and gave it the name others had given him, Harpo — his nickname in the Alpha Tau Omega fraternity. “I didn’t want to put my nickname on it, but everybody said it was catchy. So I did.” 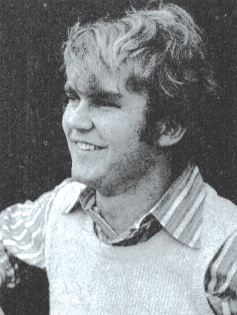 He filled his original location in the former Pizza Hut on South Seventh Street with Tiger black and gold, MU sports collectibles, and enough ephemer-rah-rah-rah to make it the most Mizzou spot in town that didn’t have six columns in the middle of it. Just a year later, Harpo’s moved to the larger, current location at 29 S. 10th St. “We became a trademark place to be seen. We caught on with sports.” Harper smiles when he says, “It’s what a college bar should be. We get businesspeople and tourists. Alumni come back because this is where they came when they were students, and they still feel that connection.”

When Chuck Naylor, BS BA ’82, was an undergraduate, “Harpo’s was the watering hole,” he says. Naylor was in the same fraternity Harper had been in and, because Harper was Harpo, “We looked up to Dennis. He was it.” The two remained friends through the years.

In 2010, Naylor was retiring from AT&T. His son Jack, BS ’14, then a Mizzou undergraduate and Harpo’s regular, heard an impossible rumor: After four decades, Dennis Harper was selling.

Naylor was skeptical. “I thought, there’s no way he’d ever sell Harpo’s.” But if the scuttlebutt proved true, Naylor wanted in. “We met over a beer on a game day,” Naylor recalls, “and Sara [Harper’s wife] walks in, and she goes, ‘Let’s just sell it to Chuck.’ That’s how it came down. It was kind of scary. I had to figure out how to run the place!”

Naylor knows the intangibles are still critical. “The magic formula is the great location, far enough away from campus but close enough, and that the staff is all fresh-faced college kids who want to work hard. We have people working for us whose parents worked for Dennis when they were students or whose parents used to party at Harpo’s.” Naylor says with pride, “The real secret sauce is that Harpo’s still exudes the college experience, and that creates the loyalty.” Indeed, it’s that powerful loyalty that inspires chanting football fans to schlep Faurot Field goalposts more than a mile to Harpo’s front door.

The framed Missouri Alumnus clipping that says the new bar called Harpo’s quickly became a “student favorite” ends with a bit of foreshadowing: “Someday, Harpo’s may evoke the same nostalgic sentiment in today’s [1971] students as such old favorites as The Stables, The Bengal Lair and The Dairy evoke in alumni.” A half-century later, all that remains of those other establishments are reminiscences. But Harpo’s still hums along in 2021, serving up another generation of nostalgic sentiment.