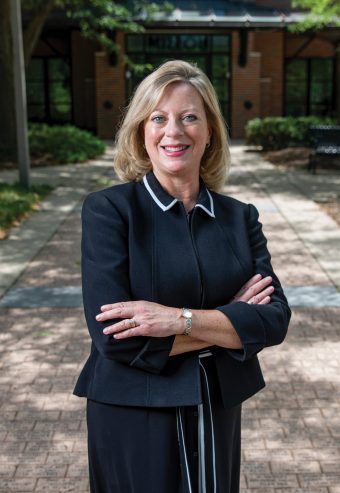 Sabrina McDonnell, MBA ’15, is a big fan of beginnings. Her favorite Mizzou tradition is Tiger Walk, where incoming students kick off their Mizzou education by walking through the Columns toward Jesse Hall. She likes the exhilaration of starting projects even more than the satisfaction of finishing them. She’s an early bird, not a night owl. So, as she enters the 2021–22 academic year as the Mizzou Alumni Association’s volunteer president, she looks forward to leading the board with what she terms “strategic intentionality.”

“Although it’s hard to let go of the things we’ve done many times before,” McDonnell says, “a real challenge to us as leaders is to ask, ‘Is this the best way to meet the needs of alumni right now and to prepare for alumni engagement opportunities in the future?’ and hold ourselves accountable to that. Finding ways to balance past successes and future possibilities are the kinds of strategic conversations the board will engage in this year.”

Being intentional and strategic are also skills fundamental to McDonnell’s day job as executive vice president and chief customer experience officer at Simmons Bank. Although she splits her time between the corporate office in Little Rock, Arkansas, and Columbia, where she previously worked at Landmark Bank, Mizzou will always be home. McDonnell grew up nearby in Auxvasse, Missouri, and her Mizzou story began in earnest when she met her husband, Eric, BS Ed ’82, M Ed ’86, an athletic trainer at the university. They are the parents of two adult children, whom they “raised on the Quad” while building decades of Mizzou memories.

In addition to those family connections, McDonnell is also drawn to service. She joined the alumni association board in 2016 in the wake of student protests when she felt many community members were running away or standing on the sidelines. “For me, there was no watching and waiting,” she says. Being part of Columbia’s business community, McDonnell recognizes the interdependence of town and gown. “The University of Missouri has a unique mission for the education of Missourians, and I believe the relationship between Mizzou and Columbia has never been more important. It really is now, for me, about making sure that this organization — this university that I love — is surrounded and supported by alumni advocates who stand ready to honor the past and act as change agents for our very bright future.”