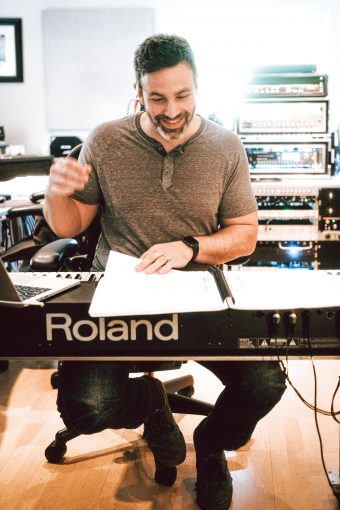 You don’t expect a composer to hang around dusty corrals in Reno, Nevada, while creating a film score, even one about horse trainers. But for Grant Fonda, who earned a master’s degree in music composition at Mizzou in 2012, immersion in a film’s location and personalities is his creative path.

For a new documentary about the University of Montana’s famed women’s basketball coach, he incorporated sounds of net swishes and shoe squeaks. In Pray: The Story of Patrick Peyton, Fonda’s captivating music surrounds the story of an Irish priest whose message, “The family that prays together, stays together,” was beamed to millions worldwide in the 1940s–’70s via rosary rallies and celebrity-studded TV and radio shows.

Hollywood generates most of Fonda’s commissions. He’s worked in the music departments of such films as Minions, Finding Dory and Bridge of Spies as well as fully creating the soundtracks for a dozen feature and documentary films. In addition to composing the score, he’s usually responsible for selecting an orchestrator, sound engineer and contractor for the musicians. He’s learned to tap into various directors’ styles.

Fonda was given a full ride to Mizzou under its New Music Initiative, which encourages composers. A perk of the program offers composers access to musicians. “Being able to have your pieces workshopped with phenomenal musicians at your disposal was such a gift,” Fonda says. “Mizzou put a lot of tools in my compositional tool belt.”

After working with Mizzou composition Professors W. Thomas McKenney and Stefan Freund and percussionist Julia Gaines, Fonda, now 36, returned to his native California. He gained admittance to the highly selective screen scoring program at the University of Southern California and to the American Society of Composers, Authors and Publishers’ film scoring workshop.

His music is found on Apple, Amazon and Spotify, including a song that’s been streamed 3.5 million times: “A Million In-N-Out Burgers,” part of a romantic comedy that’s meant to be watched exclusively on phones. “Music today requires a lot of versatility,” he laughs.

Listen on Amazon Prime to Fonda’s soundtrack of Pray: The Story of Patrick Peyton.