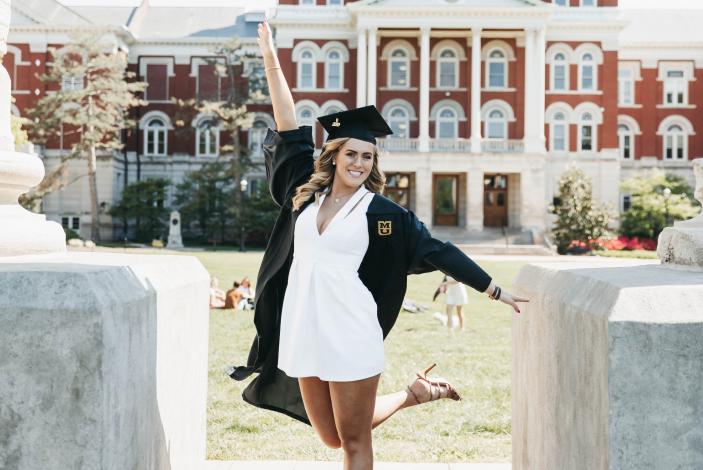 A week before the trip, Cummings was at Ellis Library cramming for a statistics exam, working on internship applications and researching prospective companies at the Trulaske College of Business Career Fair. But she was tired, and even a quadruple-shot Starbucks couldn’t energize her. “I wasn’t making any progress, so I decided to call it a night,” she said. As she was getting ready for bed, Cummings noticed a large lump on her neck. Her mom convinced her to go to the emergency room, and that’s where she discovered that she wasn’t just busy-college-student tired. She had a tumor on her chest that was stealing her body’s nutrients and making her feel extreme fatigue — and she wouldn't be going to New York.

“It was devastating,” Cummings said. “I think I was more upset about not going on the Tigers on Wall Street trip than I was being sick.”

One of the first people Cummings called was her mentor, Mary Beth Marrs, who directs the Cornell Leadership Program and coordinates the trip to Wall Street. “She comforted me and told me I’d go on the trip next year, which meant a lot,” Cummings said. “She gave me a positive outlook from the beginning. She gave me that gift.” 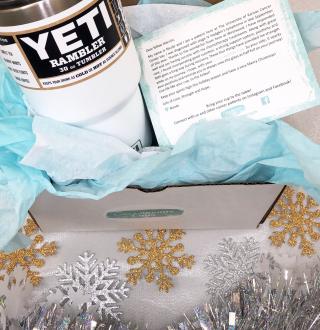 Cummings was soon diagnosed with stage 4 Hodgkin’s lymphoma — a cancer that had spread to her bones, chest, left hip and back. Despite her diagnosis, Cummings said she never identified as a cancer patient. Instead, she viewed her diagnosis as a problem to solve.

“I very much took it step by step,” Cummings said. “That’s how I really dealt with it — by being an active part of the solution.”

During her treatment, Cummings was gifted an aqua YETI tumbler to help her keep hydrated, flush toxins out of her body and reduce the side effects of chemo. “That YETI cup really became an integral part of my journey and one of the gifts I used the most,” Cummings said. “But more than anything, it was a constant reminder to smile and that I wasn’t alone on my journey.”

Cummings wondered if she could share the gift of a positive mindset to others receiving chemotherapy. From the chemo chair, she created CUREageous Cups — an effort that has already given more than 3,000 tumblers to new cancer patients as they begin chemotherapy.

Another Tiger on Wall Street

Cummings completed her chemo treatments and has since been in remission. She returned to Mizzou in fall 2019, and made her long-awaited trip to New York through Tigers on Wall Street. That’s where she met Thomas Pologruto, chief data architect and chief technology officer of liquid markets and data science at Blackstone.

Through this connection, she was able to become a summer analyst on Pologruto’s team, and after graduating in December 2020, she joined Blackstone full time.

“Tigers on Wall Street was a one-of-a-kind experience that really set me up for my future successes and the career that I have today,” Cummings said. “To be one of the first graduates to work at Blackstone from Mizzou — not only have I achieved my goals and more, but I’m so lucky to be where I am today.”