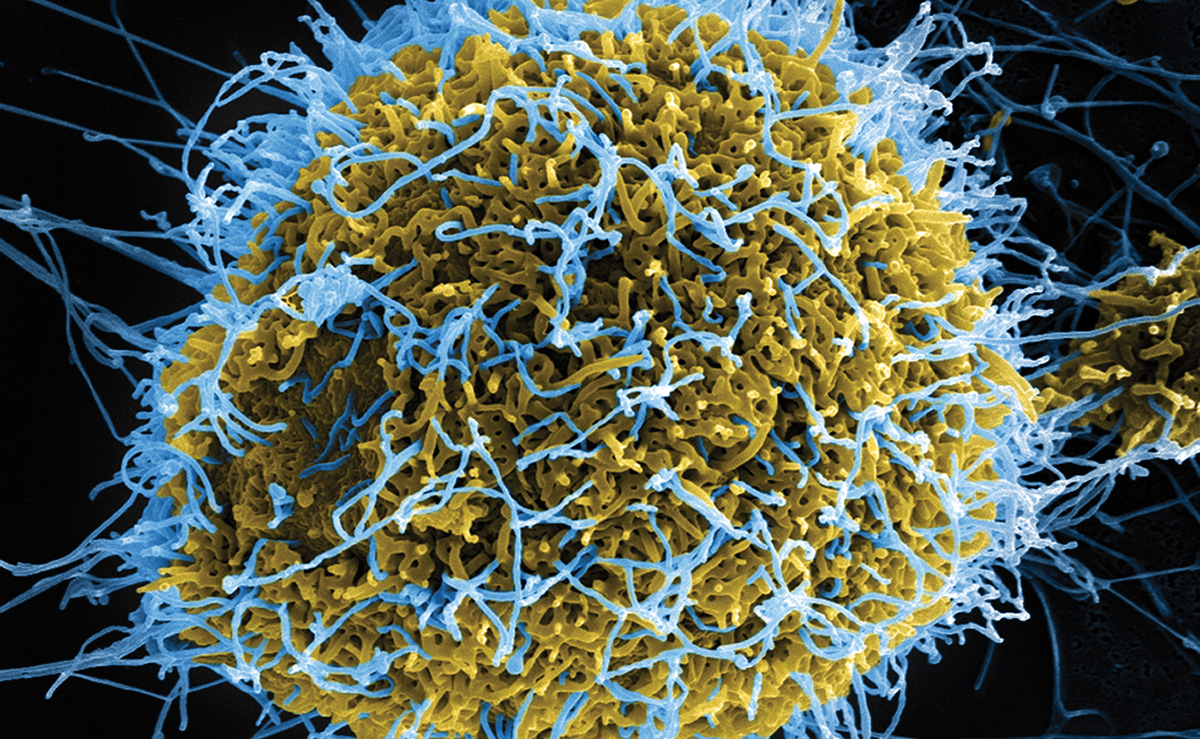 This eerie image is, in fact, something scary — an infected, greenish-colored cell spewing the virus that causes Ebola, a deadly disease usually found in Sub-Saharan Africa. An electron microscope (EM) captured the image, initially as a series of flat, grayscale photos. Accelerating computing power enables scientists to enhance those EM photographs, assembling them into images with three-dimensional depth and color to distinguish elements in and around cells and even the individual atoms that make up molecules. The ability to see such biological detail helps scientists design medicines and vaccines, including those being used to fight the COVID-19 pandemic. Elizabeth Fischer, National Institute of Allergy and Infectious Disease (NIAID)

A revolution is coming to Mizzou. Instead of a rabble, it’s genteel scientists inciting this upheaval, which comes in the form of large, shiny instruments that can peer deep inside bodies, individual cells and even molecules — all in remarkable detail. One machine so huge that a crane must lift it into the basement of the NextGen Precision Health building that’s taking shape near University Hospital. Another that stands 8 feet tall to project electron beams into tiny, cryogenically frozen specimens. Instruments so advanced that their pending arrival seems to somewhat awe even the researchers who helped arrange for them. “It’s amazing, high-end radiology imaging that we’ll be able to do here at Mizzou,” says Talissa Altes, a physician and MU’s chair of radiology.

Funded partly by donations, the imaging initiative builds — as does NextGen itself — on Mizzou’s strengths across campus, including in health care research, notably its combination of medical school, veterinary college and research reactor. The new gear also helps attract the scientists, doctors and students needed to make NextGen a success.

The timely acquisitions will push the university’s four campuses to the forefront of what’s widely called a “resolution revolution” in scientific imaging. Computing power has accelerated alongside imaging hardware to produce detail that was impossible just a few years ago. “It’s kind of a perfect storm that’s come together for microscopes,” says Tommi White, director of MU’s Electron Microscopy Core Facility.

The NextGen building will house the university’s most powerful imaging technology, offering centralized “core” facilities for researchers and clinicians from across Missouri. The tools will enable tomorrow’s breakthroughs in medical, veterinary and materials research — and today’s treatment of diseases that might otherwise remain a mystery.

That giant machine to be deposited by crane into the basement, for example, is the most powerful magnetic resonance imaging (MRI) model available for clinical use. MU’s will be one of just a couple dozen available nationwide for patient care. It reveals detail previously unseeable, such as tiny brain lesions causing seizures or minute cartilage tears disabling a knee. “So often, it can help us understand why a patient isn’t responding to treatment as we would expect,” Altes says. Likewise, it can help determine which patients might be candidates for research into drugs, surgeries and other treatments.

Her field of radiology, of course, is all about seeing inside a body without having to open it up. The advances of MRI and similar technology have rendered unnecessary exploratory procedures where surgeons operated on patients to see what ailed them. 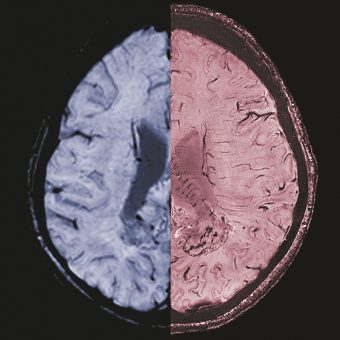 The MRI is a 7-Tesla model, which refers to the strength of its huge magnets that pack more than twice the power of more common 3T models. In addition to the 7T MRI, NextGen will get other high-end radiology gear as part of a $133 million, 10-year agreement with Siemens Healthineers, which officials described as its largest yet.

The novel arrangement includes a Siemens Healthineers scientist posted at the NextGen facility to aid Mizzou researchers and clinicians in improving the quality of images. Siemens then can build the improvements into its products, Altes says: “That means that our breakthroughs not only help our patients but can be quickly disseminated to patients worldwide.”

Much of the pricey equipment comes to Mizzou as part of the investment in NextGen. The new building at the heart of the institute will house investigators from many disciplines to break down the silos that have traditionally separated research in human health, veterinary medicine and biomechanical devices. Similarly, the linking of laboratories and clinics — both in the NextGen building and the neighboring University Hospital — should ease sharing between researchers and physicians treating patients.

NextGen will host the body scanning technology that is at one end of the imaging spectrum for seeing organs and tissue through gear such as the 7T MRI. It also will house the most powerful electronic microscopes that work at the other end of imaging for peering into cells, molecules and even atoms.

Electron microscopes are perhaps best known for their research into the structure of materials and bio elements, such as cell membranes and proteins. But the ability to see the structure of molecules also can lead to rapid health breakthroughs. Scientists elsewhere, for example, used electron microscopes and cryogenic — frozen — specimens to better understand the virus behind the COVID-19 pandemic, including proteins that it uses to attack human cells.

When it comes to human health, science often focuses on proteins, the molecules that carry out many functions in cells. New hardware, software and techniques that emerged around 2013 made possible an ongoing boom in protein description. Those sorts of life-sciences discoveries are “what cryo-EM is tailored for,” says White, of Mizzou’s electron microscopy lab. 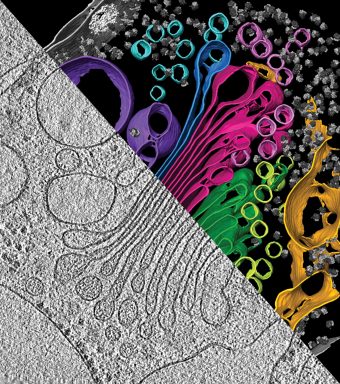 The grayscale image portion is just one of many captured of these interior structures of a cell. Specimens are cryogenically frozen, inserted into a Krios electron microscope like what is coming to MU and rotated to capture numerous, sometimes thousands, of pictures from many angles. Software then assembles and colorizes the photos to create 3D images that scientists can virtually “fly” around and through for detailed views of the cell’s structures and functioning. Benjamin D. Engel, Max Planck Institute of Biochemistry, Martinsried, Germany.

White will oversee new equipment at the NextGen facility that includes the Krios G4, widely considered the best electron microscope for life sciences. And while health care is NextGen’s focus, the EM core also will serve physicists and engineers with a Spectra 300 for subatomic imaging of materials. All the gear for the facility will come from Thermo Fisher Scientific, a Massachusetts company that is making a substantial in-kind donation to the university.

Meanwhile, a gift of $11 million, the single largest to the College of Veterinary Medicine, will pay for a slew of new imaging technology. The vet school already owns several scanning instruments used in animal research. The gift from 1954 Mizzou graduates Glenn and Nancy Linnerson will keep the vet school at the forefront of imaging in animal research and care, says Jeffrey Bryan, an MU veterinary professor and cancer researcher.

As in human medicine, the vet college relies a great deal on PET (positron emission tomography) and CT (computed tomography) scans to research and diagnose diseases in animals. The PET scans can detect abnormal biochemistry or physiology while CT scans show anatomic detail of organs and tissues.

As part of the gift, the vet college will get a standing CT scanner for larger animals. Other equipment is similar or identical to what’s used in human health. NextGen, in fact, will encourage overlap among human and animal researchers and clinicians. “Everybody will be talking, so we’ll be able to translate new discoveries to our patients faster,” Altes says.

Bryan personifies the NextGen model as he straddles animal and human health research. Among other examples, a trial underway on a human brain cancer relies on a treatment that Bryan helped develop for bone tumors in dogs. He also leads NextGen’s overall cancer research effort. 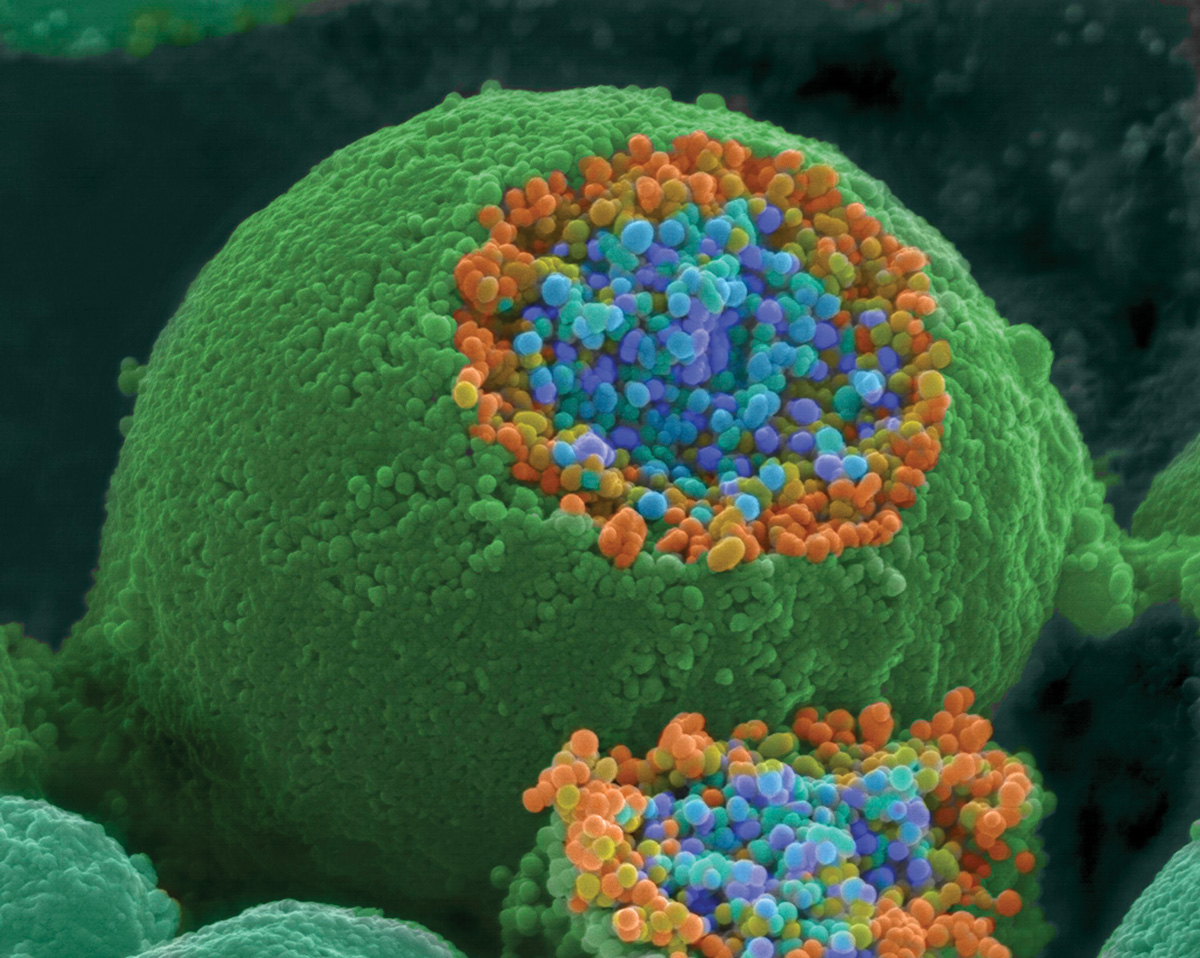 An electron microscope picture of a nerve ending that has been broken open to reveal vesicles (orange and blue). Fluid-filled sacs, the vesicles transmit messages through the nervous system. National Institutes of Health. 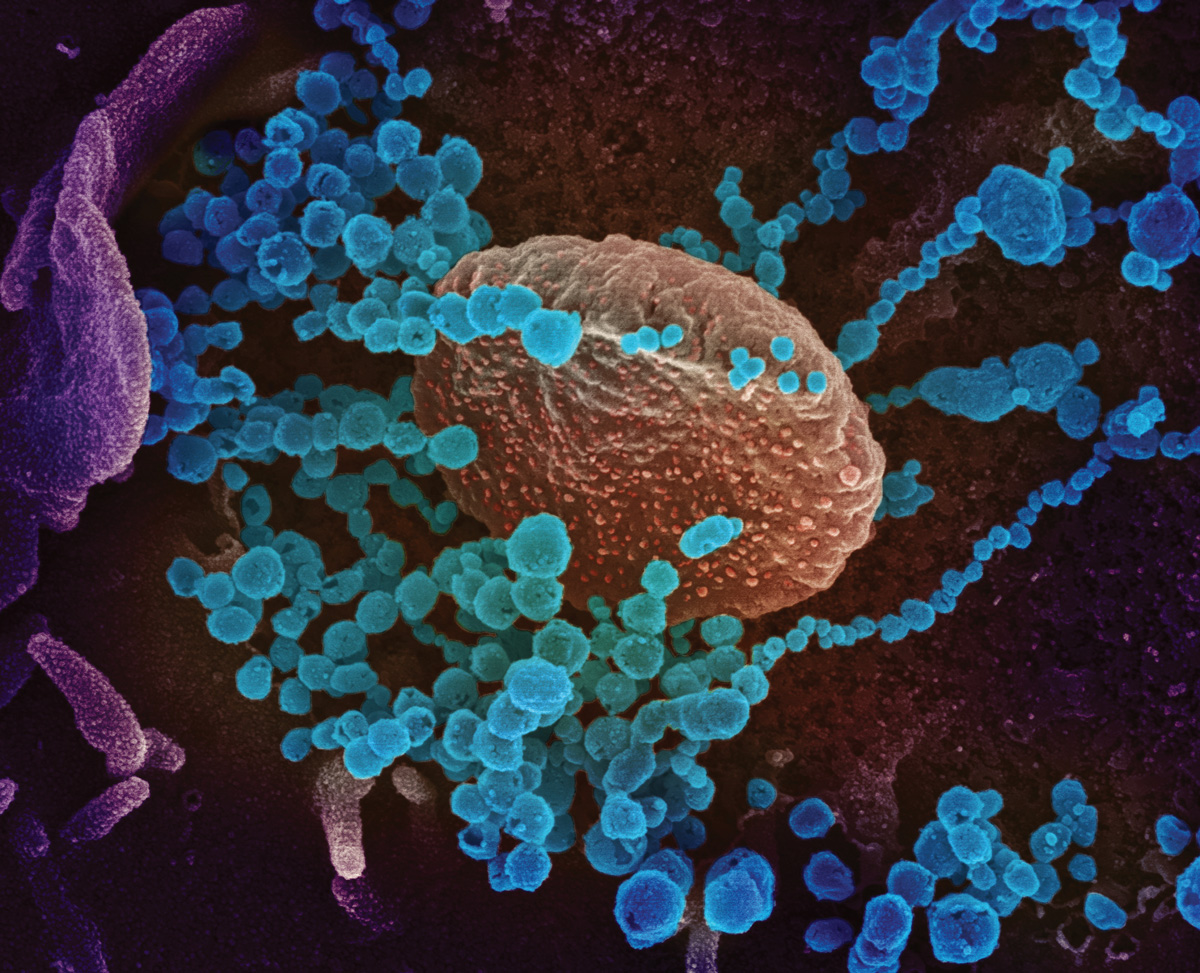 These microscopes can image the virus — the round, blue objects — that causes COVID-19 as it replicates and emerges from cells cultured in a laboratory. The virus wears a corona of “spike proteins” through which it invades human cells. National Institutes of Health. 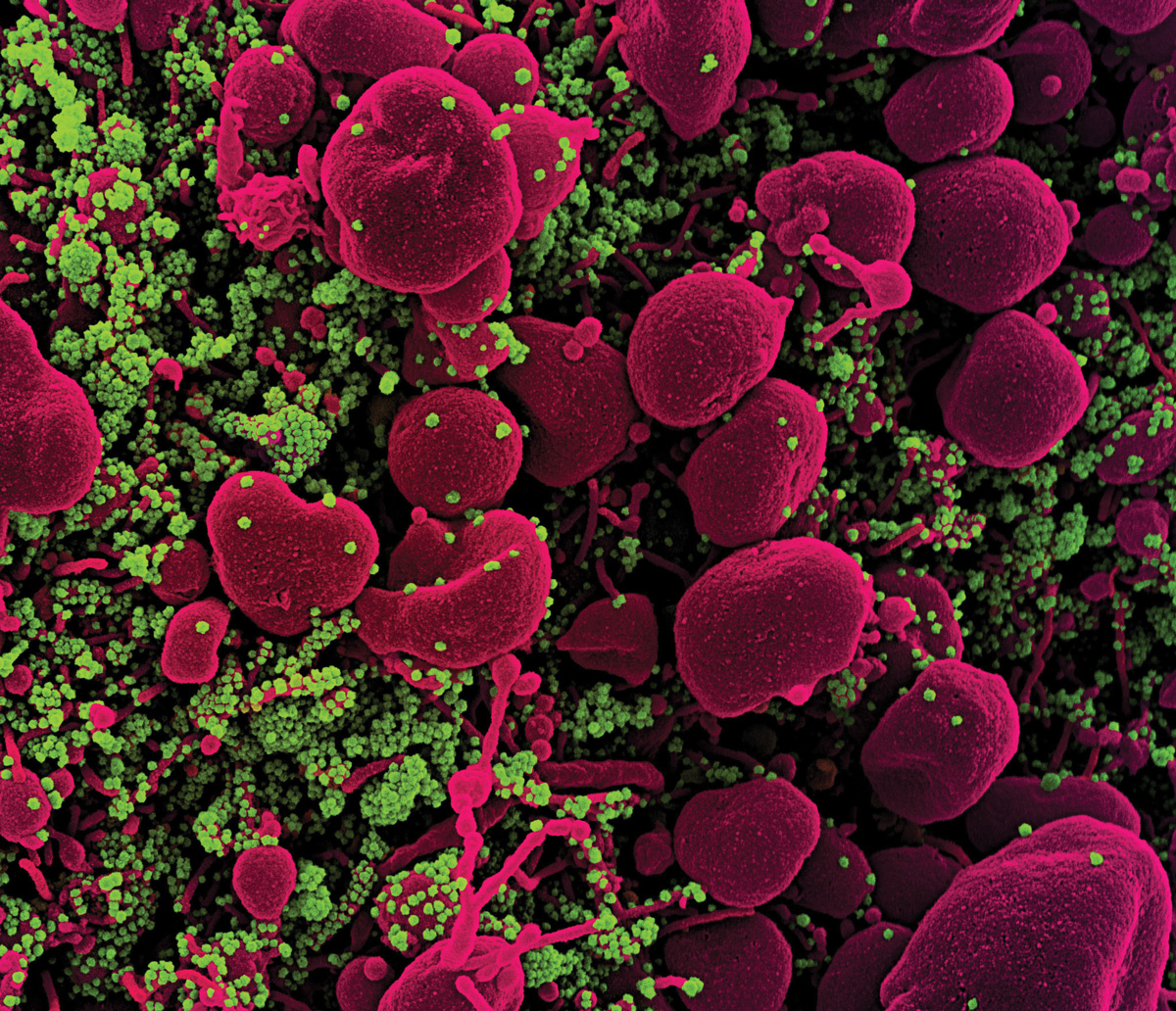 Coloring the virus (green) amid cells (red) helps to illustrate how aggressively COVID-19 can invade and reproduce in its human hosts. Scientists isolated these cells from a patient sample for study under an electron microscope. National Institutes of Health. 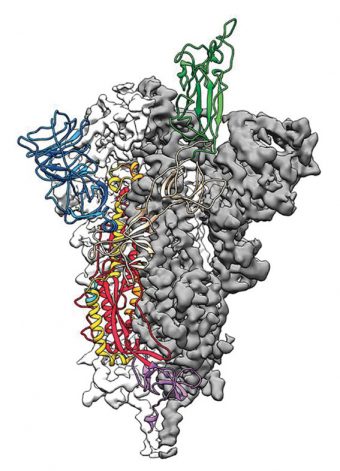 Magnification with the most-powerful microscopes (like Krios G4) enables scientists to model the individual molecules that make up the spike protein, a key step toward developing vaccines that can slow the virus’ spread. Jason McLellan, University of Texas at Austin

The veterinary imaging research will dovetail with work in theranostics, a field that combines medical therapeutics, or cures, with diagnostics. A new unit, the Molecular Imaging and Theranostics Center is directed by chemistry Professor Carolyn Anderson, an expert on using radioactive elements in medicine. The radiometals help imaging equipment to see what’s occurring in a body, which is the diagnostics piece, and can be directed to bind to and kill cancerous tumors, or therapeutics.

Anderson’s lab is getting its own PET and CT scanners, sized for rodents, which is where experimental radiopharmaceuticals often get their first test. Curing cancer in a human can be much more difficult than in a mouse, says the Simón-Ellebracht Chair in Medicinal Chemistry. That’s the advantage of access to other animal models at the vet college. “It’s a really great bridge to have,” she says, noting that many dog cancers resemble those in humans.

Another great link, she says, is to MU’s Research Reactor, a leading national source for the radioactive materials used in medicines and medical research. Not only is MU unusual for having a reactor, the most powerful research reactor at any U.S. university, but it was also built to be unique among reactors, says David Robertson, its director. Its design gives it a “bright,” or intense, source of the neutrons used to create the radioactive materials, called nuclides or isotopes. That allows the reactor to make small amounts of material intensely radioactive, and smaller is better when giving patients anything radioactive, he says.

Or to Anderson’s center, just across the street from the reactor. “My lab and all the university’s investigators can be the first to test the new radionuclides they’ll produce,” Anderson says.

So the new imaging gear magnifies the university’s unusual advantages in combined med, vet and reactor facilities. And it thrusts the university into a different league, says White, who directs electron microscopy. She came to Mizzou in 2012 after studies that included a stint at the National Institutes of Health (NIH). “Our microscopes here were good,” she says, but she’d had a glimpse of better when at NIH, with its earlier version of the high-res Krios electron microscope.

“When I came here, I would not have guessed we’d be getting instruments like these.”