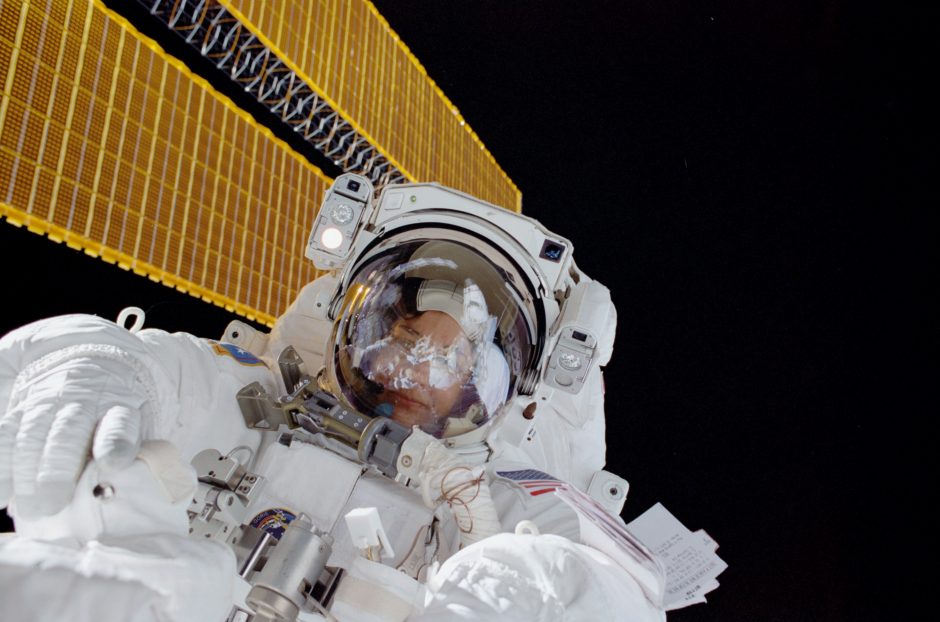 Linda Godwin during extra vehicular activity (spacewalk) during the STS-108 space shuttle mission. The shuttle is docked to the International Space Station; the ISS solar panels are seen in the background.

On May 5, 1961, Alan Shepard became the first American in space. At the time, Linda Godwin, a former NASA astronaut and professor emeritus of astronomy at the University of Missouri, was 8 years old. She still remembers her feeling of pride that came from this historical moment. A native of Jackson, Missouri, Godwin earned her master’s degree and doctorate from MU. It was during her time at Mizzou that Godwin received an opportunity to work at NASA. In 1985, Godwin was selected by NASA to be an astronaut candidate, and she became an astronaut in 1986.

Before retiring from NASA in 2010, Godwin’s career included more than 915 hours spent in space as part of the crew for four space flights — twice aboard each of the space shuttles Atlantis and Endeavour. Her duties in space included being the payload commander on STS-59. She also participated in two spacewalks, including the first six-hour spacewalk performed while docked to an orbiting space station, Mir.

Following her career at NASA, Godwin returned to MU as a professor in the College of Arts and Science. For eight years, Godwin brought her knowledge and experience, both from on and off Earth, to MU’s campus. Now, Godwin reflects on the impact of Shepard’s historic space flight, both in the turbulent atmosphere of the 1960s and in the modern age of privatized space exploration.

May 5, 2021, is the 60th anniversary of the first American astronaut, Alan Shepard, being in space. Are there any lingering effects we see in modern society?

Alan Shepard’s flight on May 5, 1961, and the first lunar landing eight years later, changed us from an Earth-bound society to one that explores space. Shepard was not the first human in space, but our path to landing Americans on the moon began with Shepard’s successful mission. Even today, this accomplishment still invokes a feeling of pride. Indeed, the whole world felt that pride. Many people still feel that this accomplishment demonstrates that we can do what whatever we put our minds to when we have the proper resources. During the turbulent times of the 1960s, these space missions and eventual landing on the moon stood as positive examples of what we can accomplish. 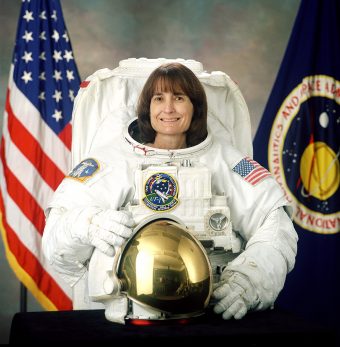 What does this event symbolize in American history? What is the relevance of this moment?

Before these early missions, people spent their entire lives somewhere on the surface of the Earth. But people had been dreaming of space exploration for centuries. We knew, in a way, how to achieve space flight ever since Isaac Newton wrote the laws of motion and gravity in the 1600s. However, manufacturing technology was not ready until the mid-20th century. Computers were still primitive, and large teams of people were required to make numerous calculations, checking each other’s numbers. This 15-minute suborbital flight — 116 miles high — safely launching and returning to Earth, was a major triumph for NASA, and Alan Shepard became an American hero.

There have been many debates on the pros and cons of space exploration. Why do you think it is important we continue our research and exploration of space?

There are several lines of thought. One is that we want to stay competitive with other major space programs and agencies. Politics have always driven space exploration, and there is no doubt that the space race with the Soviet Union was a major impetus for the Apollo program to the moon. 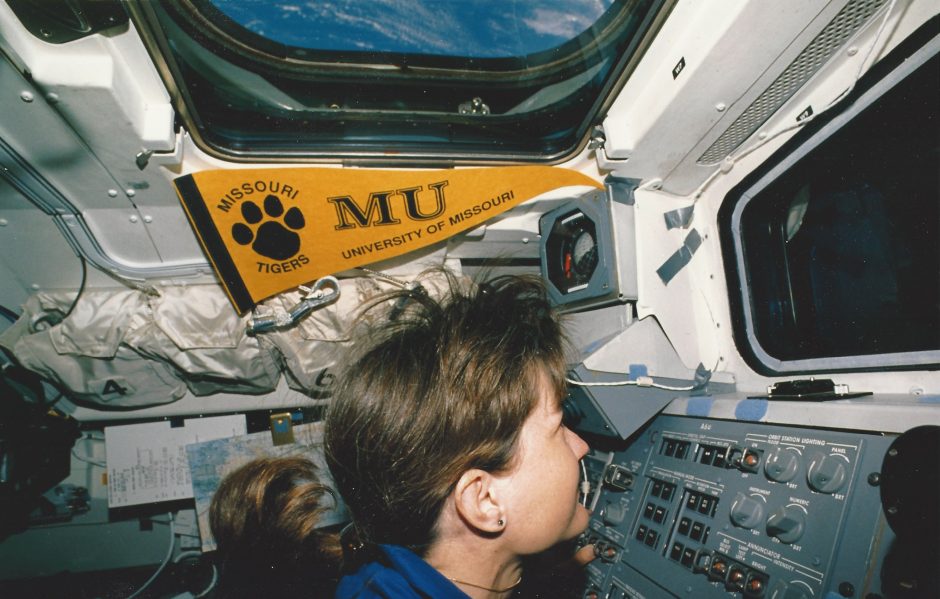 Godwin carried an MU banner to space, seen here displayed on the space shuttle aft flight deck. Earth is visible in the background though the overhead window. Courtesy of Linda Godwin.

Another reason for going to space is the microgravity environment, created by a free-fall orbit around Earth, which allows for science and processing that cannot be done in a 1-g environment. Exploring the changes in our human physiology also provides new information about what is happening to our human bodies.

Lastly, we love explorers, and we like to explore. This is done not only with people, as humans have yet to venture very far from our planet, but also with robotic eyes and ears that move through the solar system collecting data on our sun and the planets. But I’m eager to see humans back on the moon, and I am anticipating that eventually humans will get to travel to Mars. Someday a human on Mars will look back on Earth as a small dot in their sky, and that will be the start of another era in our human history. 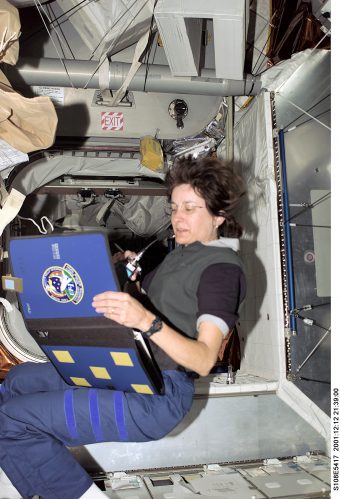 Godwin checks the master list inside the Multipurpose Logistics Module while docked to the International Space Station during the STS-108 space shuttle mission. Courtesy of Linda Godwin.

It is not easy to execute any of these missions. Getting off the surface of Earth and returning is

difficult. The launch, orbit and entry mission phases will always carry an amount of risk. Mitigating risk will continue to require compromises between testing and checkout, schedule and budget. NASA has to deal with this but does not have to answer to investors or make a profit. The commercial private sector has to satisfy investors and make a profit as well as meet schedule and budget. We have seen in the last few years that this is possible with private industry, and I am optimistic that we will see more and more private space missions.

I hope that more private citizens have an opportunity to go into space. So far, it is very expensive to buy a seat to orbit. For the foreseeable future, anyone in the general public will have to be at least a multi-millionaire to have a chance to launch into Earth’s orbit.

To arrange an interview with Linda Godwin, please contact Eric Stann with the MU News Bureau at 573-882-3346 or StannE@missouri.edu. 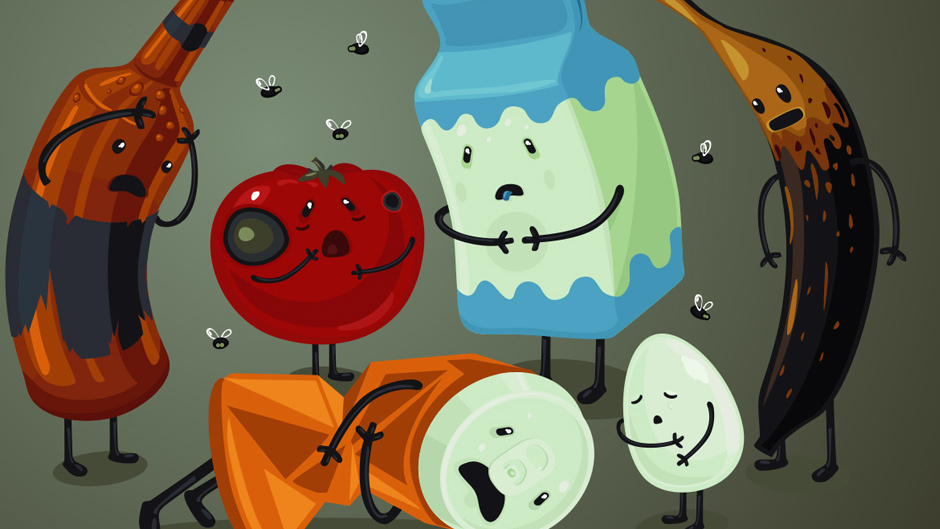 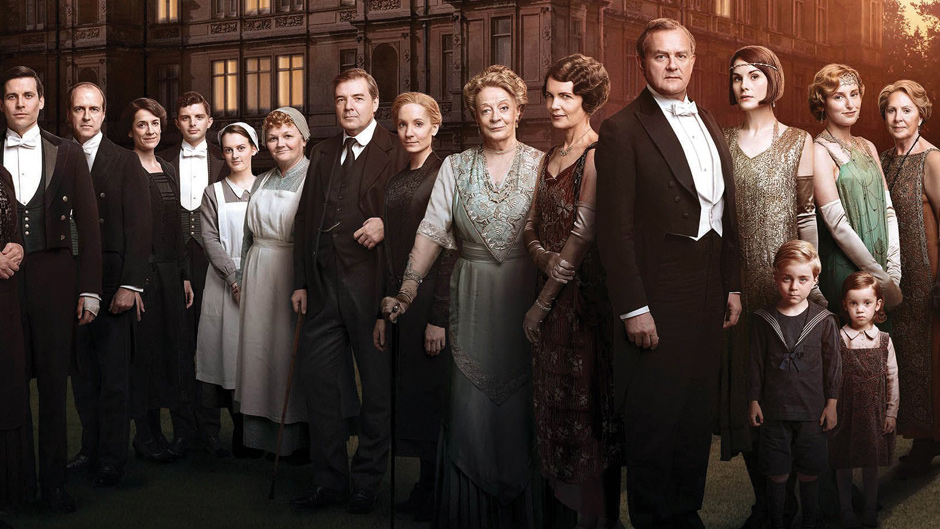