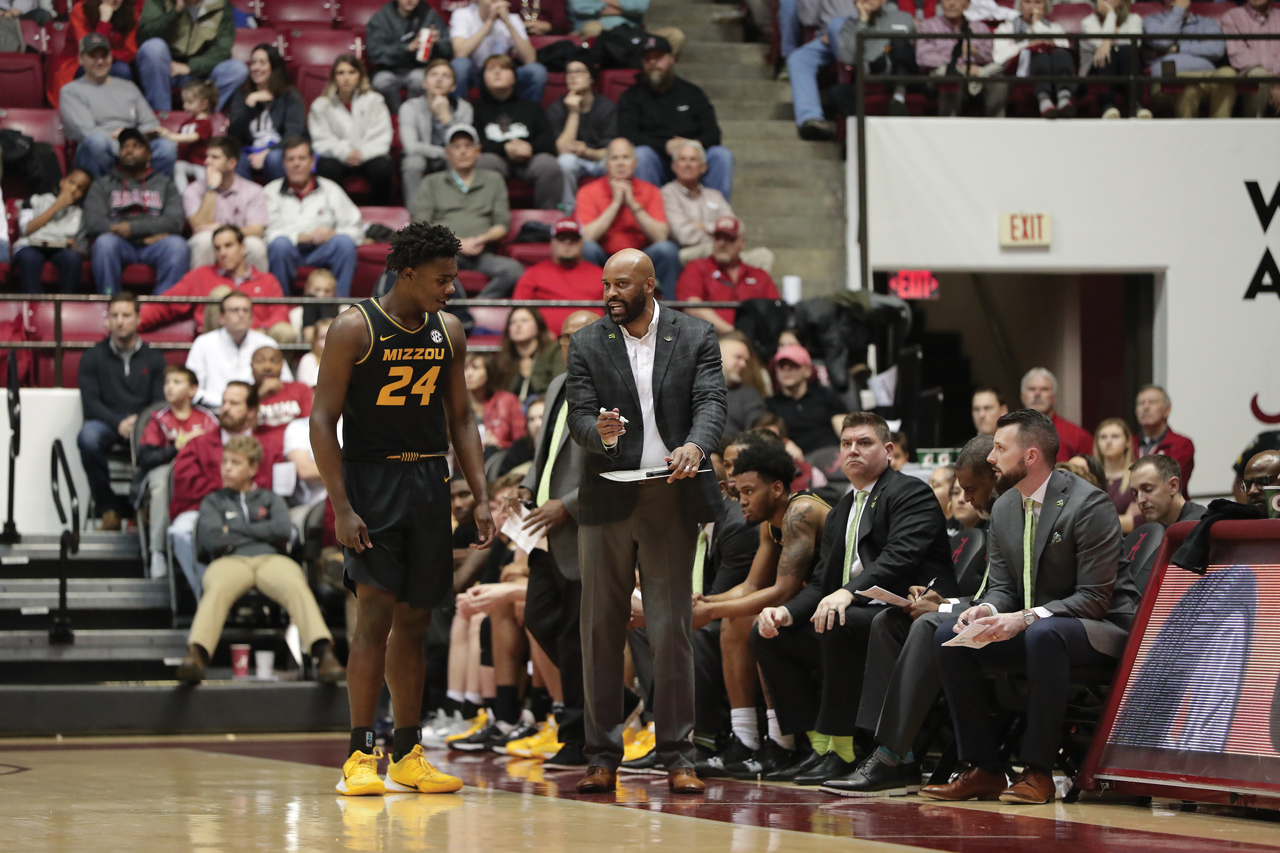 Coach Cuonzo Martin talks to junior forward Kobe Brown, one of three returning players from last year’s roster and the only starter who came back. Photo courtesy Mizzou Athletics

When Tiger basketball Coach Cuonzo Martin played basketball at Purdue in the 1990s, the idea of transferring to a different school never occurred to him. But as a coach, he can’t afford to ignore the NCAA’s transfer portal — the digital database of players seeking a change of scenery. It’s a revolving door that can both deplete and replenish his roster.

In April 2021, the NCAA adopted a rule allowing all athletes to transfer once in their college careers without having to sit out a year. More than 1,500 men’s basketball players, including five Missouri Tigers, flooded the portal. To rebuild, Martin signed four transfers — junior guard Amari Davis from University of Green Bay, junior guard Jarron Coleman from Ball State, junior guard DaJuan Gordon from Kansas State and sophomore guard Ronnie DeGray from UMass — to complement four incoming freshmen.

“We wanted it to be a mixture of transfers and high school guys,” Martin says. “If you bring seven or eight freshmen in your program, there’s a pretty good chance three or four of those guys will leave. The good thing about the transfer portal is you have good guys at different experience levels who you know can play college basketball.”

Since 2015, about 40% of men’s basketball players who have joined Division I programs out of high school have transferred by the end of their sophomore years, according to NCAA data. Some coaches believe it’s no longer worth the trouble to recruit high school players, particularly those who need a year or two to develop, because so many leave and spend their most productive years elsewhere.

Martin, who supports the new transfer rule, doesn’t buy the argument that college basketball will become a fantasy league in which coaches draft a whole new roster each April. He still believes in recruiting in high school players if they are good enough to contribute as freshmen or realistic enough to understand they need time to improve. When perusing the portal, he does his homework to find players focused on more than individual goals.

“You’re asking more questions than you’ve asked before of the people around the prospect,” Martin says. “What type of person is he? How does he react when times get tough? Of course you want talented athletes, but we want to make sure we get quality guys who the people around them and their coaches could really vouch for regarding their character and their willingness to be part of a team.”