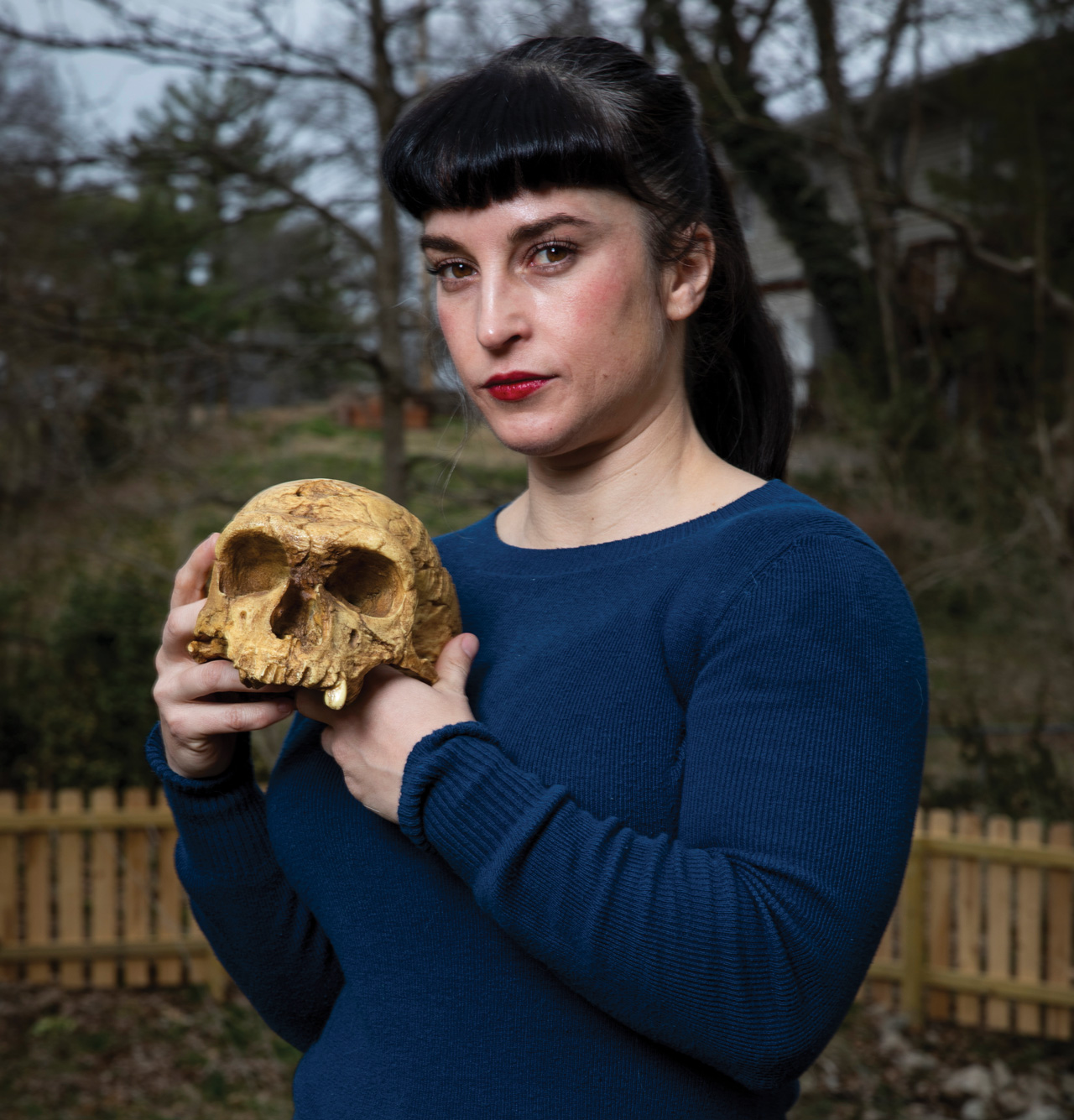 What was life like for the Neanderthal named La Chapelle-aux-Saint, aka the Old Man of La Chapelle? Through hands-on exercises such as fashioning Stone-Age tools, anthropology Associate Professor Libby Cowgill gives her students a window into the Old Man’s prehistoric day to day.

It’s a gray March day in Columbia, and Libby Cowgill has convened her upper-level biological anthropology class on Francis Quadrangle, just outside of Swallow Hall, to learn how to break rocks. On the syllabus, the lesson is about “knapping,” the Stone Age technique of chipping flint, chert or obsidian into primitive blades. But first, Cowgill has to break up three small bowling balls of mail-order chert into workable pieces for her 12 pupils. To do so, the professor is employing a technique that may seem crude even to the Neanderthals and early sapiens her students are trying to emulate. “Would you please stand back,” she says. “I’m going to smash this on the ground.”

Cowgill lifts a chunk of chert over her head, her olive green sweater doing little to conceal the powerful arms and shoulders of a lifelong weightlifter, and she slams it on the sidewalk. The clap of rock on concrete echoes across the empty quad causing the students to cringe. But when the commotion settles, the stone is unscathed. Cowgill resets, channeling a prehistoric frustration as she again spikes the chert, but to no avail. After the third useless thud, the students’ shock has shifted to bemusement.

Resigned, Cowgill places the boulder on the bench and climbs the stairs back into Swallow Hall to borrow a bucket of better-broken chert from a colleague. She returns and distributes the rocks to her class — now seated out on stairs, benches and sidewalks — along with work gloves and protective eyewear. There’s also a sheet of paper: “Sign your waivers saying that if you lose your finger, it’s not my problem,” Cowgill deadpans. 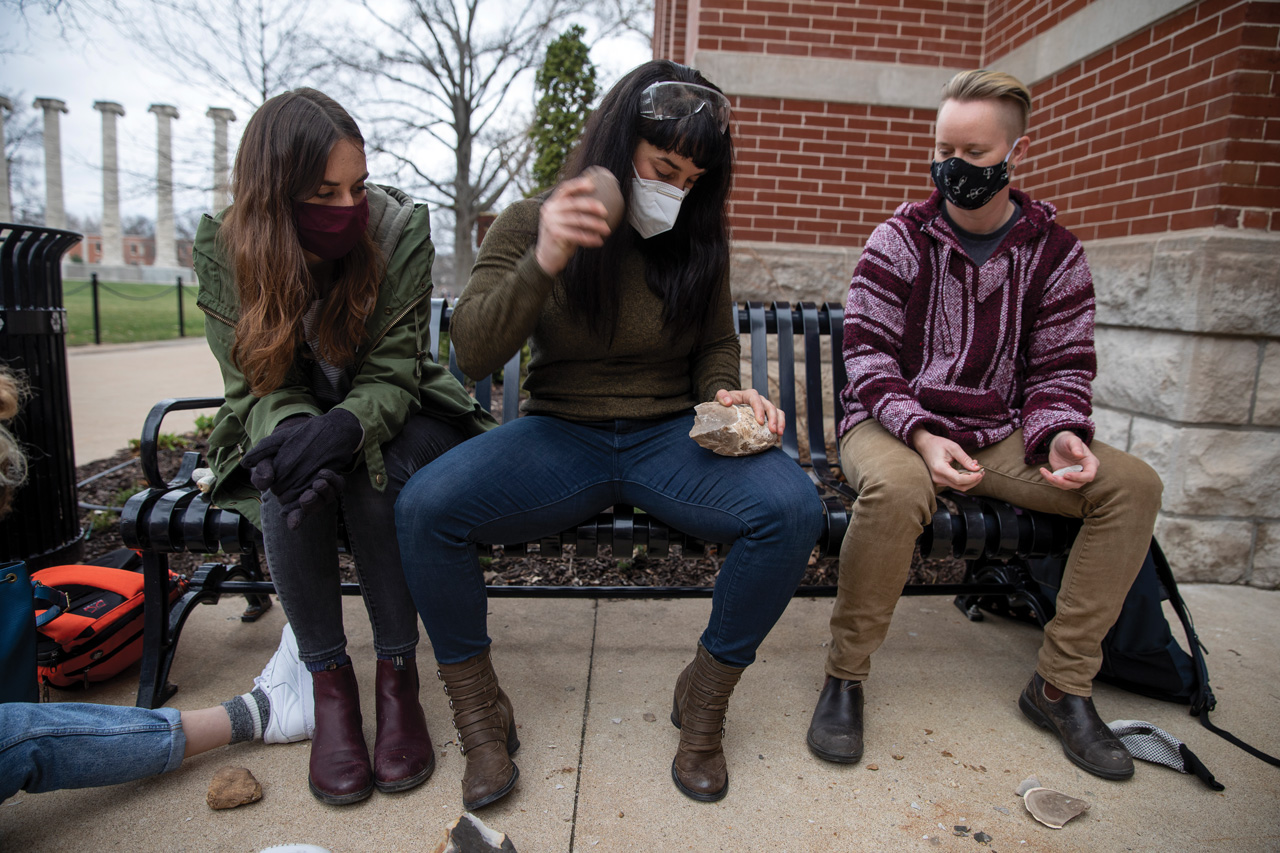 Cowgill’s techniques include teaching students to “knap” cutting tools by chipping flakes off of a chunk of chert.

With that bit of 21st-century legal liability out of the way, Cowgill’s class can rewind their minds about 2 million years. Under her instruction, each perches a chunk of chert on their lap and begins striking it, either with a rock or a bit of deer antler, trying to chip off flakes. The goal is to produce a chert flake large, strong and sharp enough to act as a knife, with which the students can separate meat from the bones of a dead animal in next week’s lesson. Cowgill calls it a Paleo Party. 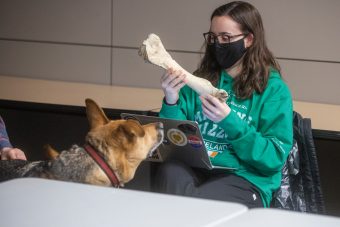 A show-and-tell lecture on taphonomy, the study of what happens to bones after an individual dies. This includes discerning cut marks from tooth marks left by carnivores like her canine TA, Luke.

Since her arrival at Mizzou in 2010, the associate professor of anthropology has become known for this type of immersion. Her students do more than read and write about prehistoric humans. Through tasks like knapping, using flakes to cut up animal carcasses and even hurling spears with an atlatl, students emulate their ancestors as a way of glimpsing the ancient world. “Anytime you’re looking at history in this class, you can relate to it,” says Christina Holzhauser, a first-year graduate student. “That makes it more personal.” Another student once referred to Cowgill’s teaching style as watching the Discovery Channel in person. Her enthusiasm and her creative methods of sharing that zeal are listed as reasons why Cowgill was among the five instructors who won a 2020 William T. Kemper Fellowship for Teaching Excellence, MU’s most prestigious teaching award.

“Having students disarticulate a chicken sounds like a weird thing to do,” says Cowgill. “But if you’re forced to do it and think how hard it would have been for a small-brained human ancestor to rush out onto an African landscape, manage to kill or scavenge something edible, and then have to eat it before predators arrived … I think butchering a chicken at my house is a weird window into that.”

But first, Cowgill must ensure that her students don’t butcher themselves while trying to fashion their stone tools. “Is anyone bleeding yet?” she jokes over the clamor of stone on stone. “In 10 years of doing this lab, I’ve never lost a finger.”

The source of Cowgill’s trademark approach to teaching might lie in her own unusual path to academia. She is a first-generation college student; her grandfather was a gymnast who did handstands atop skyscrapers for publicity photos in the 1930s, and her grandmother was a vaudeville performer.

Her parents, though not formal scientists, had a fascination with skeletal remains that bordered on obsession. Their home was lined with cabinets full of animal skulls, each carefully labeled with cards listing genus and species. Most of the specimens came out of the Southern California wilderness. Young Cowgill or her stepfather would spot a carcass while hiking, bring the body home, bury it to let nature continue its work, then exhume the skeleton and boil it down to clean bone. At age 9, Cowgill recalls, her stepfather asked her to stand watch on a San Diego beach while he sawed the head off a bloated dead sea lion with a 3-inch pocketknife. “You weren’t supposed to take things off the beach,” she says. “We put the head in a bag and snuck it home.” 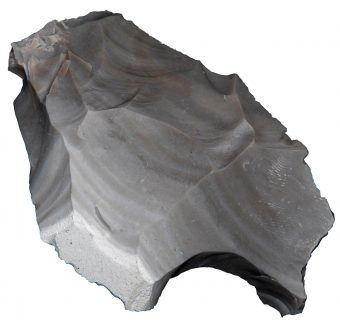 Looking back, Cowgill believes she was drawn to the bones because of their permanence. The rest of the body decomposes and fades away, but the skeleton endures. And, if you know where and how to look, there’s often a story imprinted on those skeletal remains. Her stepfather once bought a boar skull that had been painted white and had an arrow jammed through the cheekbone to make it look like a bow kill. He removed the arrow and stripped off the paint to reveal bullet holes — the true culprits in the animal’s death. He had solved a mystery by letting the dead tell its tale.

It’s no wonder that when Cowgill arrived at the University of California, Berkeley and took an introduction to anthropology class, it was love at first sight. It was a revelation to study with professionals who made careers doing what she and her parents had done as a peculiar hobby. “And since there was nobody in my life to tell me that becoming an anthropologist wasn’t the most viable career option,” she says, “I jumped off the edge of the bridge.”

From Berkeley, she leapt to graduate school at Washington University in St. Louis, where she studied with Erik Trinkaus, a renowned expert in Neanderthals. Her dissertation looked at differences in the growth and development of Neanderthals compared to modern humans. Searching for remains of immature Neanderthals, she dragged her own bodyweight in gear and X-ray equipment from museum to museum in cities all over Europe and the Middle East — perhaps why she chose weightlifting as a hobby. The physical nature of the job was never far from her mind, and she has always tried to instill that observation in her own students.

After a brief detour through Florida, Cowgill returned to Missouri in 2010 and joined the faculty at MU. Since then, she has become director of graduate studies for the anthropology department. PBS and Netflix have featured her work. In 2019, she was one of 15 University of Missouri System representatives named Presidential Engagement Fellows, enabling her to speak to research communities all over Missouri. She has also received the Provost’s Outstanding Junior Faculty Teaching Award. But Cowgill is still best known for building her one-of-a-kind curriculum. “Experiential learning is a common part of anthropology — but I’m not sure it’s typical for a teacher to have students disarticulate an animal and cook it afterward,” says cultural anthropology Professor Karthik Panchanathan, who has worked with Cowgill since 2012. “Most importantly, I think, she treats teaching like a craft, always trying to improve and inspire her students.” 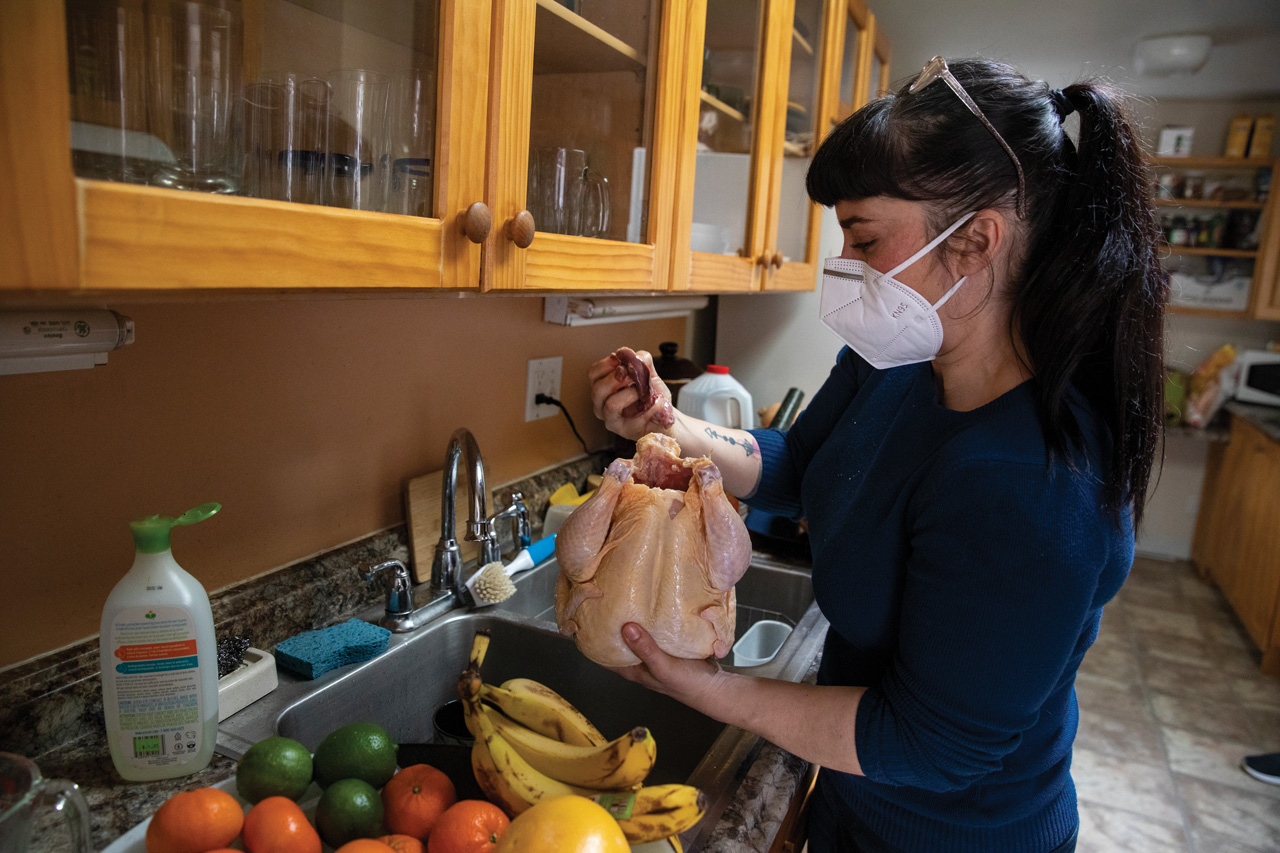 Cowgill’s home is undergoing renovation, so this year’s Paleo Party moved to Panchanathan’s house. And after appetizers of cooked beef marrow, spread on French bread with capers, shallots, salt, pepper and a parsley garnish (after all, they’re not Neanderthals), the class heads outside with their stone tools to do the deed at hand.

The backyard is spacious enough to allow for social distancing, though most of the masked students are keeping much more than 6 feet between themselves and the dead chicken on the patio table. It’s a standard supermarket bird sans head, feet and feathers. But cutting it up with a homemade rock knife is not going to be clean and easy. Two savvy grad students pounce and start hacking away at the legs. Another pair follows, each having a stab at a wing. Eventually, the scent of fowl attracts the attention of Zeus, Panchanathan’s German shepherd, whom Cowgill holds at bay. “Now you’re fighting off a menacing carnivore,” she says. “It’s trying to steal your meat.” 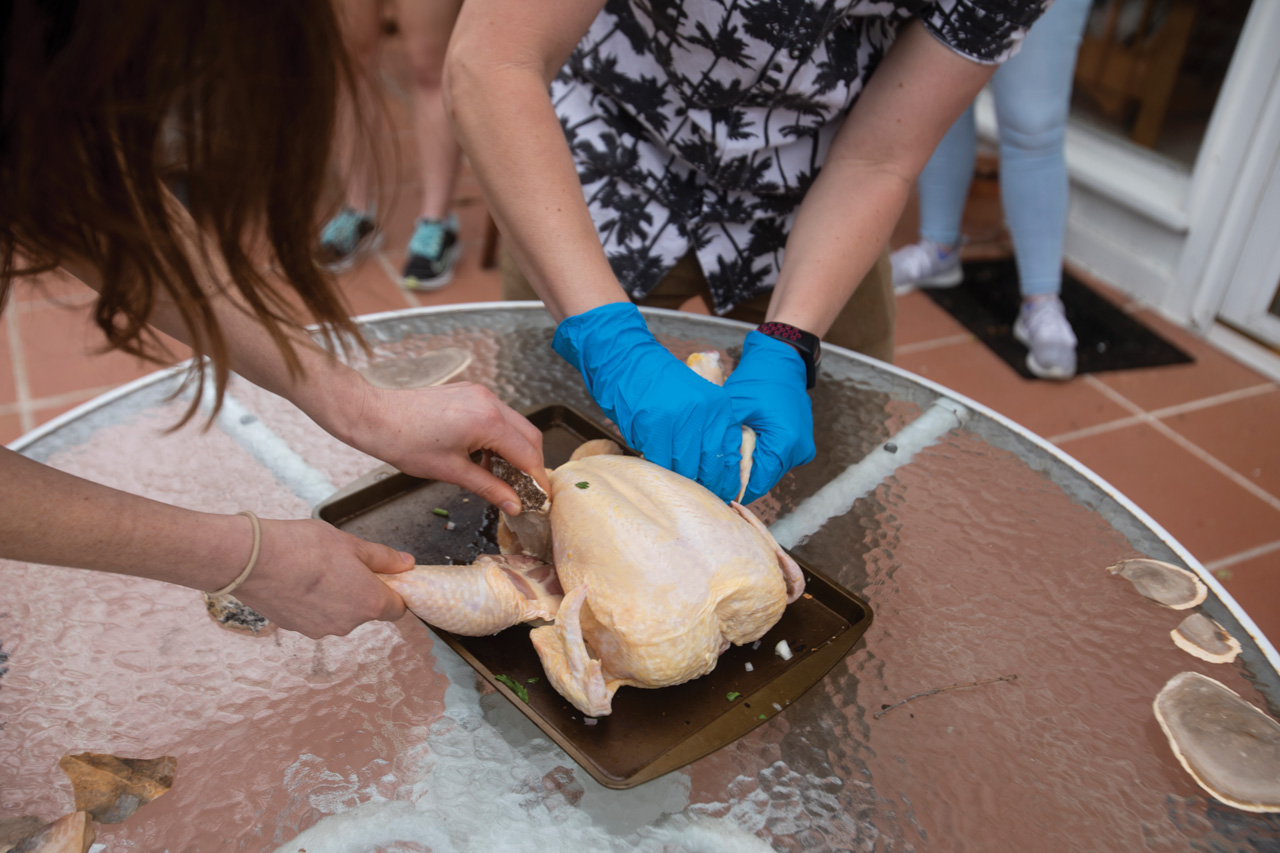 Students dismember a chicken with their stone tools.

Eventually, all that’s left is the thick, sinewy breast portion. Enter soft-spoken senior Hannah Walters. She grabs the chicken in one hand, her palm-sized flake in the other, and starts slicing at the bird. The crowd cheers her on. In a matter of minutes, she’s separated the breast, holding it aloft as her trophy. “This gives me a better understanding of how these tools were made and used,” Walters says afterward. “And it’s a lot more interesting to get your hands dirty.” 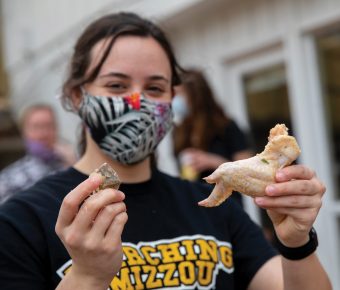 Once every student has had a turn, Cowgill takes the chicken back inside to cook it in the oven — no open fires. Besides, the two-hour lab is nearing its end, and by the time the bird is cooked, only Zeus will be left to eat it. Nevertheless, the class adjourns to enjoy snacks and revel in their accomplishments. Next month, they’ll face another test: Not a written exam, but rather a trip to the archery range where they will learn to throw a spear with an atlatl. It’s tough enough to make a stone knife to cut up an animal that is already dead. But what happens when survival depends on your ability to wield a deadly but somewhat clumsy weapon? By semester’s end, these students will know firsthand.

“I really try and engage that hands-on aspect in every way I can,” says Cowgill. “If I can take them to the archery range to watch all their darts going wild and transport them back to a time when people had to bring home a mammoth with that thing, it makes them ask different questions. How young did you have to start to learn to become proficient? How does one do this?”