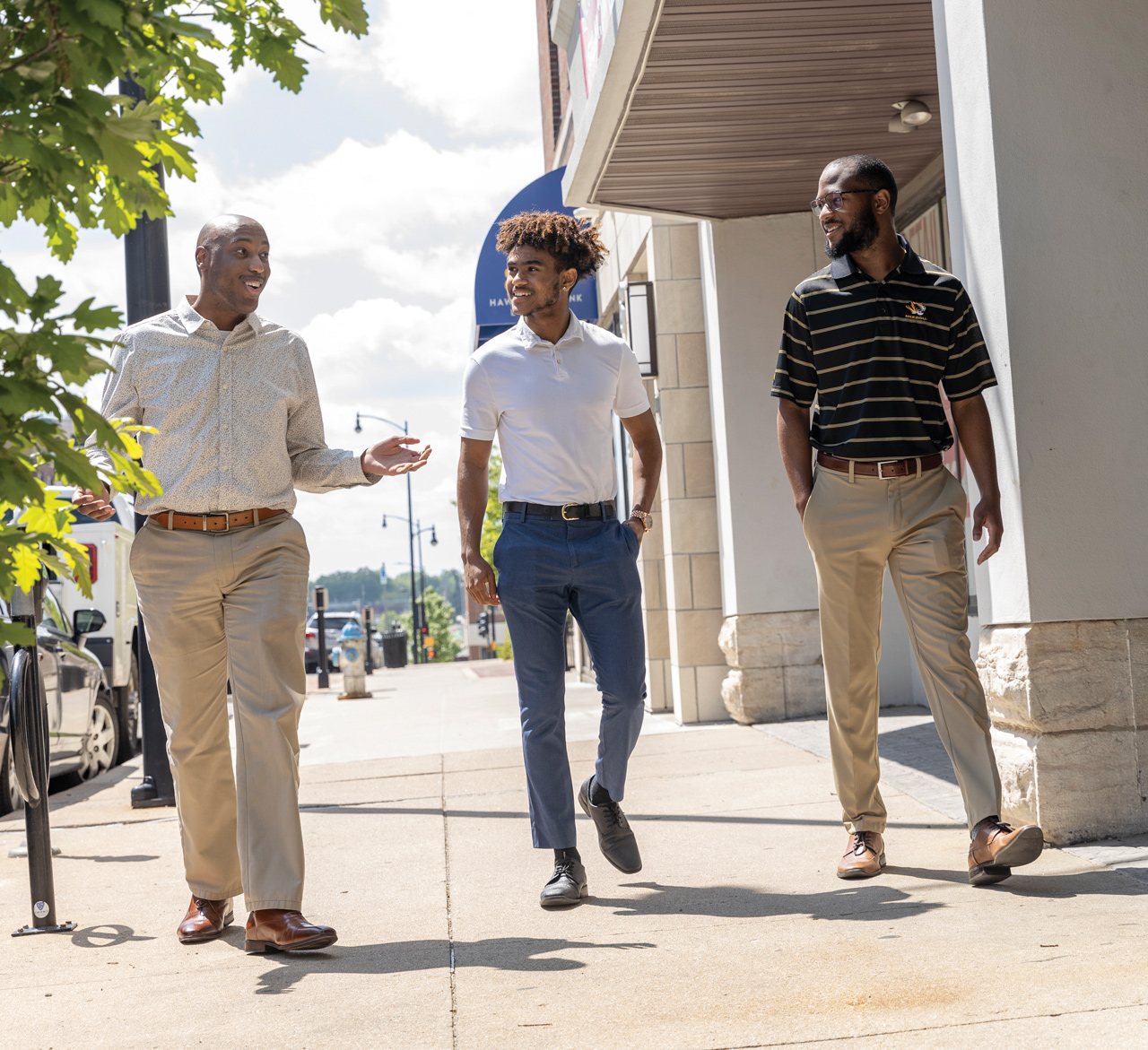 For the past decade, the Trulaske College of Business has sent a steady stream of graduates to work in New York City. Dean Ajay Vinzé wanted to know: What were those firms looking for? “They said it’s thought diversity,” he recalls. “Students from the Midwest have a different perspective. They bring robustness to their work ethic, and they ask questions that set them apart — that causes these high-performing firms to get even better.”

With an inaugural director of inclusion, diversity and equity, Erika Aaron, who started at Trulaske in May 2021 (See sidebar at right), the college is doubling down on its efforts to cultivate diversity. Vinzé takes an “end-to-end” view: “How can you provide the right exposure, experience and value-add so they can become the most engaging set of students that we get to the other side? I want to make sure we’re creating pathways into Mizzou and Trulaske through programs like Heartland Scholars Academy and Vasey Academy and setting up our students for success. When they come to campus, we’re giving them experiences like Camp Trulaske, Trulaske Excellence at Mizzou and others that make a big university feel manageable and integrate them into the academic environment. Then, at the back end, we have an outstanding career services unit to facilitate placement.”

Meet a pair of students whose transformational experiences flow through Trulaske diversity programs.

Abel Ambessie knows he likes soccer, the drums and Ethiopian food — but as a freshman, he wasn’t sure which track in the College of Business he wanted to pursue. He started in marketing, but it didn’t feel like the right fit.

Then he met Jean Whitley, BS Acc, M Acc ’17. Whitley, an assurance senior in the financial services office at EY in Kansas City, Missouri, is Ambessie’s corporate mentor through the Vasey Academy at Trulaske. Established in 1997 by Roger Vasey, BS BA ’58, and his wife, Sandy, the academy includes a one-credit course that provides talented students from underrepresented groups mentoring experiences, networking opportunities designed to jump-start their entry into the business world and a community to belong to. Once a week, Ambessie and Whitley would hop on a Zoom call, and the younger could ask the wiser about classes, career paths and leadership lessons. A graduate of the academy and a member of its advisory board, Whitley was eager to answer “some of those burning questions” that he had when he was a freshman.

Then Ambessie connected with his student mentor, Maurice Glass, a master’s student in the accounting program and a Vasey Academy graduate from O’Fallon, Illinois. The president of the National Association of Black Accountants (NABA) at MU, Glass invited Ambessie to the group’s next meeting. “Even if you are not interested in doing accounting, I said, we have a group of Black students that is really a good community to have in the College of Business,” Glass recalls. For Glass, the Vasey Academy was the first time he was in a small class with people who not only looked like him but could also relate to him. “Vasey is important because it provides you with a group of people that you can count on,” Glass says.

The Vasey experience provides participants with a $1,000 scholarship, seminars focused on current business trends, and opportunities to participate in corporate trips to Kansas City, St. Louis and Chicago. Although the Vasey Academy is currently a semester-long program, Director Mary Beth Marrs, BS IE ’87, MBA ’95, PhD ’99, says she hopes the relationships with corporate mentors continue: “I ask these people not to just mentor them; I say I want you to make a four-year investment in your mentees. I want you to open doors, make them aware of opportunities for internships or summits at your organization. These companies are getting great diverse talent — and they’re getting access to that talent at a very young age.”

For Ambessie, now a sophomore accounting major and a member of NABA, participating in Vasey was an investment in himself: “My senior year of high school, I just had so many questions about college. I didn’t know what to expect. I wasn’t really sure what I wanted to do or how I was going to get initiative. I was really questioning everything. Through Vasey, I got all those questions answered. I figured out what I wanted to do. I took my first step. I’m in the right place. I feel like I couldn’t have gotten that anywhere other than Vasey.”

Jesus Oropeza says he just got lucky, but hard work has a lot to do with it.

Growing up in Brookfield, Missouri, Oropeza’s childhood wasn’t always a happy one. He was bullied, sometimes violently. His mom worked hard at a factory and still struggled to make ends meet. After their house burned down, they were homeless for a time.

Oropeza had no intention of going to college. “I jokingly applied,” he says. “I thought there’s no way I’m getting in. So I said, you know, what’s the worst that can happen?”

He was making ramen noodles when his mom came in with the mail and handed him a large envelope from the University of Missouri. After opening the acceptance letter, Oropeza was confused — and then scared. How was he going to pay for school? A few weeks later, he got an email: Do you want a free laptop, a free suit and study abroad scholarships? “I thought it was a scam,” he recalls. “Turns out it was very real.”

Oropeza had been selected for the inaugural class of Trulaske’s Heartland Scholars Academy, which was established in 2018 with a donation from Sue, BS BA ’75, MBA ’77, and Irl Engelhardt. The academy annually gives 10 first-generation freshmen from rural Missouri and southern Illinois support to succeed in the business world through a variety of activities over four years. “The amount of luck was obscenely high,” Oropeza says.

Oropeza showed up to move-in day by himself — his mom had to work — and was greeted by a sea of families. “I’m like, alright, none of these people are like me. This is weird. I’m going to drop out,” he recalls. “But I had $13,000 in loans looking at my name.” 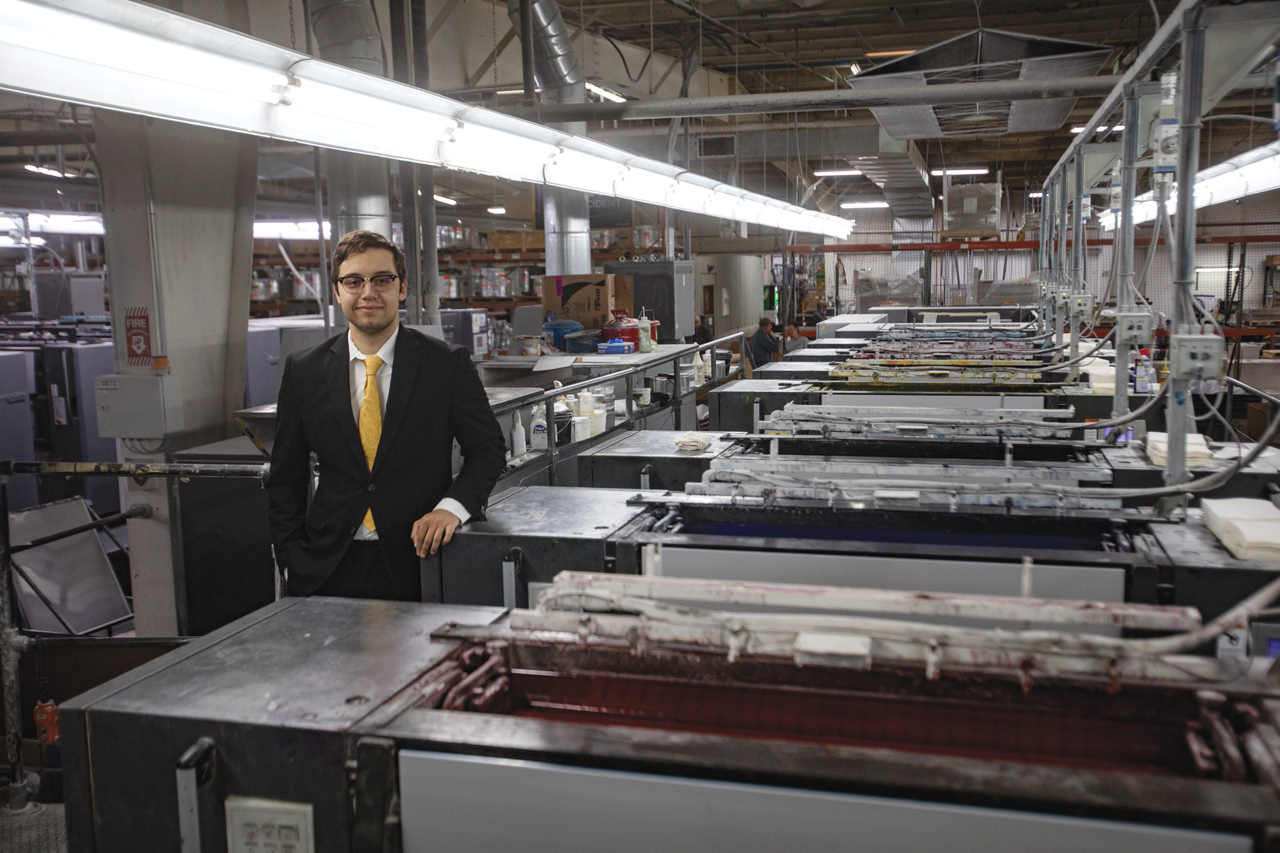 Jesus Oropeza stands in the Walsworth Publishing plant in Marceline, Missouri. Oropeza says he wouldn’t have the opportunities he’s had, including internships at Walsworth, without the Heartland Scholars Academy. Photo by Michael Cali.

The first time Oropeza felt like he belonged at Mizzou was in the Heartland Scholars Academy seminar class, whose purpose is to inspire confidence and overcome imposter syndrome. “A lot of times first-gen kids think: ‘I don’t fit in. I don’t have the network and experiences other students have,’ ” says Marrs, who also directs the Heartland program. “This leads to a lack of confidence in their ability to be successful at a place like Mizzou.” So, Marrs brings in successful alumni who were also first-generation students from small Missouri towns. She hosts etiquette dinners, mock interviews and study halls. They do case studies and go on corporate trips to Kansas City, St. Louis and Chicago.

In October 2018, only nine weeks into his freshman year, Oropeza was on stage at a Davenport Society banquet telling the giving-society members that he’d found community in the Heartland Scholars Academy; that without it, he would be lost; that he has hope. After a speech at a similar event for MU’s Jefferson Club in Naples, Florida, he was approached by Don Walsworth, BS Ed ’57, CEO of Walsworth Publishing Co., in Marceline, Missouri. Walsworth offered him a job, and, for the next two summers, Oropeza interned at the company, first in operations, then management.

Now a senior finance major, Oropeza has interned as a business analyst at Fidelity Investments; found a mentor in Nathaniel Laroche, a VP at Stifel Financial Corp.; and is preparing to sit for the chartered financial analyst exam. “This genuinely changed my life,” he says. “I know people, I’ve seen things that I probably wouldn’t have experienced throughout my entire life. If you try hard enough and get lucky enough, just about anything is possible.”

The Trulaske College of Business has been committed to diversity efforts for decades. Now, the college has hired an inaugural director of inclusion, diversity and equity to lead the charge. Erika Aaron, an experienced diversity champion with a master’s degree in business administration, stepped into the role in May 2021. Previously a faculty recruitment specialist with MU’s Division of Inclusion, Diversity and Equity, Aaron has been key in developing initiatives that establish and grow inclusive hiring pipelines and that attract diverse candidates through outreach efforts. At Trulaske, Aaron will expand her scope to include all college constituents. She will create programs that promote diversity and equity; provide training to faculty, staff and students; and bring best practices in inclusive excellence to ensure the college is a leader on and off campus.