Note: Any photos and video that do not depict current safety practices were taken prior to COVID-19 public health orders and guidelines.

Dani Major is uncharacteristically anxious. After all, she is a singer, a vocal performance major at Mizzou. But on this Friday night in late February, the sophomore is standing beside two fellow students on the stage of the historic Missouri Theatre, a tangle of frayed nerves. “I was smiling the whole time,” she says, looking back. “But I think I sweat 4 pounds.” 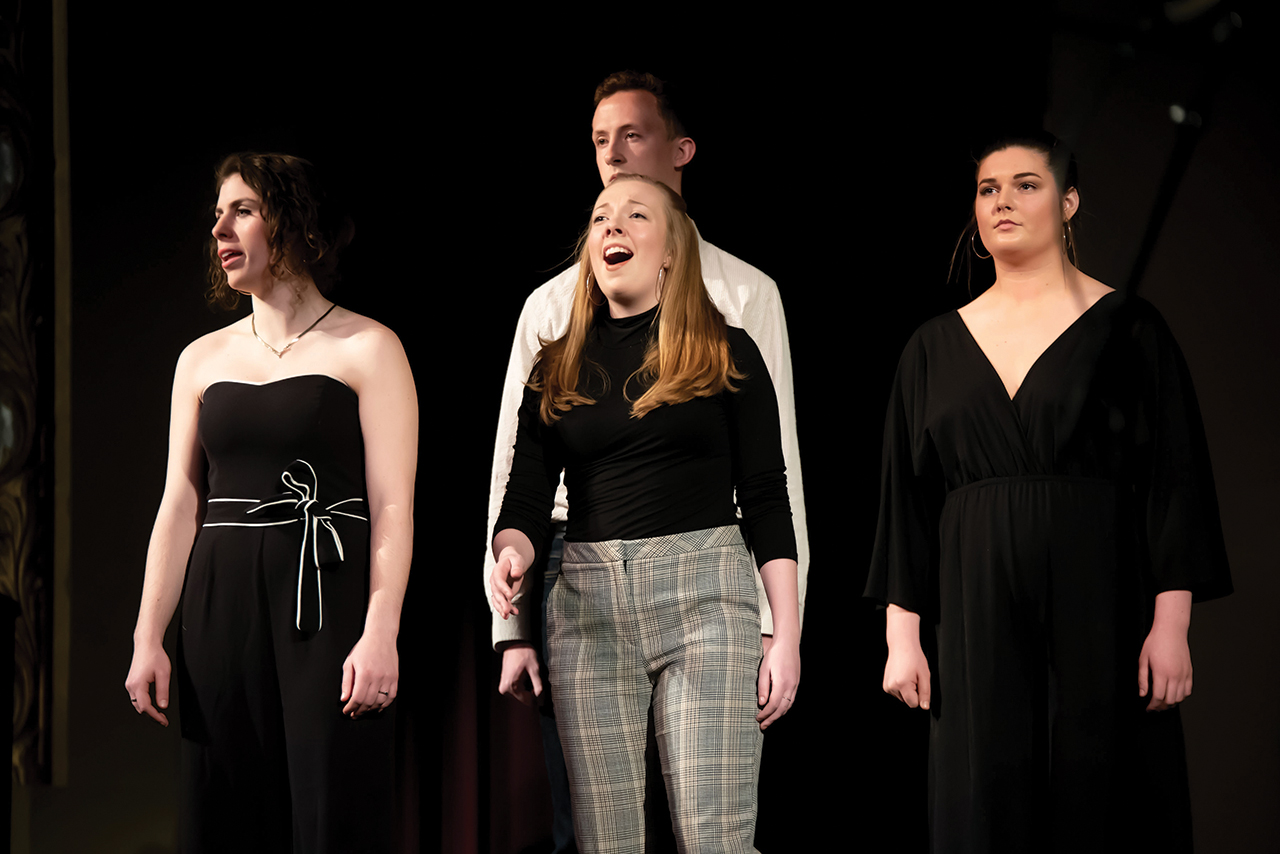 Part of Major’s unease was that she was vocally and mentally exhausted. This was her fourth performance in the Chancellor’s Arts Showcase, an annual concert for student musicians. Of the four, this number was also the one she felt least prepared for because it was a last-minute assignment. But the nervousness was also due to the fact that this was the headliner, the end of the evening, and she was singing backup for an emerging star, vocalist Alicia Olatuja, BA ’05.

Major and many of her fellow music students had been following Olatuja around campus all week. She had returned to Columbia as part of Mizzou’s Artist in Residence (AIR) program, a collaboration between the Museum of Art and Archaeology, School of Music, Department of Theatre, School of Visual Studies, and Department of English. The program invites established artists to MU to speak and work with students across those disciplines, imparting firsthand knowledge and experience while also supporting the arts. “It’s so important for us to advance the view that the arts are an industry,” says Marie Nau Hunter, AIR program coordinator. “For one, we’re promoting the arts industry. It’s also valuable because so many students who are majoring in these areas get this real-world experience to hear about. There’s no substitute.”

During Olatuja’s weeklong stay, she gave several seminars and master classes, sat in on a songwriting class, and worked with a jazz vocalist in a one-on-one rehearsal. “She was riveting, listening to her just talk,” Major says. “My friends and I went to every single seminar. She talked about getting started, her relationships and how the career path affects them, and how important it is to take care of your own health while traveling alone. And she talked a lot about how talent is only a small part of what it takes — work ethic is everything. For some of us, that was a relief, and for others, it was a wake-up call that we were being complacent.”

Olatuja brought the added insight of having been exactly where the students are right now. She graduated from the School of Music in 2005. She then moved to New York, where she attended the Manhattan School of Music. Since then, she has performed at Carnegie Hall and The Kennedy Center, recorded with Grammy-winning artists, and her solo at Barack Obama’s second inauguration in 2013 made her a worldwide celebrity. “I try to tear down the wall,” Olatuja says. “I am you in the future trying to talk to you now. I give them the real deal of it; that’s what I never got to hear and experience. Not just the horror stories but things that are unexpected, tools you need that you don’t know you need. When I answer questions, I try to give you the CliffsNotes so you don’t have to go through all of that or if you do, you can get the most out of it.”

During the visits, the artists-in-residence get something out of the experience, too. Not only do they get an opportunity to give back to the artistic community and shape young minds entering their industry, but they also have a chance to pause and reflect on their own careers. “It reminds you of where you were, where you are going, and it clarifies where you are,” Olatuja says. “Very few experiences offer all three at once.”

Olatuja’s weeklong residency also offered an opportunity to perform at the showcase for many of her former instructors. And it gave students, like Major, the chance to think like performers and professionals instead of students — including trying to learn and polish a closing number on short notice. “I thought, ‘It can’t be that hard,’ ” Major says. “It was.”

Like every other instructor on any other campus in America, Alix Lambert was forced to rethink her approach to teaching when the coronavirus pandemic suddenly shuttered classrooms and drove the work online. Fortunately for Lambert’s students, the mid-March shutdown happened just as their teacher was trying to turn their minds loose anyway.

Lambert is the AIR program’s first long-term resident. She is a renowned documentary filmmaker, artist and writer who worked on the HBO dramas Deadwood and John from Cincinnati, on which she served as associate producer. The School of Visual Studies brought her to Mizzou for a semester to teach and impart her experience working in the field. Her weekly classroom sessions looked at the portrayal of crime in both fiction and nonfiction. She had students watch films and listen to podcasts. Lambert shared her own work, including a film she is editing about the 1973 shooting death of filmmaker Jon Pownall and her new book, COURTROOM (A Graphic Novel), which contains her sketches and notes from sitting in on various courtroom proceedings. She even took her students to observe a live trial. “I wanted them to think about the moral and ethical decisions you make while telling a story about true crime,” Lambert says. “Especially when it’s about someone whose life is in the balance.” 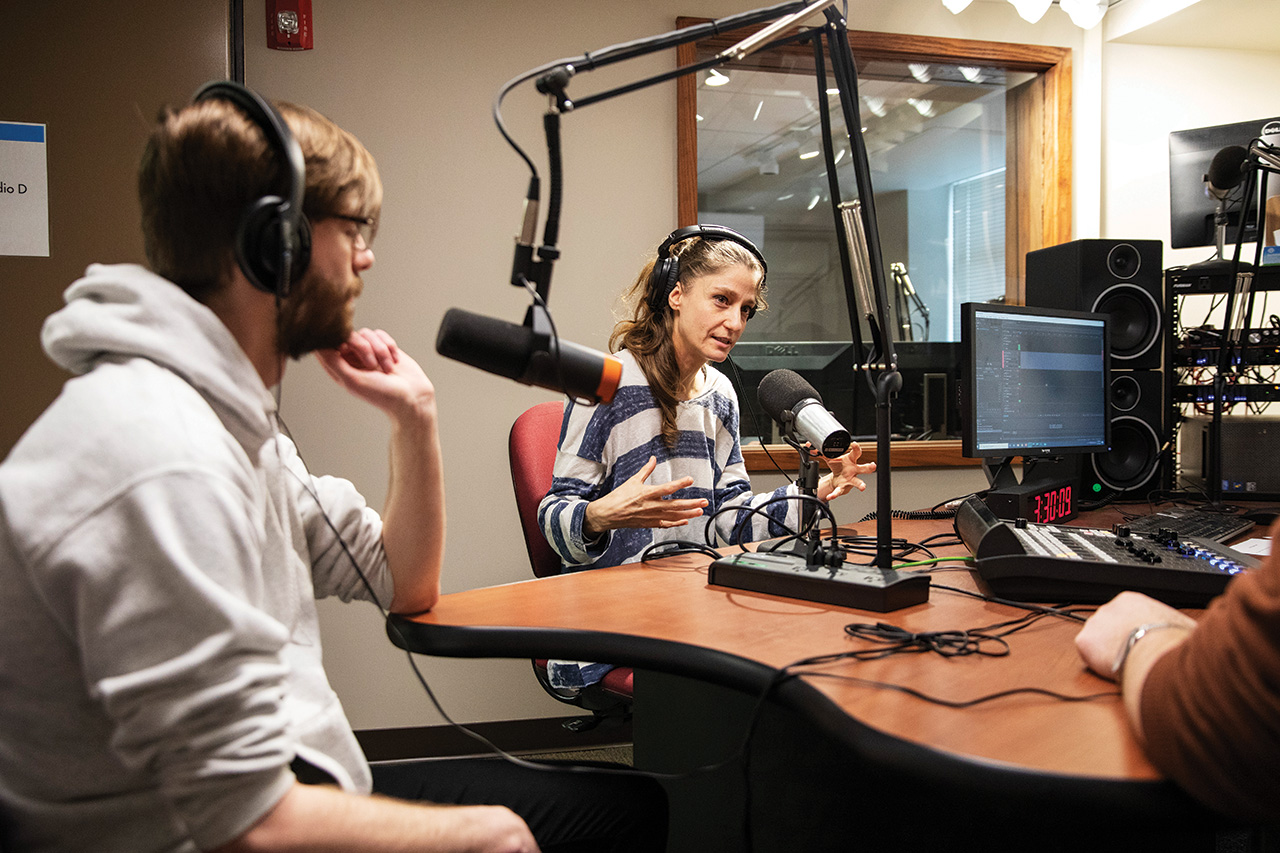 In addition to teaching a semester-long class in the School of Visual Studies, documentarian Alix Lambert, MU’s first long-term artist-in-residence, shared her experience and wisdom with classes in other schools and also appeared on a campus podcast, above, in February 2020. Photo by Michael Cali.

More than just experience, Lambert brought a real-world feel to her classroom. “For the first time, I felt like we were being spoken to as artists,” says Fatimah Krgo, a senior majoring in visual storytelling. “And we were almost helping her out, too. She asked us our opinions on her work, which made us more confident in our work. Our eyes were opened to a world we had only heard about.”

But in contrast to Olatuja, who wanted students to break out of the shell of campus and to think and act like professionals, Lambert let her pupils take advantage of the security of college. She assigned no final project or presentation. “I wanted them to experiment and push the envelope rather than thinking this has to be a perfect final project,” she says. “That’s an opportunity you don’t get once you leave school.”

Then came COVID-19. Lambert flew back to her apartment in Brooklyn, where she moved class discussions to Zoom. “Moving online really forced them to rethink what they were trying to work on,” Lambert says. “They don’t have quick access to human beings. I’ve been excited to see them all take on that challenge and not give up. A number of them were doing film work but suddenly had no actors. They rewrote so they could be on camera more themselves. Some even rethought what you could see and hear.”

Students say the timing made moving classroom discussions online easier. “The transition was pretty seamless,” Krgo says. “The whole semester, she wasn’t trying to force anything that didn’t feel natural. Out of all my classes, it felt the most natural.”

Through Lambert, students also got a weekly live look-in to the epicenter of the pandemic, far away from Columbia. For Lambert, her conversations with students were an escape. “Brooklyn is sirens all day and all night,” she says. “It was nice to talk about life and art. I feel like I get from students as much as I offer. I enjoy the exchange. It gives me an energy about thinking and engaging.”

Lambert had a wide range of experience to share with students, from her books to her documentaries such as The Mark of Cain, top left, and her work on television dramas, including the HBO series Deadwood, top right, for which she and her fellow writers earned a Writers Guild nomination in 2007. Courtesy Go East Productions and HBO.

As far as real-world experience, it doesn’t get any more real than working with the artist-in-residence. Just ask singer Dani Major.

During the only dress rehearsal, Olatuja had taken the three student backup singers to her dressing room at the Missouri Theatre to give them some advice. It didn’t matter if they messed up, she said, just stand there, smile and look confident. If you look like you know what you’re doing, the audience will just think you had a moment — if they notice at all.

Major tries to remember that as she stands sweating onstage behind the great mezzo-soprano. The song begins; Olatuja begins. Major, the top voice of the three supporting parts, comes in. But her compatriots don’t follow. “It was mortifying,” Major says now. “But as embarrassed as I was, nobody in the audience knew that we had messed up.”

“They froze,” Olatuja says. “They had learned so much music for that event, had crammed so much music into their CPU brains so quickly that they shorted out. But it’s good that it happened there. They learned something they didn’t know about themselves. They don’t have time for that in the real world.” 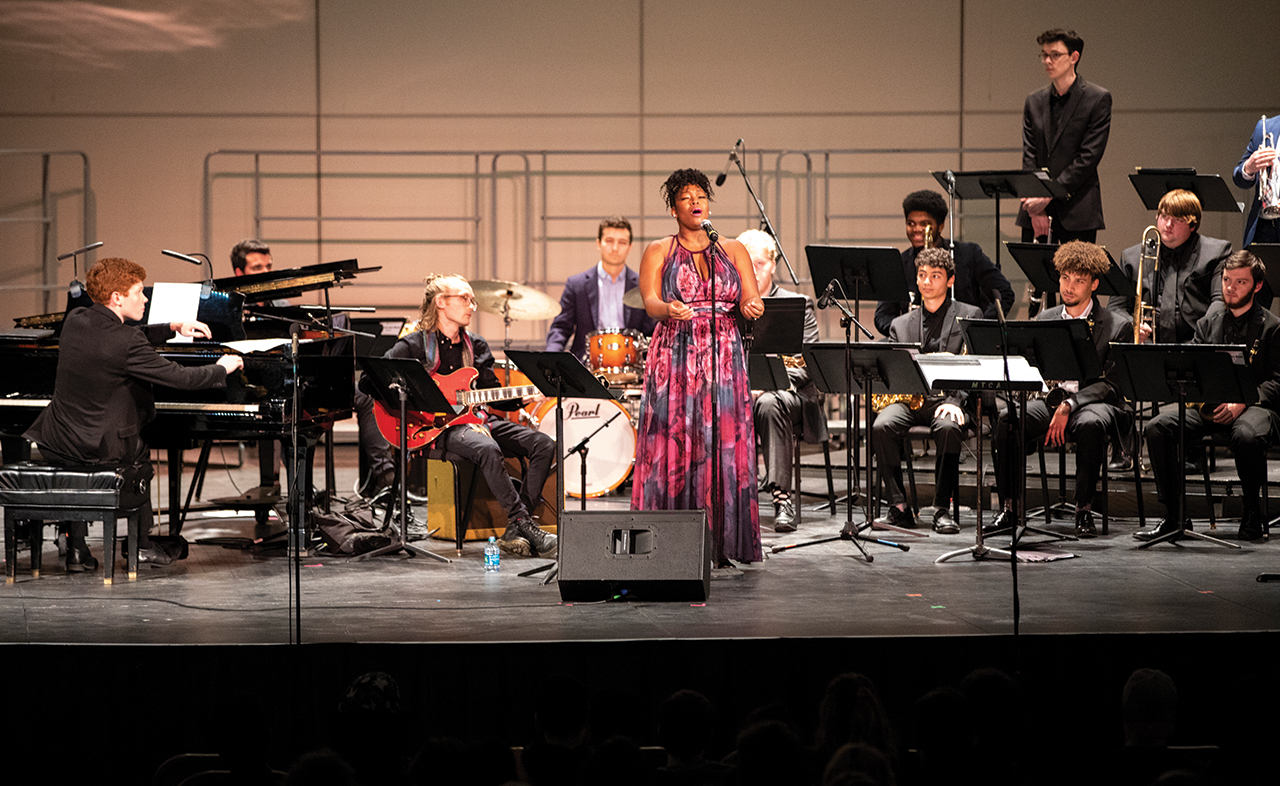 Olatuja performed with students at the Chancellor’s Arts Showcase in February. “A central part of our land-grant mission is to ensure art is available to everyone,” says College of Arts and Science Dean Pat Okker. “Through AIR’s strategic partnerships with organizations like the State Historical Society, University Concert Series, MU Health Care and others, the entire community gets access to unique art experiences.” Photo by Michael Cali.

About the author: Tony Rehagen, BA, BJ ’01, has written for GQ, The Columbia Journalism Review and Next Wave: America’s New Generation of Great Literary Journalists. His last story for MIZZOU magazine was “Dashing Hope,” about MU’s first Olympic medals a century ago.