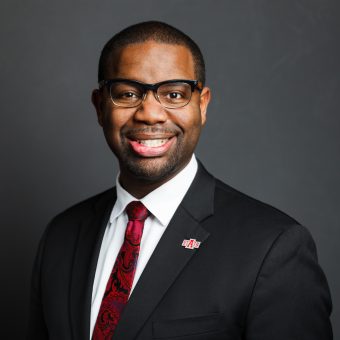 Maurice Gipson has been named vice chancellor for Inclusion, Diversity and Equity at MU.

“I am quite excited about the opportunity to come to Mizzou where there is an infrastructure already in place for advancing inclusion, diversity and equity on campus,” Gipson said. “It is an incredible opportunity to immediately advance our work and take the university further on its journey toward inclusive excellence.”

Gipson starts his new position July 15, 2020, but will participate in some university activities prior to that date. NaTashua Davis, who has served as interim vice chancellor for IDE since July 2019, will return to her position as executive director of MU’s Access & Leadership Development Unit.

“I want to thank NaTashua for her willingness to serve in such a critical role for MU,” Choi said. “We’re grateful for her service and appreciate her insight and support to our students, faculty and staff during this important time.”

Mizzou has made significant strides in recent years in the areas of diversity, inclusion and equity. Since 2017, the graduation rate among African American students has risen from 51.9% to 58.4%, and the graduation rate for Hispanic students has risen from 63.5% to 66.5%. Also, underrepresented faculty – including African American and Hispanic - have grown by 32% since 2015, from 140 to 185 faculty members.

As vice chancellor for Inclusion, Diversity and Equity, Gipson will be charged with continuing the work to improve MU’s culture of inclusion, including advising the campus on recruiting and retaining students, faculty and staff that enhance the university’s community, expanding existing programs that encourage underrepresented groups to study or work in various disciplines, and improving or developing new training programs for the campus community.

“My thanks to search committee chairs Mike Middleton and Pat Okker for their stellar leadership,” Choi said. “They have found a talented candidate to help Mizzou move forward, and I appreciate their hard work on this important hire.”

During his visit to Mizzou this spring, Gipson said he was impressed and encouraged by the meetings he had with administrators and staff, noting their commitment to inclusion.

“Everyone I encountered truly wants the best for Mizzou and the state of Missouri,” Gipson said. “That was the decision-maker for me. This is a place where I can go and be a part of a team that is already doing hard work and is focused on doing it right.”

Gipson also served two years as a special assistant to the vice president for Diversity and Community Engagement at the University of Texas at Austin. While at UT, Gipson developed curricula for My Brothers’ Keeper Presidential initiative that reached more than 100,000 minority young men and planned and implemented the first Black Student Athlete Conference. As the special assistant, he was responsible for interacting with community members to advance community engagement goals. He coordinated and supervised efforts to support the academic advisement, academic support services, orientation, retention, and career planning and placement of minority students.

Gipson also served as an institutional advancement and diversity consultant at Langston University in Langston, Oklahoma, where he developed a strategic plan to address poverty in the state. Prior to that, Gipson was a student diversity coordinator at Louisiana State University in Baton Rouge, Louisiana, where he was responsible for developing a sustainable mentoring program.

MU’s Division of Inclusion, Diversity and Equity includes the offices of Access and Leadership Development, Accessibility and ADA, Civil Rights & Title IX, the Gaines/Oldham Black Culture Center, the LGBTQ Resource Center, Inclusive Engagement, Multicultural Center, Relationship and Sexual Violence Prevention Center, and the Women’s Center. The division’s work is guided by the Inclusive Excellence Framework that reaffirms MU’s commitment to growing and sustaining a diverse and inclusive environment for all faculty, staff, students and visitors.